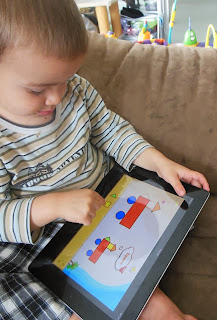 Again I have been amazed to watch how much Hezekiah is learning on the iPad. I have bought the odd application but mostly have gotten free ones (some that are free for 1 day as a promotion). This app has been so much fun. He has a pattern to copy but he does not even look at it. He can see where the shapes fit. As he drags the shapes off the bottom row it reads out the name of the shape. So eventually he is going to know loads of shapes names too. Not to mention the amazing perception this is developing in him. The pictures start out simple and then get rather complex. Sometimes he gets stuck the first time he does a new picture but then we say "look at the example" and he quickly sees where to put it. What a blessing technology can be. 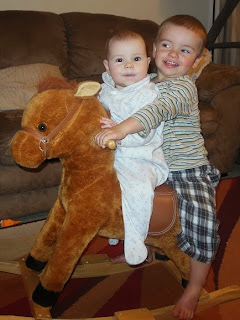 Such a caring brother - Asher was looking with longing at the rocking horse and so he asked me to put her on in front of him so she could have a ride. 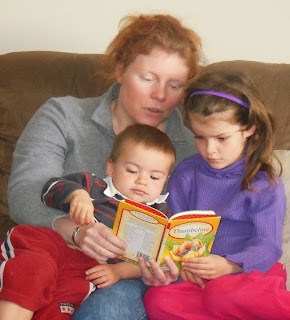 On Tuesday Liz contacted to ask if it was possible for her to come for a visit. I had no idea she was in NZ and would be leaving on Saturday already - so it was a last minute arrangement but such a blessing for us to have her come and stay for 2 nights. Hezekiah was younger than Asher is now when we last saw her. The girls all remember her fondly and were so excited about having her come to stay. 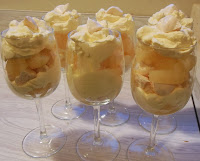 They were also thrilled when I produced this for desert on Wednesday evening. I only had tinned pears for this adaptation of an "Eton Mess" and it went down really well. I had made a batch of sugar free meringues - so the girls were thrilled to be getting some more of them in this delicious desert. The meringues are sugar free because I use Xylitol which is a natural sweetener (no chemicals) and so they are lovely and sweet and have become a favourite treat with our girls.

Liz joined the girls with their chores in the afternoon - here taking water to the horse over the road. The only reason Hezekiah could go with was because there was an adult along. So he was SO pleased.
For more details on Liz's visit and all her photos you can have a look here. 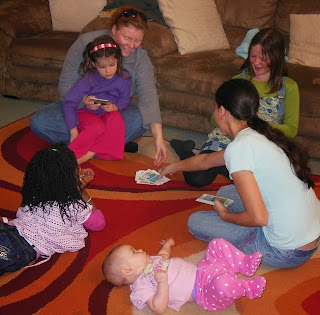 Enjoying introducing Liz to our great Bible board game.
We ended up having a rather busy afternoon on Thursday though. Just as I was dishing up dinner I got a phone call from the lady who lives in our previous rental place. Tiger, Rachel's cat, had just kept going back to live there and even though we had tried many times to find him we had not heard or seen him in a very long time. After the last time he headed back I had asked Brendon on a number of occasions if we could stop at the house and see if we could call him. Never successful in even getting a glimpse of him. It was at this stage that I really cried and realized how much I enjoyed him and missed having him as part of our family. I had to accept that he just was not comfortable living here in the village with all the other animals around (horses, donkeys, dogs and cats - one of which would come through our cat flap at night). 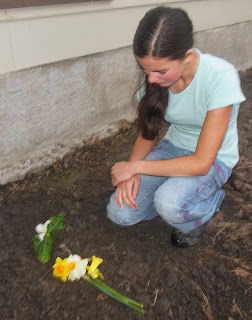 The lady said that Tiger was at the house but hurt very badly. She chatted to Brendon and then he headed over with his gun so that he could stop his pain. Tiger's back had been badly broken and he was suffering terribly. As soon as Brendon got back I told Rachel she could go to him. Brendon and Rachel then buried Tiger. It was so very sad for Rachel but there were so many things we could be thankful for. After bible study we actually spent some time chatting about it and I think it was very healing.
We are thankful that Tiger managed to drag himself back to the house after he was hurt. He did not suffer alone in the fields (Brendon wonders if he was perhaps kicked by a cow). We are thankful the lady was home because she has spent many months away over the last year and a half. I was thankful that Brendon said there was no blood. So his fur was still lovely and Rachel could wipe him and have a good last picture of him. 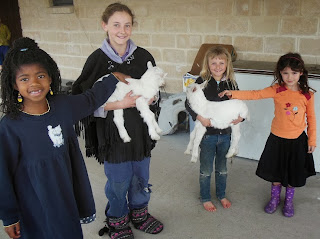 We spent time talking about some of the wonderful memories we have of Tiger. I have never really been a cat person (even though we always had cats when I was growing up) but Tiger had a special place in my heart. He was such a unique and special cat (in character and appearances). Of all our animals he will be one I will always remember and thank the Lord for the time we got to have him in our home.
After our lovely visit with Liz we took her back to the airport on Friday morning. On the way home we stopped in to pick something up from the Fawcetts and enjoyed a quick visit. These baby goats were just a couple of days old (the one was just 1 day old). 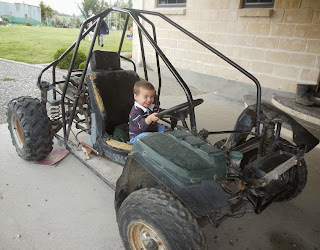 Obviously this was a highlight for Hezekiah. 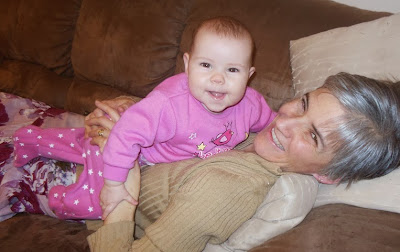 Cuddles and kisses for Mum. 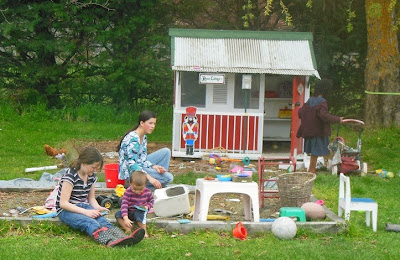 On Saturday Briar came around for visit again. She is really good with Hezekiah. So great that they can all play so nicely together. 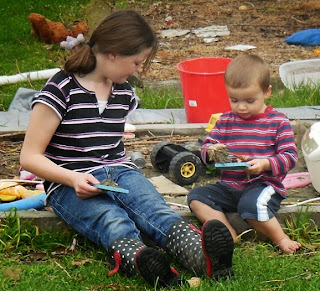 Hezekiah's imaginary play developing so wonderfully with all these older children to play with. 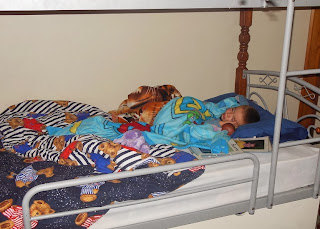 We decided to move him into a "big bed" today. He is so excited about his "new bed". I think we are over the "unpacking draws" phase - so I think it's finally safe for him to be in here. I also think that if he does climb onto the top bunk - he will call if he does not feel sure about how to get down safely. I think for now he is just so pleased with his bed that he has not been tempted to do any exploring. 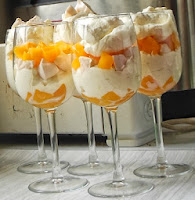 The girls were thrilled when I said I would make another "Eton Mess" for desert after lunch on Sunday. This time with some tinned peaches (I made sure I got a couple of tins the last time I did shopping). We had to use up the last of the meringues. ;-)
Posted by Buckland at 10:00 PM