We will miss you Grandpa

Monday 29 April
We chatted to Nana on Skype this evening (morning for SA). I got to have some time with the girls out the room so that I knew she could speak freely. She said that Dad is not going to come out of hospital. He is just too weak, the infection to strong and now pneumonia possibly on top of it all. She said she had left instructions that they must not resuscitate him. She understand that they have taken an oath to do all they can to save a life - but she said it is not worth it. He had the op for throat cancer last year this time and she says it's been a struggle for him the whole year. He is so weak now and she believe all his organs are shutting down. She said if we could see him we would understand.
We got confirmation of this as Trevor (Brendon's brother)  saw him yesterday and said he was surprised he had made it through the night.
At our evening prayer time Brendon told the girls that Grandpa was dying and that he might not even live through the night. He explained a bit more but they know that he has been struggling and they know he has been in hospital. Hannah started crying and said "I want to be there". Oh Hannah - how you have said what we all feel.
Rachel and I shed many tears this evening too. It was a blessing to hear each one of them pray for Grandpa though.

So although it was emotional for them to hear - it was a blessing as they could join us in our earnest prayers for him.
When they got into bed I could see the tears in Ruth's eyes. I think she had kept up a strong face and so I wanted to make sure I got to speak to her individually too. I got her a tissue and just hugged her as she cried. I asked her to talk to me and tell me what she is feeling.
She said she is just so sad about Grandpa. Even though she put on a strong face - her little heart was breaking just like the rest of us. I am glad I could get to have a little chat with her and give her some comfort too.
Tuesday 30 April and into our Wednesday
At midnight I got this message from Nana. "Infection down from 260 to 146 so to speed healing Dad in ICU for a few days." Thank you Lord for answering these granddaughters prayers. They were all so pleased to hear the good news in the morning. They know he is still very sick and so we will all continue to pray.
I knew it would be a day of not getting news as everyone slept in South Africa. At 6pm we called Nana (8am in SA) and got an update from her on how he was looking on Monday afternoon. 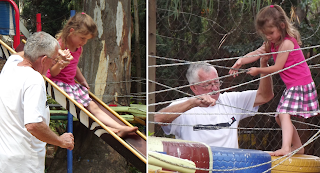 She said the oxygen was making a big difference and his colour was looking better and he just looked better. Brendon and her chatted a bit about Brendon going over and she said "maybe he will be sitting here next to me chatting with you next week."
The children then had some time just chatting to Nana and it was good to see everyone smiling and getting that time together. She said she would text me once she had gotten to the hospital and seen how Dad was doing today.
As it approached 10pm for us (when we normally start heading to bed) I sent Nana a text to ask how Dad was doing. She wrote back "not good at all. am sitting with him."
Just minutes later he passed away. We organized to chat with her later (the next morning for us) and then after Brendon and I chatted for a while we "tried" to get some sleep. At 5am Wednesday morning (7pm Tuesday evening in SA) Brendon and I got to chat with her. It was good for us to see her face to face and know that she was coping ok with it all.
She got to share with us details of his last minutes and it was so good to know that she was with him and that he was peaceful when he passed away. With the struggle he was having with his lungs it was such a blessing that he had been moved to ICU as she said his breathing was so much better. He did not have the mask on at that time but was still able to breath easily and for that I am very thankful. It was just a matter of his heart just stopping and him peacefully slipping away. 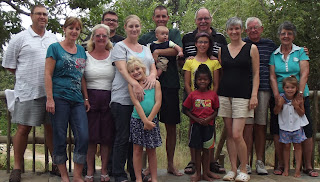 I was thankful for the time I got to spend with Brendon before he headed off to work. To be able to share in his heartache and tears and to acknowledge the big gap that is going to be left in our lives. He will be very greatly missed.
Even though the family in SA did not expect Brendon to come over, he had finally decided this morning that he must go back for the funeral. My biggest concern was that he would regret not going and he agreed that it would be better for him to go. That he needed to go. 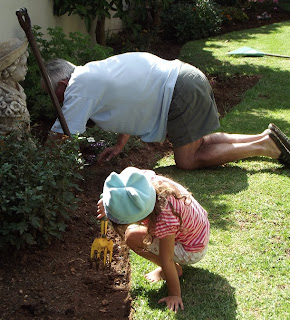 It has been a blessing to me to have friends from all over the world praying for Dad through these last days of struggling and now to have all their prayers and condolences after his passing. Thank you to every one of you.
And as I said on fb today:
God has shown Himself so faithful and is a true comforter. We have been able to see many blessings from Him through this time and know that He is teaching us all and drawing us closer to Himself.
And:
I have booked tickets for Brendon to fly back to SA next week.Thankfully we can pay for them (or change them) on Friday once we know for sure when the funeral is.Thank you to everyone for your messages. 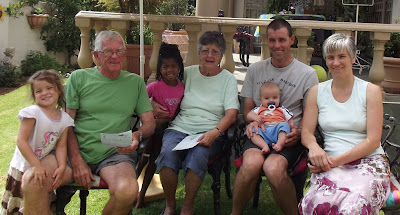 Dad will be very greatly missed but we also know that this last year has been very difficult for him physically. He told Mom just a couple of weeks ago that he was tired of it all. His body had just had enough. He had a major operation at the beginning of April last year for cancer and spent just short of 2 months in hospital recovering from that. So although it is a shock for us all, we have also had time to adjust - especially Mom.
We are so very thankful that we got to visit the family in Feb last year before he got sick and so the girls have many wonderful memories from that time. I thank the Lord for this. 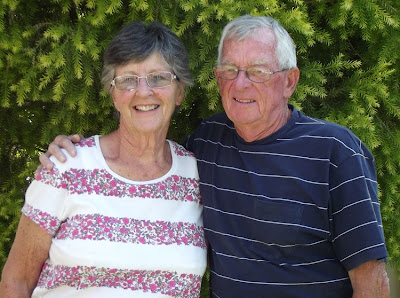 The girls will all miss him very much and we are sad that Hezekiah and Asher will never have the chance to get to know him. At least the older ones will be able to tell them many wonderful stories of time spent with him.
Posted by Buckland at 10:00 PM

Our condolences to Brendon and you all - what a heartache. May the Lord bless and strengthen you, Belinda, as you are on your own for a short while. What a special post with so many photos of his dad.