And that wraps up April 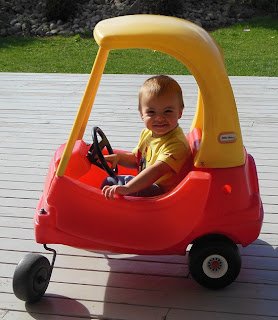 Friday 26th: Toy library time again today and Hezekiah just LOVES this car. By far his most favourite item yet. I can see us keeping this for at least 4 weeks and then perhaps having to get it out again a couple of weeks later. The sweetest for me was when he told me to give Asher a ride. I told him she was too small but he insisted. So I got her sitting on the seat (holding her there) and he gently pushed her around. What a wonderful big brother you are already.
And talking about Asher - I got her under the play gym for the first time today. There are just so many people in this house to hold her that I had to make an effort to get her to spend time on her own. :-) She is just over 2 months old and is reaching out to the toys so nicely. Hand still tightly closed (but it did not take long for her to learn to open her fingers and start grabbing the toys).
Also take note of that sweet little tongue sticking out in concentration. Definitely her Father's child. :-) 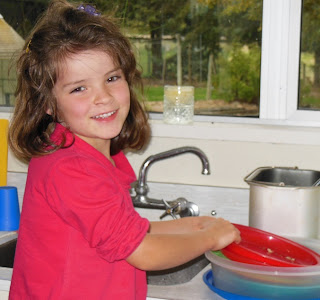 Hannah has been allowed to take on the task of lunch dishes now (as there are only plastic plates used). She is just THRILLED. I am sure she could have done it sooner but I also needed to make sure I had the energy to supervise and teach her to pack them in the dishwasher properly (and life has been just a tad busy lately). So Ruth has now moved to breakfast dishes and so Rachel is also THRILLED as that's another job of hers handed over. 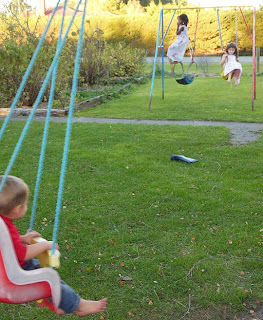 Hezekiah has gotten to swing on the new swings a bit but they are more for the girls so that they don't put too much weight in his plastic swing. Now all three of them can swing together. And the new swing set doubles up as a climbing frame too.

The slide is a small toddler one which Hezekiah loves. I had to spend a bit of time with him showing him how to use the wall with the holes to climb up so he could get up onto the little platform. It's actually nice that it is just too high for him to get on - as it has really helped develop those climbing skills. 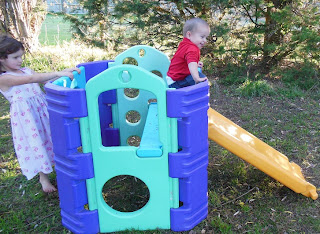 Hannah and Ruth enjoy playing on it too. I can see Hezekiah having loads of fun on here though. Just today he spent ages on it - up and down, up and down. Such a great way to get rid of some of his energy.
During the week Hannah got stung by two wasps - two stings each. Brendon had found the nest but as it was in the ground he could not really do much about it.

So today we had someone come over to sort it out. Hannah was rather traumatised by the experience as it was so painful. Thankfully I had heard of a friend treat a bee sting with glyconutrients and he had such great results (previously he would react terrible and this time he did not even have a reaction at all). So I gave her high doses of glyconutrients and it was amazing to just watch the swollen red area just disappear over the next hour or two. She felt much better knowing they were gone. 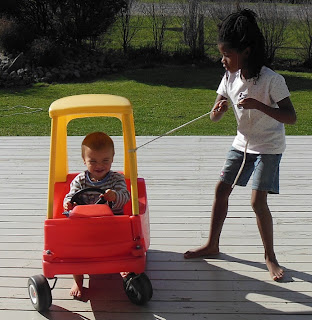 Sunday 28th: The girls seem to always work out a different way to play with toys. This time it's getting Hezekiah to go really fast in his toy car.
I took a video (below) as they were having so much fun. It also shows why we ended up with a bit of a science lessons on centrifugal force (although the actual name did not come into it). Ruth then put the rope on the other side so that the door would stay closed when they swung him around.
And while we are looking at videos - here is another one I forgot to load from earlier this month. 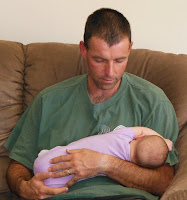 We finally got a quick video of Hezekiah doing his favourite thing on the keyboard - getting the demo to play and wiggling around to the music.
Brendon enjoying a little shut eye with Asher after a nice Sunday lunch. 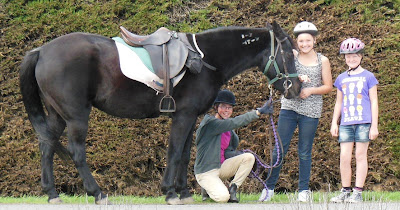 Rachel enjoying some time with Auto and her friends. 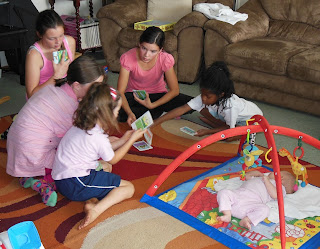 Monday 29th: Rachel has really enjoyed these holidays with having friends come over. It was also nice that this week they spent a lot more time at our house - so Ruth, Hannah and even Hezekiah got to enjoy time playing with them too.