This and that through the week 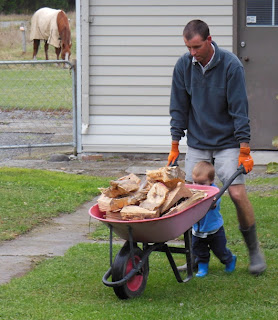 Thursday 18 April: Daddy's little helper. He does a good job at helping Dad load the wheelbarrow. Always nice to feel like you are helping to push it too. :-)

And he wants to be a part of every bit of the job. I am so thankful for Brendon's patience with getting the children involved like this. It would be much quicker to just do it all himself but he is spending the time teaching Hezekiah how to be a good worker. And yes - it starts well before a child is even 2 years old. What special memories too. 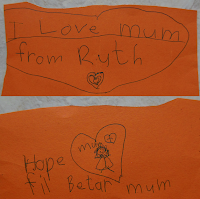 I am not sure who was more pleased to get the Zumba DVDs out again (after well over 2 years of no use). Ruth was so enjoying it with me and was disappointed today that I could not do it. She made me this sweet card as she knew I was not feeling well.
I had the start of Mastitis and the accompanying fever and body ache were really unpleasant. Thankfully I managed to get it sorted really quickly and just had the painful blocked area to deal with for a day or so afterwards. 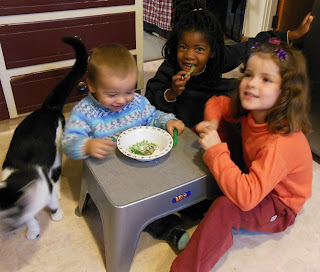 Friday 19 April: Often Hezekiah is just so eager for dinner before it's ready that I give him a bowl with some frozen veggies in to "keep him going". The children all like having a few frozen pieces and so he sat and shared with the girls.
You can see he has his own spoon ready in his left hand. As soon as he sees that food is on the go or almost ready he opens the draw and gets his spoon and fork out. This little boy sure does LOVE his food. I think I might need to get him helping Hannah set the table as he loves getting things out before dinner is quite ready. :-)

Sunday 21 April: Hezekiah already has a page up on the "chore board". I started it the previous week as I could see he was wanting to also be able to tick and put stickers on. So we got him started - putting ticks on every time he used the potty. We had put him in disposables a couple of months before Asher was born and just left potty use as it was getting too hard for me (he is just so heavy and I was still picking him up onto the changing mat). I decided I was ready to try and get him back to where he was 4 or 5 months ago and so he went back into cloth nappies and this page has been a great help. 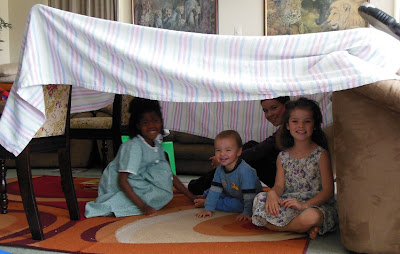 Monday 22 April: For the first time I have really been looking forward to school holidays. It means no ballet trips for two weeks and just an easier schedule with no extra singing lessons at school either. And what better way to enjoy a holiday at home than with indoor tents. :-) 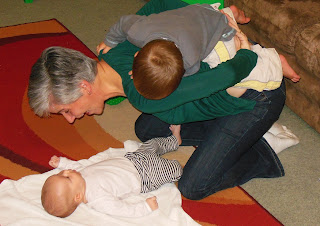 If I get down on the floor to chat to Asher it is a sure thing that I will end up with Hezekiah on my back.

The photo makes me think of the one Brendon took in 2008 when Hannah was just 3 months old. Ruth was a month short of 2 years old. 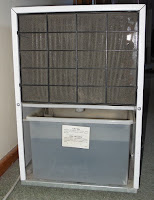 Tuesday 23 April: I had been concerned that the dehumidifier was not working as I was not seeing water adding to the bucket after a number of days. So I dismantled it today and saw the filter (behind those elements) that was totally blocked up. I used my vacuum cleaner to suck all the dust out of it and it works so well now that I got this much water out the air in just 1 DAY!!!!!! I suspect it has never worked as well (perhaps why it was sold 2nd hand on TradeMe in the first place). It's always so nice to see leters of water removed from the air. Just that little bit less moisture in the house through winter (and that little bit less mold on the window frames). 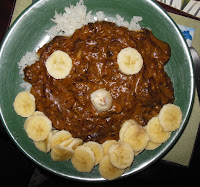 Wed 24 April: Curry and rice for dinner tonight and the girls were thrilled with the way I placed everyone's slices of banana.

Thursday 25 April: Anzac day today but unfortunately Brendon was working the whole morning. Noortje asked if the girls would like to go and do the run / walk with her in Waikari. I was concerned that it would be too far for Hannah but good practice for Ruth who is looking forward to the upcoming cross country. Ruth ended up walking with Noortje rather than running - but had a fun time out. 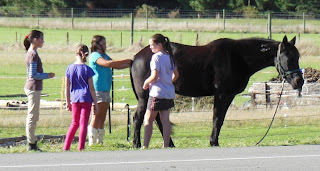 Rachel was not really interested in going as she had a fun time with some girls from the neighbourhood (2 here because it's holidays). I did not get many photos but they spent MANY hours together through the 2 weeks.

Trying to get those lovely smiles on camera. Not quite capturing it though.
Posted by Buckland at 10:00 PM