16 years and the rest of the week 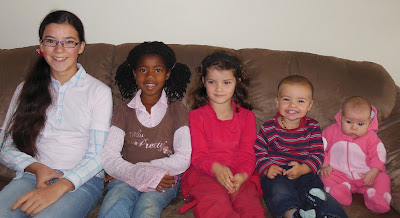 Thursday 2 May: Monthly children photo. At least it was cold enough for Asher to wear this cute outfit - even if it's just the once (it's actually already a bit too small). Hopefully it won't be too long before we can get her smiling for these photos. 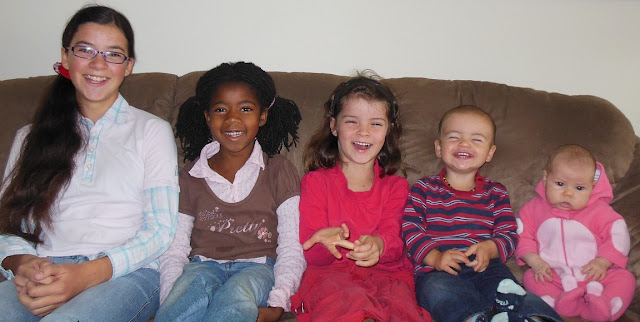 I like this one too as it captures the fun Hannah and Hezekiah have together. 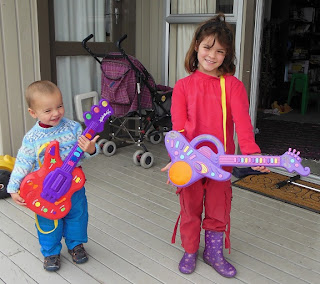 They are both "full on" and have so much loud fun together.
A new "loud fun" time is playing on these 2nd hand toy guitars I got them. They have a Wiggles DVD that is called "Ukulele baby" and there are a number of songs with them playing ukuleles  Ruth and Hannah love copying the people on these types of DVDs and so to copy the ukulele playing they would pick up old keyboards we had and pretend that was their instrument. I thought it would be much nicer for them to have a "real" instrument to play on. So far Hezekiah just loves the "demo" button and dances along to the music they play. 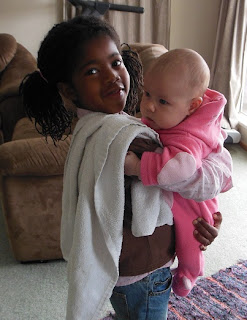 Big sister Ruth is always ready to pick Asher up. She has always loved babies and is thrilled to be big enough to do so much "on her own" now. Such a sweet big sister. 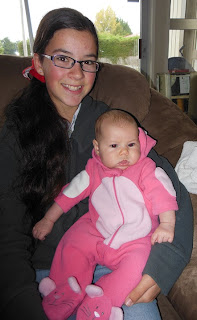 And the other big sister. Nana had complained that I did not have enough pictures with Rachel and Asher - so here is one especially for you.
Rachel has never really been a "baby" person so she does not naturally spend a lot of time with Asher. She has however been spending more time with Hezekiah and their relationship is growing wonderfully. She has managed to get a very special spot in his heart and it's so precious to watch. 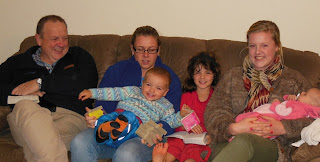 As Bible study started Asher was due for a sleep. I decided it may be easier to just have her sleeping in someone's arms while I supervised Hezekiah. Katy is here on holiday and so she was thrilled to get a cuddle.
Friday 3 May. Unfortunately I felt mastitis starting up on Thursday evening. It hit me really suddenly and within 30 minutes I had a terrible fever, body ache and just felt terrible. So Friday, our 16th Anniversary, was a hard day for me. I really felt like I had been hit by a bus - it was so horrible. I phoned the doctors room and thankfully managed to organize antibiotics over the phone (I just knew it was worse than I had every had before and I had to deal with this quickly). A friend even went and picked them up for me (along with strong pain killers). 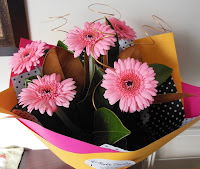 I spent most of the day in bed and was just coping from one does of pain meds to the next. We had a dinner booked for the evening for our anniversary and I think I convinced myself that I was feeling well enough to go. As soon as I had one bite of food though I realized how ill I still felt. I was glad we got to go out and at least I did get to enjoy my meal the next day for lunch. With Brendon leaving on Monday morning for SA - I didn't want to miss out on this special time with him.
When we got home there was this beautiful bunch of flowers from a dear friend in condolences for Brendon's Dad passing away. So very kind. 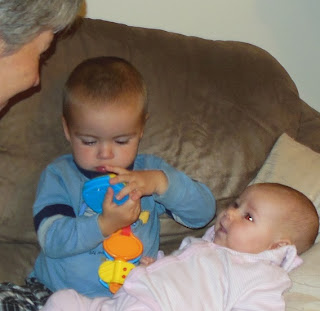 Saturday 4 May: I was feeling much better on Saturday but still had to take it really easy. From lunch time I was able to stop taking pain medication - so I knew improvement had come. My temperature went up for an hour or so in the afternoon but I was very grateful that it come down again so quickly.
Hezekiah often wants Asher to sit on his lap. This evening he enjoyed showing her a toy. 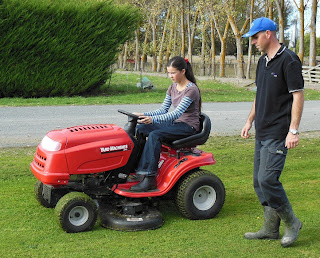 Sunday 5 May: Brendon was working yesterday morning - so he did not have a full weekend to get things done but really did make the most of the time he had. He wanted to do as much as he could around the house to make it easier for me in the week ahead. The grass was dry enough to cut - so he was very pleased to get that done too. Rachel was very pleased to find her legs are finally long enough (the break is quite far). Brendon supervised her a little but did most of it himself. 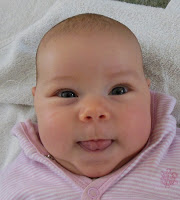 I am sure he will give her some lessons on it once he is back and she may get the job in future (she has been so looking forward to getting this job).
I am still trying to get one of her lovely smiles on camera. :-) 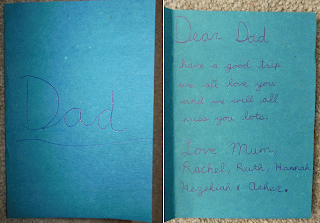 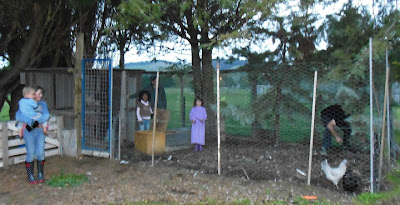 Rachel made this card for Dad and put it next to his bed today. He leaves at 3am tomorrow morning and will get back next Sunday at 10:20am. Rachel was rather emotional saying goodnight to him. I am sure the regular Skype chats will help us all though.

To add to the jobs for today - at very last minute we did a trade for some new chooks. The lady is moving and these are the "naughty" chooks who like getting up into the trees (she does not keep her chooks in a run). So Brendon quickly fixed up some weak areas in our chook run, caught our old chooks to give away and clipped the new chook's wings when they arrived.

Briana visited for a few hours today and it was nice to see her just getting involved with our girls - helping with the raking up of leaves ect. Here she is holding Hezekiah who was a little upset that he could not be in there with the others.
Only after I had taken the lists down did I remember I had not taken a photo. Just to show the girls did actually have a break for the holidays (the top two have those shaded areas - school work that did not need to be done). Also a nice record of the wonderful improvement Hezekiah has made with his potty training. He really does just LOVE ticking (when he uses the potty) and putting stickers up (when his nappy is dry or he does a poo on the potty).
Posted by Buckland at 10:00 PM