Lesson for a lesson 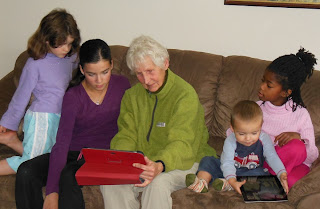 Monday 20th: Ruth and Hannah often head over to Noortje for a visit after lunch while the younger two nap. Ruth often gets to have a piano lesson or at least get to practice on her piano. Today Noortje came over to our place after the visit so that I could give her another lesson on her new tablet. It's nice that I am able to help her in this way and give her something for the lessons she is giving Ruth.
I had downloaded a free app for our iPad a while ago with "flashcards". Hezekiah has really been enjoying it this week and scrolls through especially the animals and the transport section. They have sound effects for some as well as the name for each read out. It's been amazing to see how his vocabulary is increasing from the time spent pages through the pictures and hearing the names. 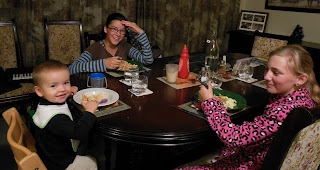 He is trying to say a lot more words now and many sound rather good. :-)
Tuesday 21st: Louisa came home with us after Ballet today. Her mum has a meeting once a month so rather than her having to get home after 9pm, she comes and stays over at our place. Hezekiah was showing off while they had their dinner and decided to eat some more of his - sitting on Hannah's chair. 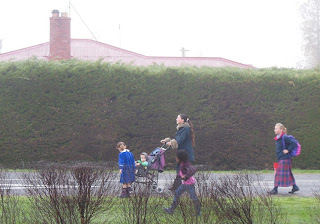 Wed 22: The children (except Asher) walked with Louise up to school this morning  They were not put off by the mist.
I am so thankful for such a good pro-biotic  I had started it myself when I started on my antibiotics but had not thought of giving it to Asher as well. Her stomach has not been right since I started the meds and only when chatting to a friend yesterday (Rachael - Louisa's mum) did I realize how important it was for little Asher too. Within 24 hours I can see the massive improvement it has made for her and I am just so thankful to have finally gotten her started on them. 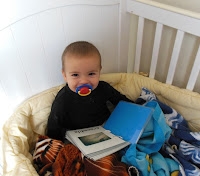 Hezekiah often asks to sit in his bed with his dummy when Asher is sleeping in the morning. He doesn't sleep - just has a little rest. His favourite thing is to sit and page through these picture "books" that I made for Rachel. He loves the fact that the back of the pages are blue - his favourite colour. 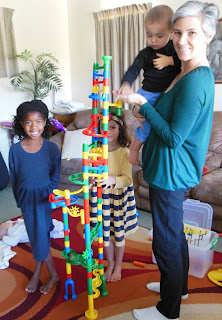 Thursday 23rd: Noortje sent me this photo of Ruth and Hannah watching the piano tuner at her place at one of their "after lunch visits". She is getting rather good at using her tablet (she took the photo with it and e-mailed it to me - I was rather impressed). 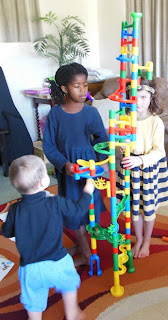 The girls played with the marble run while Hezekiah was sleeping this afternoon. When he got up he had some fun using the ones they made but with him not being as careful he kept bumping them over. So I gave them some tips on making a nice solid base and ended up just getting higher and higher. Hezekiah just loved it.
I made an extra "entry" for him that he could reach. It was getting hard to keep lifting him up to put the marbles in at the top. 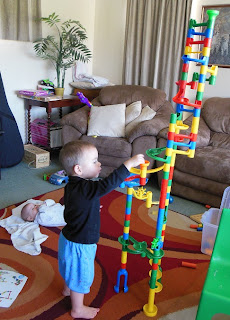 It was lovely to see how much fun he got out of this - even after the top part broke off when he bumped the whole thing over. He would just keep putting the marbles in over and over again. It does make a lovely sound when there are a number going at once. 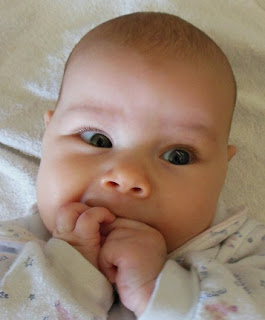 Asher just loves putting her hands in her mouth.