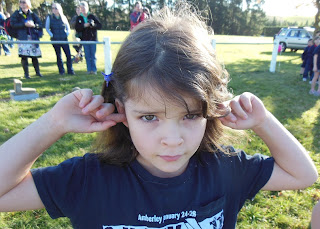 Ruth has really been looking forward to the cross country with the local school and we were all pleased it was such a beautifully clear day for it today. She was a bit disappointed with the cold weather the last month or so though and has not gotten to train as often as she would have liked. Hannah had not decided if she wanted to run or not and finally said she did this morning. She almost changed her mind though when she saw the man with his big gun. She was comforted in the fact that there were other young girls who were also not looking forward to that big bang. 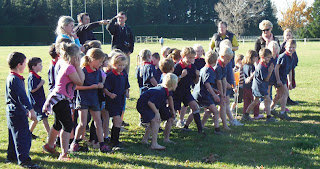 So she stood with a few other girls - blocking their ears while the gun went for the older children. Thankfully no gun for the juniors.

This mother was so commited to getting a great photo that she ran across the field and jumped over that railing. I am sure she got some great shots. :-) 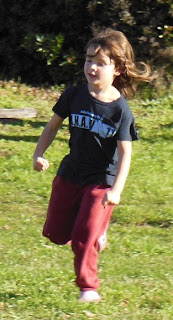 Ruth looks so small compared to the others just ahead of her. 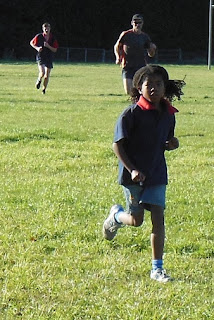 I did not realize that the youngest children were doing a shorter course and so we saw Hannah heading in and could not understand where Ruth was. Hannah came in about 6th of the girls in her age group (the 5 year olds) 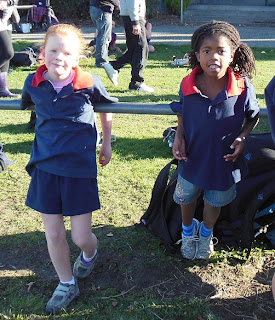 Thankfully I did see where Ruth's group were coming in (from the opposite side) and she was also about 6th girl. Their finish was close to the seniors finish and it was amazing to see how quickly a lot of the older guys did their course. Ruth did the course in about 12 minutes - so it would be interesting to know how far it was.
Left: Ruth with Meg - who did Ballet with Ruth last year.
Thanks Kerry for lending Ruth a school shirt and thanks to the school for letting our girls participate. 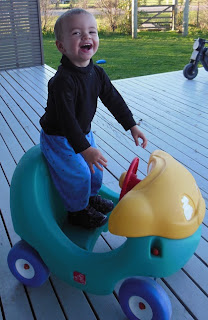 For those who were wondering - Rachel did not run this year. She is keen on trying the sprints at the athletics later in the year - but long distance is not her thing (and I don't blame her). I was thankful for her help watching Hezekiah as I had Asher in my arms and was trying to get some photos too. They were all treated to fancy ice creams afterwards - which was a great way to end the outing.
We managed to get to the toy library this morning and although I could have gotten a similar car to the one he had - I decided to get something different. Now I think the one with the roof is perhaps a good idea. :-) Little monkey.