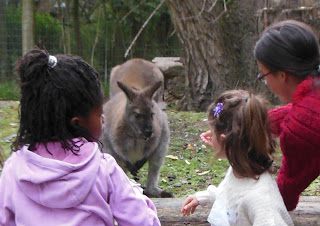 Every year the Correspondence school organizes a "get together" for the teachers to meet the children in person. As Hannah is still part of correspondence school we joined them at Willowbank today.She also has two new teachers this year - so it was nice to meet them face to face and get a bit of time to talk.
It was quite busy when we first arrived - getting Asher settled in the sling and Hezekiah in the pram. I did not get any photos at the eels (they are close to the entrance) as it was just too busy. 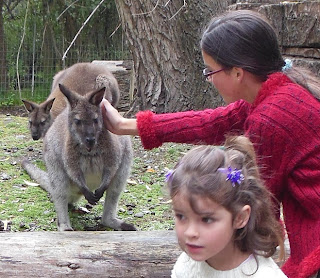 A highlight for our family every time are the wonderfully friendly wallabies. They know the visitors have food (bought at the entrance specifically for the animals and birds so they are not fed junk) and they willing allow people to pat them in exchange for some treats.
The signs clearly say "stay on the path" so that the animals have the choice of coming to you. I was quite disappointed to see the total disrespect to "instructions" by a few of the other children in the group. I even told the children that they should come back onto the path - that they were scaring the animals - but they just ignored me (and the mothers - if they had not noticed the signs - were not bothered to do anything about it when they heard what the rules were). 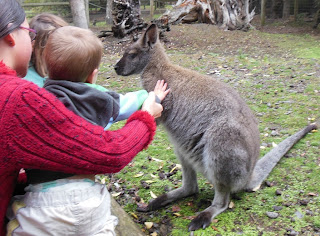 At this point Hezekiah decided he wanted to get out of the pram. He had fallen asleep on the way into town and so had been happily sitting in the pram with a blanket up until this point. Rachel just holding his arm gently to make sure he did not try and touch the wallabies eyes.
I am glad we got here before the group and could enjoy this close encounter.
It rained on and off through the first hour and so not too many photos were taken and quite a bit was rushed. 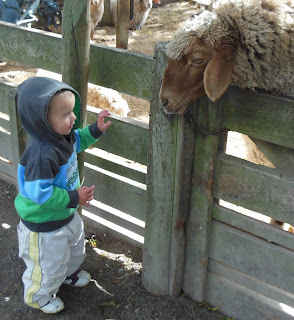 When we got to the farm animals it was nice and dry though and Hezekiah just loved getting nice and close to the animals. This sheep obviously loves the pellets it knows children have. Hezekiah was more than happy to touch them and feed them. He really does love animals so much and had a wonderful time. 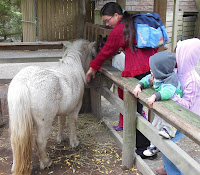 No surprise with Rachel enjoying the pony - and thrilled that it came out of it's stable so she could give it a pat. It was a bit of a whirlwind visit as I tried to keep up with them all.

They enjoyed seeing these pigs - such sweet little piglets. 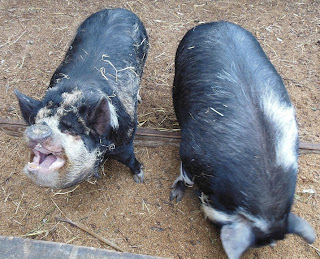 They were not very impressed with these two though. They thought they were quite ugly. And boy were they greedy. They LOVE the pellets and fight with each other to get them. I actually wonder if the like / dislike has more to do with the attitude than just the looks..... 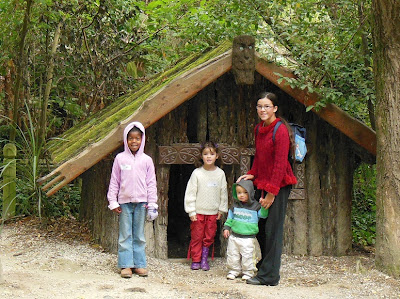 A quick pose at the Maori section. Hannah just wanted to get to see the Kiwi. She knew that they were in a "dark house" and was talking a lot about how the Kiwi was "tricked" to thinking that it was night time during the day and then when it's night time all the lights go on so they think it's day time and sleep. We got to see two of the Kiwi right up close to the pathway. Rachel said she could have reached out and touched it as it was so close. She had noticed the sign though that said you were not to touch them - so she didn't. I am thankful my children understand the importance of keeping rules. They are put in place for very good reason.

It was nice to see the Kea too. 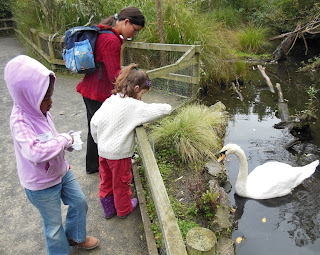 And Hannah really loves seeing the swans. There were black ones with the eels at the entrance but white ones here which she was thrilled about.
We also spotted an injured Heron just after this and Hannah made a point of asking the keepers if they knew about it. They told her that the bird had been injured in the wild and so had been brought here to heal. 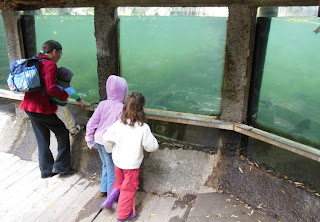 Hannah was pleased to spot these eels in this tank and made a point of bringing her teacher to show her after lunch. I had ordered Subway sandwiches on-line the day before and so we could just pick up the fresh sandwiches on our way in this morning. It made for a lovely fresh lunch and we enjoyed chatting to the teachers and other families before a quick visit to the eels and then we were off for the rest of our errands for the day. 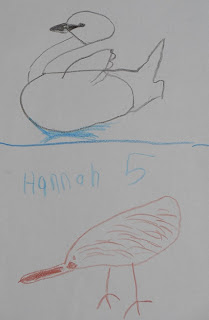 After lunch someone had bought some eel food and so the children had turns feeding the eels. This was a highlight for Hannah and she drew a picture for her teachers about the eels coming out of the water for food. The other highlights for her were the Kiwi and the Swans. So she drew pictures of them to send to her teacher as well. I have a nice book showing how to use basic shapes to create different pictures and so I helped Hannah to do this swan. She had been quite frustrated before that her picture did not "look right" - so this was a nice way for her to feel like she had managed to draw it. She was still a bit frustrated with her attempts but I was thrilled and told her she had done a great job. The more she practices the better she will get. My children don't tend to do much drawing so it was nice to get the books out and give them some tips on how to get started. It's been fun to see them all trying and enjoying doing it together.
Posted by Buckland at 8:00 PM