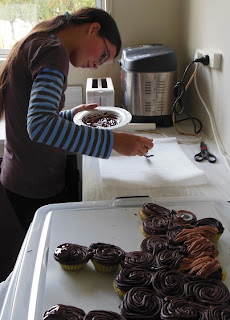 Rachel's birthday celebrations started on Friday 5th as she got started on her cupcake birthday cake. No surprise that she chose a horse for her theme. :-) She made the cupcakes and the icing and then I helped her with the actual icing of the horse (so all negative comments come to me). I always tend to compare our results with the idea we saw and this time I was disappointed it did not look as nice as the one I saw on-line. Our shape was just not as good (I think our cupcakes where a bit too big) and I did not do the best job of the icing. Rachel was thrilled though and that's what counts. 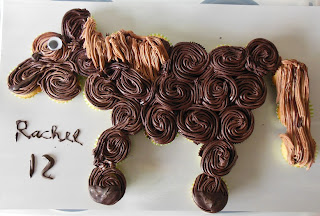 I was also pleased with the icing Rachel made as for the first time I was able to use some of the icing tips the way they are supposed to work (like the grass tip I used for the mane and tail). So hopefully there will just be more and more improvement from here.

Both families of the girls that Rachel wanted to invite to her party live around 30 minutes from us (in opposite directions). So I suggested they come here after school today and spend the night. Everyone enjoyed some apple for the first part of afternoon tea so that we could wait for Brendon to get home for the cake. 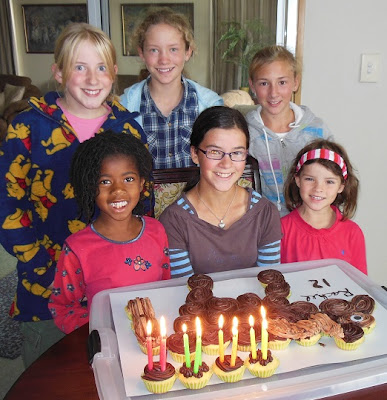 Candles all lit and ready. At what age to you stop putting all the candles out I wonder? 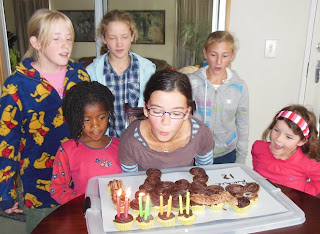 Although Hezekiah was not in the photo - he enjoyed the singing and the candles just as much as you can see Hannah did in this photo.

For dinner everyone created their own pizza. These were the left over pieces after all the tummies were full. I was trying to have a lot of options but did not really have to worry. The favourite with them all is pineapple, bacon and salami. My girls did help me feel like my efforts were not waisted and so they experimented with some mushroom, different coloured capsicum and olives. Although granted the olives where mainly for Ruth, Hezekiah and myself. 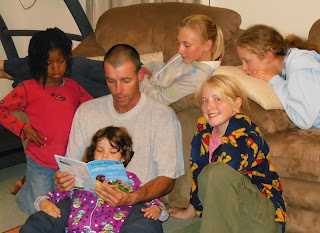 Hannah was joined by the others for her Bible story with Dad before the little ones headed off to bed. The older girls then stayed up and watched Chitty Chitty Bang Bang. Louisa had not watched it before and the others were happy to watch it again. It's a long movie - so they had to finish watching the rest in the morning.

Louisa was picked up just after 9am and as I knew she was not a singer - once she had left I asked the others if they wanted to use the Sing Star. They all had so much fun. 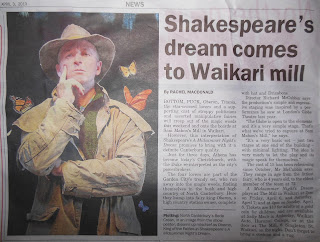 On Saturday evening Rachel and I headed off to watch the Shakespeare play. I had not planned well enough and did not have expressed milk ready as a back up for Brendon. After Asher fed I thought I would be able to express but could not get any. So I decided to just take her with. It worked out perfectly as she fell asleep in the sling / wrap soon after I put her in when we got there and she slept the whole way through.
This was a lovely way to end Rachel's birthday as we both enjoy A Mid Summer Night's Dream and both thoroughly enjoyed the performance. We chatted non stop on the way home.
Thank you Lord for Rachel and the blessing she is to me and the family.
Posted by Buckland at 11:00 PM