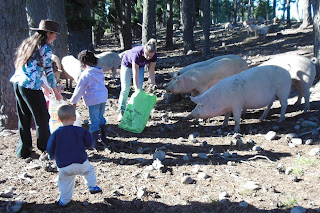 Saturday 23rd: Brendon had to work this morning but as a nice change for us Holly had asked if we wanted to come and collect some pine cones before the rainy Autumn weather makes them all wet. 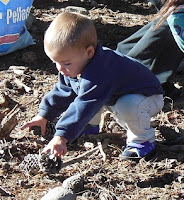 Hezekiah helped a little bit and then wanted to head back to the car. He picked up a cold from another little one on Thursday night and so I don't think he is feeling all that great. 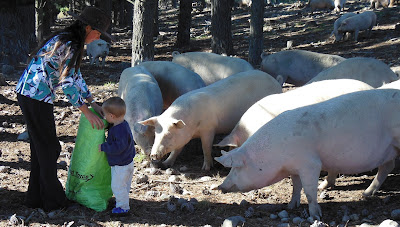 Thankfully he got over it really quickly - so I know his immune system is improving as we get more glyconutrients into him. It's so much easier with the older girls as they can just swallow tablets.
He did have a fun time being around such big pigs though and tried to get to touch them. 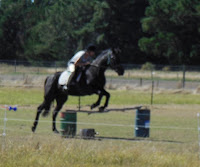 The Hawarden Derby was unfortunately cancelled for tomorrow as they did not have enough interest. Christine has said that she would be happy to take her to a ODE (One Day Event) outside Culverden next month though - so that helped ease the disappointment. At least all her jumping practice won't go to waste. She did a few more big jumps today and although I was taking it from the house (so it was rather far away and did not get focused properly) it was great to get this shot of her. She looks so comfortable (and what a big jump for someone who has only been riding for a year). 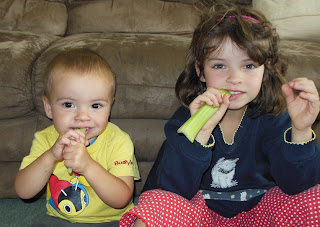 Sunday 24th: Hannah has always loved raw celery and now she has someone in the family to join her. :-) 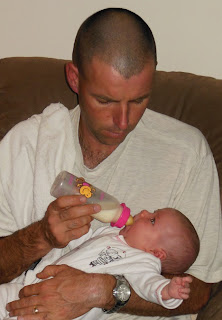 I am hoping to be able to take Rachel to watch a Shakespeare play that is being put on next weekend - on her birthday. So in "preparation" we wanted to see if Asher would take a bottle of expressed milk. She managed but was not that happy about it. 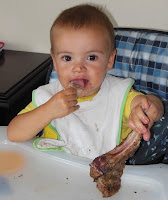 Monday 25th: Chops on the BBQ yesterday and so today Hezekiah had a left over one as part of his lunch. It seems to be working well now to just give him the whole chop (rather than small pieces that he just shovels down). This boy really loves his meat. 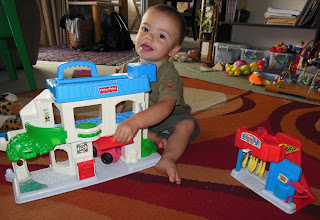 What he also loves is this toy from the toy library. He will sit for ages pushing the cars through the "garage" and the "car wash". 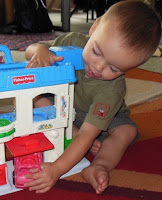 And I always smile when I see that little tongue sticking out as he concentrates so hard. 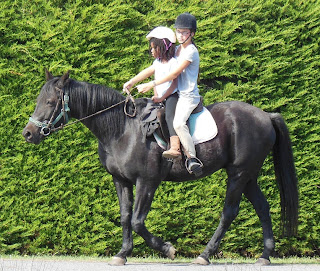 Tuesday 26th: Louisa came to our place after school today so that she could go to ballet with us. Rachel decided to ride up with Auto so that they could walk back with her. The idea was to allow Louisa to get a ride on the way back but they were a little late and so gave her a ride once they had all her things at the house. 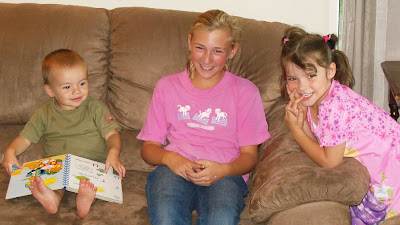 Louisa's mum had a rather busy evening and so I suggested Louisa just stay over for the night and head up to school in the morning from our place. Hannah and Hezekiah enjoy having another "big sister" to play with. 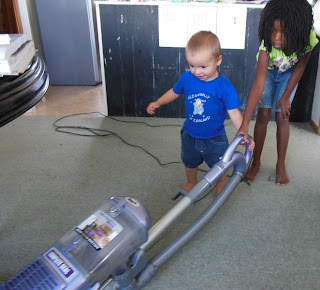 Thursday 28th: Today Hezekiah decided that he wanted to help with the vacuum cleaner. It's a bit heavy for him to do on his own but he was happy to just be able to help.
I had to smile today when I saw Hezekiah put his boots into Dad's boots. 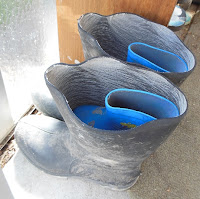 My boy - if you walk in the footsteps of your father you will make me very proud.
Posted by Buckland at 10:00 PM