Sunday 17th: Rachel had a lovely time riding with both Christine and Mark this evening. 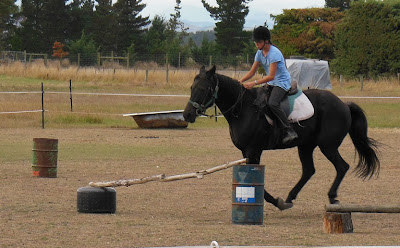 The Hawarden Derby that she participated in last year is planned for next Sunday so she is getting as much jumping practice in as she is allowed (you can't jump the horse too much otherwise they get sore - especially Auto who is quite old). She is registered for the 45 cm group. I was surprised to hear that she actually got the other barrel brought over and did that jump at it's full hight too. Rachel really does love riding and we are so thankful for the opportunity she gets to ride. 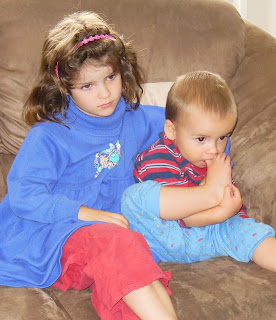 She has learnt a lot of responsibility over the last year too though as she needs to muck out every day and also care for Auto. It's been a great blessing.
Tuesday 19th: What a little monkey with his toe in his mouth. And if anyone was wondering - yes he is STILL teething. It's been almost 2 months with these 4 eye teeth.
We will all be very pleased when they are finally all out. 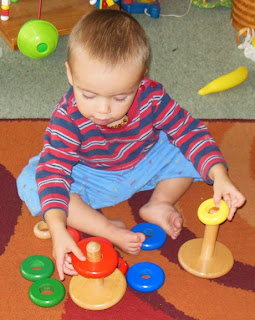 I loved watching Hezekiah play with these toys. We ended up with two identical ones but it was so much fun watching him play with both at the same time.

On Tuesday's I normally drop Hezekiah off at a friend just before 4 so that I can head off to get Ruth to her ballet lesson at 4:30 and pick Hannah up (who finishes at 3:30). Today Hannah's lift could not get her there (as the girl was ill) and so I had to leave at 3 instead. It was nice to be able to watch Hannah's lesson although with Asher in arms I did not get as many photos as I would have liked. 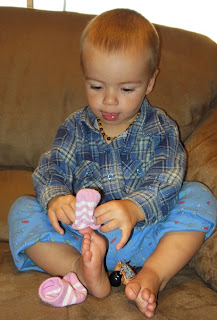 Wednesday 20th: There are some chilly mornings now but it often warms up a bit as the day goes on. Asher's socks came off once it was warmer and Hezekiah had some fun pretending that he was going to put them on. 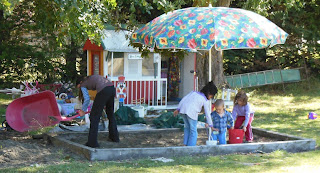 This afternoon the girls headed outside to work on clearing out their sandpit.

It is quite low and so instead of just putting new sand on top we decided to clear it out and put a whole new batch of sand in. Hezekiah tried to help a bit too. Good job kids. 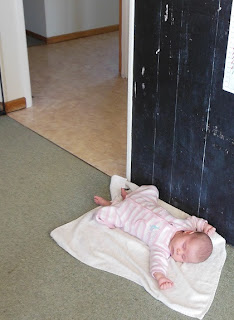 Thursday 21st: We do find it so funny that Asher will sometimes struggle to get to sleep when we put her down for a nap during the day - but then at other times when she should be awake - she is so tired she just falls asleep where ever she is. I had put her here at lunch time as we were getting everyone sorted - nicely to the side so she would not get tripped over - and off to sleep she went. 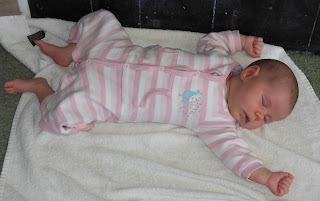 Such a sweety. Sleeping so peacefully. 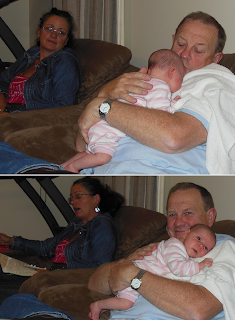 I got these lovely photos of Asher with Steve (and Josie) after Bible Study this evening. Josie had been holding Asher earlier when I was busy with Hezekiah. I love the smile on her face in the top photo and then Steve's smile in the 2nd one (while Josie discusses something with Brendon).

Friday 22nd: I tried to get some photos of Asher's lovely smiles today but they just come out looking rather strange. It did not help that I was trying to make her smile myself and holding the camera myself off to the side. It really is precious how their whole faces light up when they smile though. 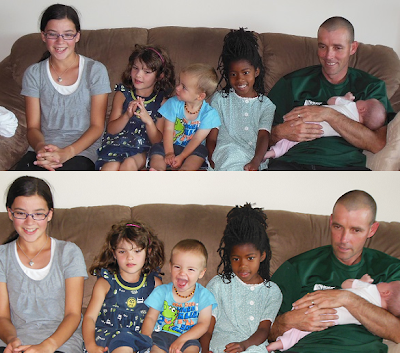 Today was Grandpa's birthday. So instead of having a Skype call on Wednesday we called today. Everyone sang happy birthday and it was so cute watching Hezekiah's enjoyment of it. The first photo had everyone but him smiling and then in the next he was laughing at something. Special memories though and I am thankful the girls get to chat to Brendon's parents regularly. I have also realized though that Hezekiah has also gotten to know them really well. When other people call on Skype he is a bit shy at first. The technology is such a blessing.
Posted by Buckland at 10:00 PM