Of slides, wood and vegetables 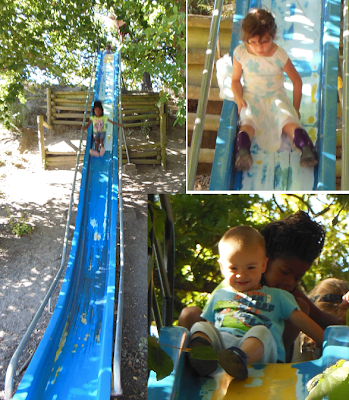 Tuesday 5th: My first day to do the ballet run today. I had hoped to get there in time to watch a bit of Hannah's class but we only got there once she was finished. So we all headed over to the play area as we waited fore Ruth's class to start. I got these photos on the huge slide and they got to play a little bit more before we headed back for Ruth's lesson and for Asher to feed. I eventually had to strap Hezekiah into his car seat so that I could care for Asher's needs and know that he was safe. I coped with the day but found it was really hard on Hezekiah. A friend has agreed to rather have Hezekiah stay with her each week so that Brendon can just pick him up after work. Rather than spending an hour in the car and at least half an hour waiting around for a ballet lesson to finish, he gets to visit with a friend from 4pm until Brendon is done with work (any time from 4 to at the latest 5). A much nicer arrangement for us all. 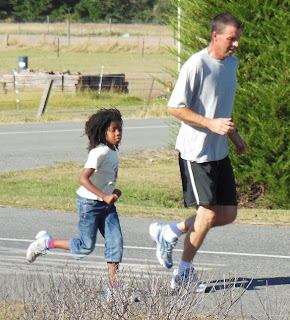 Thursday 7th: Ruth would like to get back to running with Dad - so they have gotten out a few times. Cross country is coming up in May - so she has a little while to practice. It's great having a running coach as a Dad. He is helping her to get that left arm working a bit more and also helping her to regulate her pace so that she does not get tired as quickly.

It's great for them to spend the time together and we love laughing at how Brendon looks exhausted when they get back (it's looks only though as he is dripping with sweat) and Ruth looks totally fine (although she looks fine she has had a real good work out and is rather tired once they are done). She has already started talking about them lengthening the route. Hopefully they can keep it up as I know they will both enjoy it so much.

Finally got a photo of the sling that a friend lent me. When Sandy arrived for a visit once with her in there she said "I see you are wearing her". :-) It's wonderfully comfortable for both of us and has helped Asher when she is struggling with her tummy and wants to be upright.
Again we laughed at Hannah as she immediately asked Dad to take a photo of her. Posing sideways - just like Mum.

Friday 8th: Brendon hired a wood splitter for this afternoon to use after work. I managed to get 45 minutes work in with him after dinner (with Asher in the sling) and then Rachel took over once the others had gone to bed. 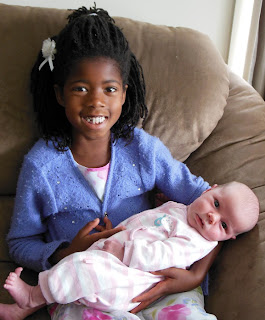 It ended up being just less than 2 hours work but with starting a little later Rachel and Brendon only got finished once it was dark. I forgot to take a photo on Saturday of the section we did - so I took a photo on the Sunday once it had been covered. We seem to keep getting higher as we pack - so the last section is on the left hand side - to where you see it get a little lower. We are pretty sure now that we should have enough wood for winter. 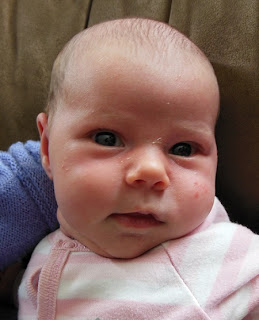 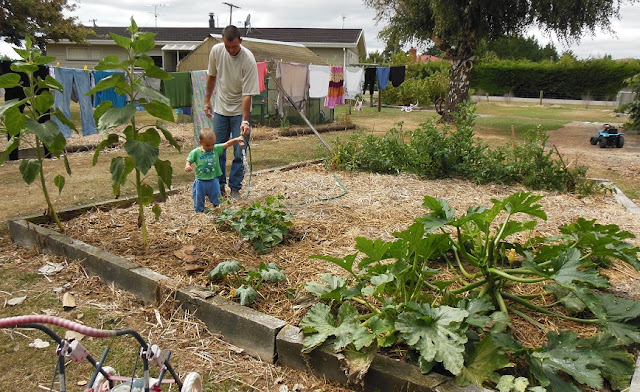 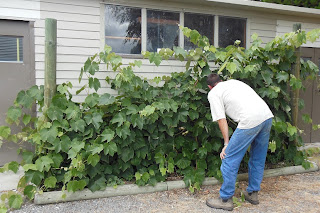 Unfortunately we did not have wonderful success with our seeds this year, so we only have tomatoes, zuchini and cucumber. It was nice to finally get success with cucumber though (although the skin is a bit prickly).
The grape vine is looking really nice this year again (a lot more controlled as last year Feb it grew wild while we were away). There are loads of grapes growing but we don't get to see many ripe as the children pick them as soon as they turn red. :-)
Posted by Buckland at 10:00 PM