Monday 11 March: The girls decided to use the old safety net from the trampoline to "clean up" the garden today. The idea was to load everything up and pull it all back to where all the toys should be. The soon realized that the path they had chosen was a bit too hard and went the other way around.

Tuesday 12 March: Rachel was thrilled to get another lesson on Jo today. Previously she had only walked and halted.  Today she not only trotted but even cantered and jumped. She was just beaming when she got back. Jo is a very sensitive horse and so she can only ride him when Christine is there "giving a lesson" and helping her to learn how to ride him properly. So this was a very special time for her. When Brendon told her how much Christine charges for lessons she realized how much her daily "muching out" is worth. She really is working for her riding time and today made it so worth while for her.

Above is a video of her cantering. She learnt so much from Christine today. Christine specifically wanted Rachel to canter on Jo as he has such a lovely canter. Christine is hoping that this time on Jo cantering (as he has such a great canter) will help Rachel for when she canters Auto (who does not have a very smooth canter but will be helped by Rachel doing the right thing).
When I showed Rachel the video she mentioned that she lost her balance a bit at the end because Jo stumbled. She did not fall off though - just lost the beautiful rhythm they had for a couple of seconds. It is really lovely watching Rachel ride - she looks so graceful.

Above: Brendon getting Asher to sleep this evening. Right: The reason I took the photo above - to put it in with my "then and now" photos of Brendon with Rachel (far left) and Hezekiah (middle) in this wonderfully comfortable position. 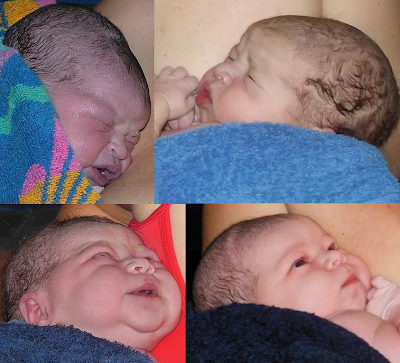 The other "then and now" photos I did was birth photos. Unfortunately I don't have nice photos of Rachel (no digital camera at that time) so had to keep the comparison to Hannah (top left), Hezekiah (top right) and Asher (bottom left just minutes after she was born and bottom right at 25 minutes). 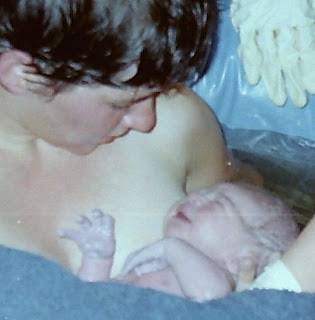 It doesn't feel right to leave the others out (birth is such a wonderful celebration of life) so here is a photo of Rachel just minutes old. 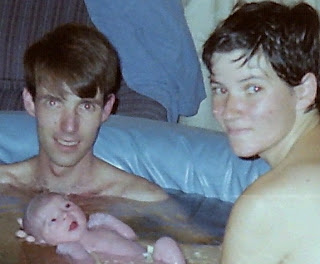 And another of her a while later. Her hands and feet actually went purple (you can see they were pink right after the birth and they pinked up again a bit later).
And a look at what Brendon and I looked like almost 12 years ago. :-) 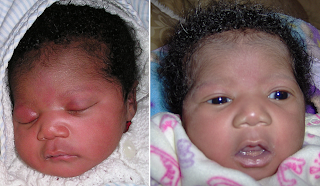 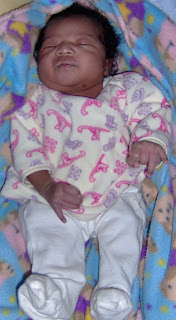 And so it was time for me to hunt for Ruth's first photos. She is the one with the best baby book of her first year and all the photos are in there - but I did not have the digital copies on my computer up till now. It's nice to have them backed up now.
And you may be thinking "that looks nothing like her" as I was thinking the same thing. And then I saw this photo (to the right) with the birth mark on her chin. Even though we did not get to spend the first 4 weeks with her its wonderful that we have photos from that time.

And then talking about older babies - here is a comparison again between Hannah (10 days), Hezekiah (26 days) and Asher (10 days). So Brendon is right - she does look different to the others. Mainly the shape of the head I think. It will be interesting to compare them again in the months ahead.
Posted by Buckland at 10:00 PM

Labels: Horses, Then and Now