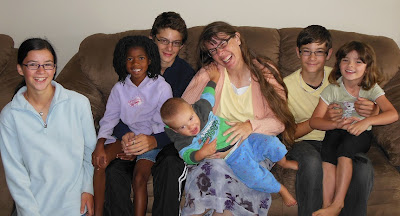 It was lovely to have a catch up with the Campbells (these children are all growing up so quickly) and I remembered just before they left on Friday morning (22nd) to ask Michelle to get a new family photo for us.
We only realized after they left that Hezekiah has all four eye teeth pushing through at the same time. So no wonder we did not have the normal happy face for the photos. 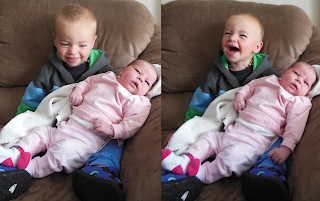 He will still smile for his baby sister though and I got these lovely photos later that day. You can see how much cooler it was today. She was just in a vest last night but is bundled up today (and these photos were taken at midday).

Saturday 23 Feb. Asher enjoying a bath with me. I just love how new born babies naturally just turn their heads to get their ears (and sometimes eyes) into the water. They did spend 9 months in water - so it must be very familiar to listen to everything in that context again. 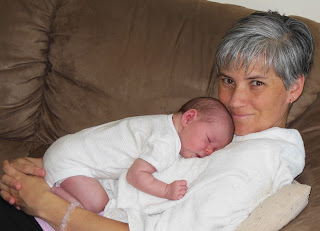 Asher has made it clear that she was NOT interested in leaving her mother just yet - and so has spent much time sleeping on my like this in this first week. There was one day where Brendon was holding her and she was niggling and just not settling - despite him trying this position and any other that might work. As soon as I took her from him she quietened down and then fell asleep like this. So we are just being extra indulgent this week and giving her that extra time close to her mothers heart beat. She has been listening to it for 9 month and was obviously not ready to be parted from me just yet. It has also allowed me (or forced me) to really rest through this week too. 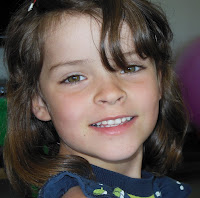 And talking about her first week - Sandy weighed her yesterday and she was 3,87kg. So although a drop in weight is even "normal" for the first week - she has already put on 100g (as well as grown 1cm).
I had to laugh at Hannah wanting Brendon to take this photo today. She stood sideways (just like I did through the pregnancy to show my "bump"). She must think this is the way you pose for a photo. :-) 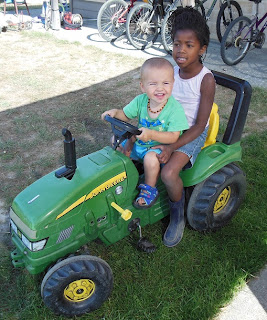 Monday 25 Feb: Brendon saw the homeopath again today to get a new remedy to try and stop the migraines from happening again. When he saw her ages ago for the first time she picked a perfect remedy at that stage as he did not have any headaches for so many months (and she got rid of his heart burn too). So things have obviously changed since then and a different remedy is needed.
I did not want to have a long afternoon / evening on my own (with him going straight to the appointment after work) so we organized to visit the Fawcettes. Brendon dropped us off on his way and we had a lovely visit with them. Hezekiah just loved this tractor as well as the big go-cart (although I did not get a photo - it was so sweet looking at his happy face sitting playing with the steering wheel). 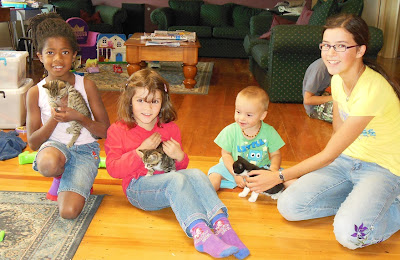 They always have so many animals for the children to enjoy and they had kittens again (which Hezekiah loved just as much as the girls).
Paulette had graciously invited us to have tea with them so that we did not have to "eat on the road" as we travelled home. It was quite a site watching her dish up for 16 people (they have 7 children and there was an extra visitor with one of the boys).
Rachel enjoyed watching two new horses being unloaded (their owners are immigrating). 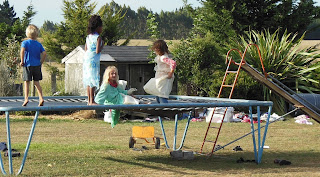 Ruth and Hannah had great fun with all the dress up clothes. You can spot the box that had been unpacked behind them - clothes all over the floor. 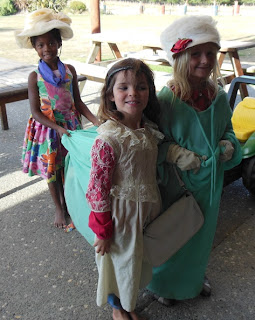 All dressed up for a wedding. Doesn't Ruth look so good with that hat on. :-) 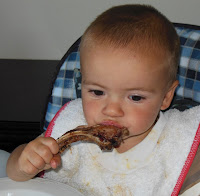 Wednesday 27 Feb: Enjoyed BBQ Pork Chops this evening and decided that perhaps instead of cutting Hezekiah's up we would just give him the whole thing. He always loves chewing on the bones and gets all the extra bit of meat off them - and this worked really well. It actually managed to slow him down a bit (as he normally just shovels the pieces of meat in as he loves meat so much).
Posted by Buckland at 10:00 PM