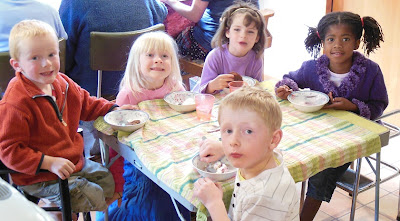 Tuesday 1st January 2013. I wonder how many people will be writing 2012 and having to fix it. :-) We had a lovely start to the year by heading up to the Spencer family for dinner this evening. The children had a wonderful time playing and we enjoyed some lovely Christian fellowship. It was great to catch up with Neil and Marjorie Spencer as it has been so many months since we saw them last. 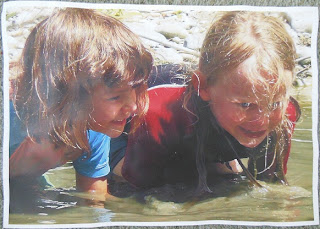 Wed 2nd: Ruth was invited to Danielle's 8th Birthday party and although I went down with all the children, Hezekiah and I headed back soon after lunch as he had not slept and desperately needed home and bed. He had a good nap and I have realized that having just one nap after lunch is what his new schedule is going to be. Perhaps more of an adjustment for me to get used to. :-)
The girls had a wonderful time and we only picked them up much later. They had an exciting swim in the river - with Ruth going into an area that was too deep for her and Ruth Love (Danielle's mother) getting a bit of a fright - quickly getting someone to pull her to the side. Ruth told me she was not stressed though. I think everyone else got rather stressed - seeing her just managing to keep her mouth above the water. In some ways Ruth's love of the water is a problem at the moment as her ability is just not quite what she expects it is. The girls told me about the lovely purple cake (I saw the lovely purple themed room and table but did not get a photo - too busy with Hezekiah). Hannah was given a copy of this lovely photo of her and Danielle though. It really captures the fun they had. 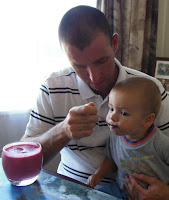 Thursday 3rd: 36 weeks today - so down to the doctors rooms to get my bloods done this morning. It was lovely to have a friend pop over to watch the children so I could just get out and not worry about loading everyone up.
Afternoon tea was a berry milkshake again. Last time I had used 70 black currants and this time I put in 150 (I am just aware that they are a bit more bitter and only Hezekiah likes eating them as is). But with the other mixed frozen berries it was enjoyed by all. Hezekiah being awake to try it this time and loving it. :-) 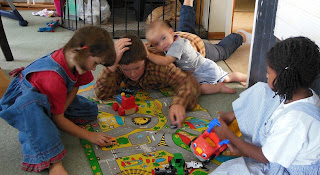 During bible study this evening Luke played with the younger children and their cars. Hezekiah just took to him so quickly and loved climbing all over him or even just giving him a nice big hug. It was so sweet. 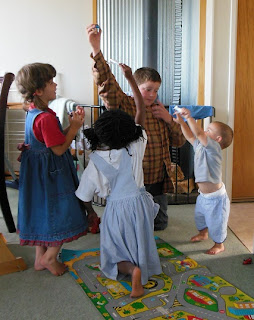 Learning to "fly" the aeroplanes. 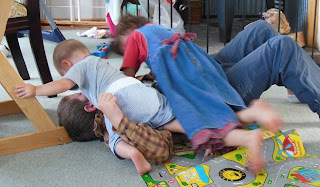 And Hannah getting in on the rough and tumble action.
Friday 4th: The girls went picking again today and this time I said they could pick as many red currants as they wanted to. So they came back with a good supply of black currants and this 2 leter container almost full with red currants. 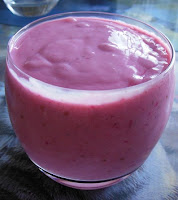 So today's request was a red currant only milkshake and it got a thumbs up from everyone (we used half of those red currants - so it was loaded). 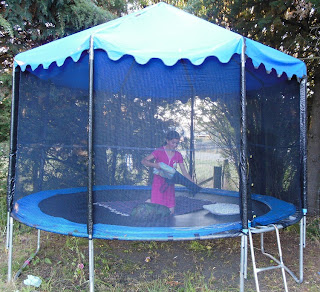 Rachel has been asking about sleeping on the tramp since New Years Eve. We had suggested that night might not be the best if there was a lot of traffic after midnight or fireworks that would wake her. Then there were windy or wet nights - so finally tonight was the night. Ruth had unfortunately lost her "staying up late" privileges for today - so she could not join her. I suggested a mat and the picnic blanket for underneath her (as I know it get's cold in the early hours of the morning) although if it was up to Brendon and Rachel she would have just had her sleeping bag and pillow.

She was so excited. She got herself all set up just after 8:30 but I know she was still moving around after 9. It only get's dark closer to 10 - so who knows what time she finally fell asleep. At least she was relaxed and enjoying the experience.
She woke at some point in the early morning to come and get a jersey and then got back to sleep. The birds then woke her at 5 am and she came in (I heard her and went back to sleep). So she had a few extra early morning reading hours to enjoy as well. 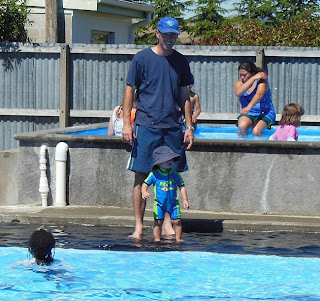 Saturday 5th: It was so hot today we headed down to the pool before 4pm (we normally only go closer to 5pm or later). We made sure everyone had shirts to stay some what covered and Hezekiah got to try out his new togs (thanks to Ruth Love for passing these on). The men with their short hair made sure they had hats on too. :-) I quickly got this photo and then we were all in the pool - so very thankful to finally be able to cool off. Brendon was also very thankful he got the grass cut really early this morning. Once that heat came it was not practical to get anything done outside. It was no help being outside at all as there was not a breath of wind. Even at 10pm it was still over 26 inside. It only really cooled off after 1am (when I finally could get some sleep). 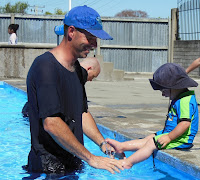 When Hezekiah was eventually done with swimming he enjoyed sitting on the side of the pool splashing for a while. Ruth did a lot of under water swimming today and found that when she does breaststroke arms she can move forward really well (much better than doggy paddle with her arms). So she really got a load of swimming in today. I need to look at getting her a nose plug though as that's what bothers her the most - water up her nose. 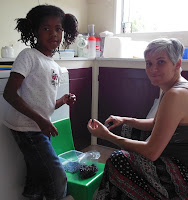 Sunday 6th: Thankful for a bit of a cooler day today with at least some wind. The girls did more picking and so Ruth and I finally did some team work and got all the hard bits cut off the black currants so that we could get them in the freezer.

We had used up their previous batch of red currants in another milkshake but they picked another load full today. So we got a nice stock ready for the freezer. They assure me there are even more red currants to be picked.
Posted by Buckland at 10:00 PM