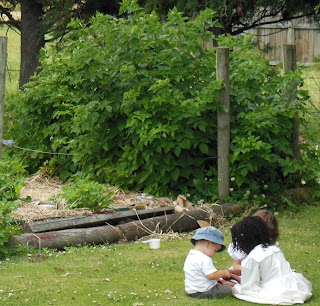 Saturday 29: Ruth is our regular berry picker. Those are the wonderful raspberry bushes behind them. She collects the berries in a little container and then they sit and share them out. They collect raspberries, strawberries and red currents every day to enjoy. I just loved watching Hezekiah as he sat down and scooted himself closer so that he could get his share.
Brendon worked this morning but when he got home at 11am he went straight to bed because of terrible nausea. He had even taken some nausea tablets at the office when it started but they had not helped at all. He spent the whole day in bed - sleeping most of the time (other than when I tried unsuccessfully to get him to try and eat or drink something). 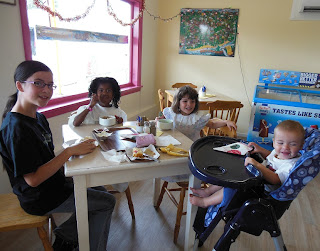 It was going to be Ruth and I out for afternoon tea today - but I asked her if we could rather all go. She can then go next week with Dad. It was nice to let Brendon have some total peace and quiet for a bit and also nice for me to have something different to do with all the children. Hannah loved looking around at all the Christmas decorations - noticing and pointing out every one. :-) 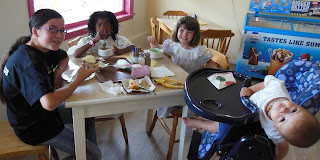 Brendon finally felt better at around 8:45pm (after over 9 1/2 hours sleep), spent almost an hour up managing to eat a little bit and then we headed to bed. He slept well through the night and when he woke at 4am he said he felt fine. He was off to work just after 5am. It's been absolutely ages since Brendon had to work on a Sunday - but with all the business of this holiday period his help was needed today.

It was great to have him home just after 10 though - as we had berry milkshakes on the go which he could share with us. The girls had picked all these black currents in the morning and as Hezekiah is the only one who eats them straight from the bush - we had to find something else to do with them. I used 70 of them (Hannah wanted to help me - so she counted them as I cut the little hard bits off) as well as frozen strawberries, blackberries and raspberries. The milkshake was enjoyed by all (except Hezekiah who was in bed for his morning nap). 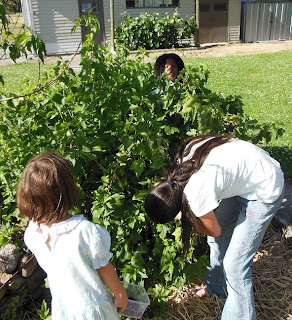 The black current bushes are really overloaded with berries - so I think this is going to be a regular "treat". Brendon think Patches (Ruth's cat) might be the main reason we actually have so many because the birds are staying away. The red current bushes don't look as loaded because the girls pick and eat those every day.
If anyone has any easy ideas for what we can do with the black currents please let us know.
The vine at the garage (seen behind Ruth's head) is also doing well and we can already see tiny bunches of grapes starting to form. 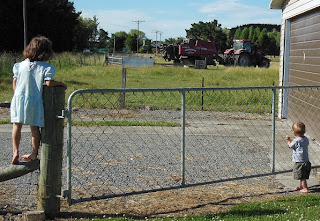 While we were outside this tractor arrived next door. Hezekiah and Hannah were just so pleased to watch it. At least Hannah shares a bit of Hezekiah's enjoyment for different vehicles. :-) 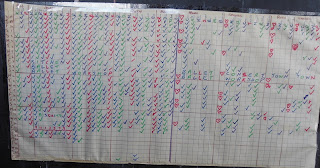 Our "to do list" ended today - although it has not been used much for the last week or more. It really has been a holiday for everyone but Brendon.
One change that worked nicely on this one was that we separated the "daily" items from the sort of "extra" items. This way everyone knew what section should ideally have a tick on every block. 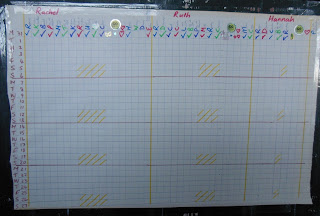 Monday 31: Today we started our new list. A friend of mine had seen our list and decided to start something similar with her own children. When we visited her a couple of weeks ago I then got some ideas from her. She had a space for a sticker at the end of each day - as motivation for getting all the daily chores done. So we have again adjusted our list (which is so nice about this way of doing it) and had a wonderful start to the month. The girls were all really motivated to get their jobs done (and without even getting a reminder from me). Brendon has suggested that there be some extra motivation - so at the end of each week stickers will be checked and for everyone who has a sticker for every day in the week - they will get a chocolate. 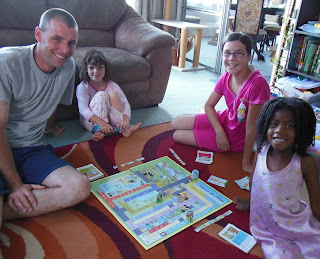 We don't generally stay up on New Year's Eve as Brendon is normally working the next day (as he is again this year) and will be up at 4am. But we did have a bit of a "treat" with the girls and we played our new bible game once Hezekiah was in bed. So a bit of a later night for them and a great time together. We played the card only game the previous night and it was nice to play the board game today. I can see lots of fun times together with this.
And that's our 2012 done.