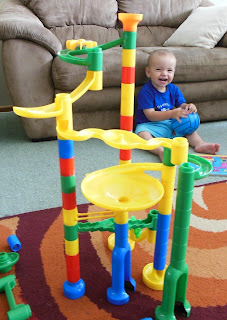 Boxing day saw Brendon back at work. Thankfully it was a much cooler day but it ended up raining so much that it was from one extreme to the next for Brendon. We had some fun building another marble run in the morning and then once Hezekiah was in bed I took some "time out" and got working on my blog. It was lovely to have it almost totally up to date by the time Brendon got home and it helped the day go a bit faster for me too. I do miss him more on days like this when I know so many others are having a holiday.
Hezekiah had been standing spinning the one wheel (the orange wheel on the green slide close to the top) but as soon as I came with the camera to get a photo he headed over to where we had the family photo taken yesterday. No matter how much I asked if he would come and spin it again for me - he just sat. Thinking it was all a big game. Just look at that face. :-) 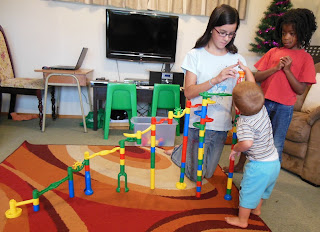 27th: Thursday was also a cooler day although it only rained a little in the morning. It keep the children indoors in the morning though and so another long marble run was created and enjoyed.

Hezekiah really likes all the new instruments. I bought a few sets of castanets but decided to get this handle mounted castanet too as I thought it might be easier for him.

He just loves it.
He also really enjoys the triangle. I just love watching him and seeing how much he learns. He very quickly discovered that to get the best sound - he must hold the plastic handle for the triangle (not the triangle itself) and also hold the end of the stick that has the plastic. 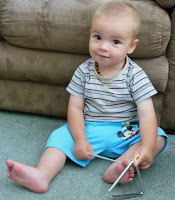 And please notice where he is sitting again. I got the castanet photo but he heard the click and saw the camera - so headed over to the "photo chair" again.

Rachel was thrilled to see Jo arrive this afternoon. The plan was that he arrive on Sunday originally - and that was why Rachel had worked so hard on Saturday to get all the mucking out done. By Saturday evening she knew he was not coming the next day and the hope was some time this week. 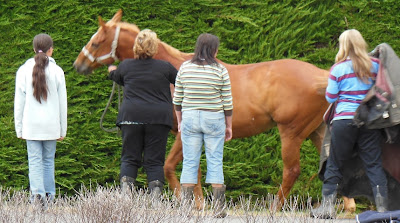 There is a long story behind this horse - but basically he is an amazing show quality thoroughbred horse - but in need of a good home. So Christine with her soft heart said "I'll take him". She bought him at a sixth of the price of what the previous owners paid for him - so I suppose in some ways it was a real bargain too. That takes her horses up to 4 now. Before Christine had agreed to take him though - she had specifically asked Rachel if she would ride him regularly and look after him (including mucking out which she is already used to). 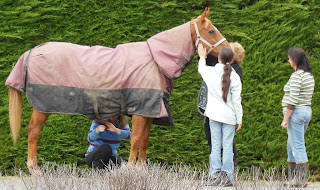 So Rachel was especially pleased to get to say hi and give him a pat.
They took his travelling blanket off and put this thicker one on as there looked to be a storm coming. At least Rachel got to see how it worked (it's even an expensive blanket).
Rachel was riding Auto when we got back from SA but after this last winter he is just too old for jumping and doing anything strenuous. So Rachel is really looking forward to when she can start riding Jo and especially getting back to jumping.
We had an interesting afternoon / evening watching Chicken throw a bit of a tantrum with the "new horse". Hopefully she will settle down quickly and accept him. 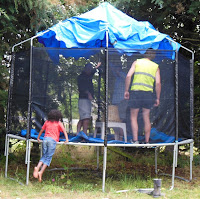 It was too wet yesterday to get the canopy up on the tramp - so the guys helped Brendon after work today. So much easier with 3 tall men. 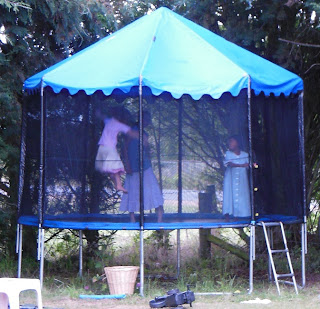 Friday 28th: We still needed to tape the canopy to the poles (the original velcro had all been ripped when it was damaged almost 2 years ago) but it was too wet when they put it up yesterday. We got working on it once Brendon was home today and we even got the safety mats properly secured over the springs for the first time (before they were just loosely attached and they would always move around). The girls were SO thrilled with it all - it was like a new toy. They were out there jumping after dinner even in the light rain that had started to fall. It really is like a little "house" for them and they have already asked if they can sleep out there one night. :-)
Posted by Buckland at 10:00 PM