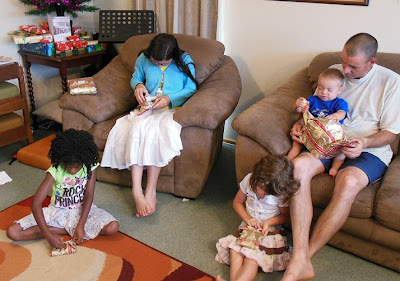 Hezekiah normally wants to eat very soon after waking up - so we suggested the children open just two presents and then have a break for breakfast.
It's always such a build up for children - the excitement of Christmas day just mounting. I think it's the fastest I have seen the younger girls ever get dressed. I think they wanted to make sure they were as ready as they needed to be so that they could get to unwrap as soon as possible. Hezekiah got into the hang of it really quickly and had so much fun. 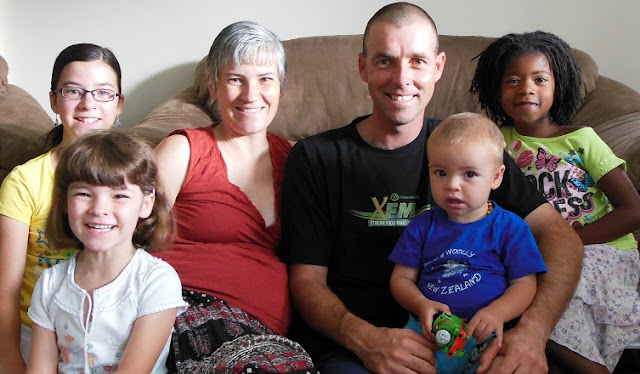 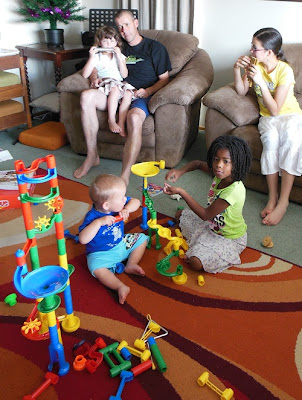 An attempt at a family photo without a photographer. Brendon told Hezekiah to watch the flashing light - so at least he was watching the camera. As soon as the photos were taken he would smile or laugh. So no happy Hezekiah for the photos. I should have tried to set the camera up to take a few photos in a row. :-)
The presents this year where mainly family presents in that they don't belong to anyone in specific. Lots of different musical instruments which were immediately enjoyed and passed around. And the "big" one was this marble chaser set. I had bought a smaller one before off Trade Me but it was too hard to get the pieces to fit or come apart - so it was lovely to get one we knew even Hannah would be able to build with. We had some family fun building a couple of runs quickly and Hezekiah had so much fun putting the marbles in.
So far Hannah is the best one on the Pan flute, everyone enjoys the Harmonica and Hezekiah's favourite is the triangle. I am always amazed at how quickly children can learn. He worked out very quickly that he needs to hold the plastic handle (not the triangle itself) to get the best sound. 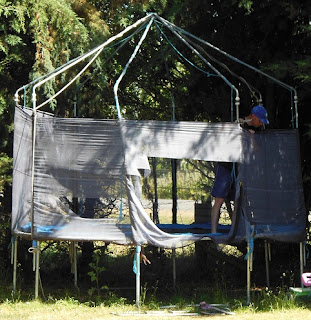 Once Hezekiah was in bed for his morning nap Brendon and I got busy with the tramp. Our new safety net arrived yesterday (I was so pleased). So on Christmas 2 years ago we put the tramp up. This year - we replace the now very old and damaged net. :-)
This morning's job was to get the old net off and try and get the canopy fixed (which got damaged a month after we set it up 2 years ago). Three of the safety net poles were damaged in that bad wind and finally (with buying the new net) we have new poles (they sold us just the 3 we needed which was great). 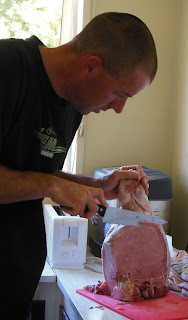 When we got our last pig the butcher had left one of the legs uncut and so we had gotten it made into a ham. It is the first time I have had a ham and boy was it a big one to start with. We had some on Sunday already and Brendon just cut more up for today's lunch. Cold ham for Christmas seems to be a very popular Christmas tradition in NZ - and we now know why. It also explains why it's actually quite a busy time of year for the farm (the lead up to Christmas) with all the extra hams that are made. 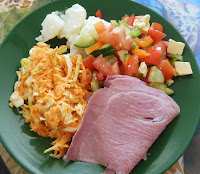 It was a scorching hot day and so our meal of ham and salad was just perfect. Apparently it got up to 41 today!!!! At 10:30 this evening it was still 27 degrees inside. It was the first time I have really spent any time outside with this weather and I really got a good idea of how draining it has been for Brendon to work in this heat. 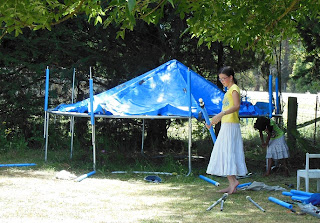 After lunch we got back to the tramp. The canopy was not as easy as we had hoped as the poles don't just stay in their right place. So eventually we had it build up as much as we could on top of the tramp (with something in the middle holding it up). We taped up all the rips from the wind damage (with Duct tape - as any good Kiwi wood) and the girls helped get all the poles ready for the new net. 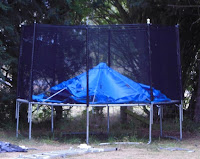 Great team work and the net was done by dinner time. Brendon suggested that we wait till we can organize a few extra tall men to help lift the canopy up. It would just be too hard for us to do it on our own. So the job is not totally finished - but we got a lot done. 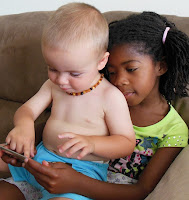 Another item that arrived yesterday was my free iPad (a great business incentive that I won). What lovely timing - just for Christmas. I loaded some free spelling and reading apps onto it for the girls and when they were playing with it this afternoon they had the iPod out with one of the apps going on that too. Hezekiah was so interested and so was allowed to play on the iPod - not quite playing the game properly - but enjoying touching all the things that came flying across the screen and loving the eggs that splatted all over the screen (when he hit the ones he was not supposed to hit). 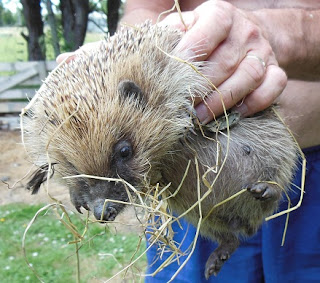 There was much excitement when Ruth went to fetch the eggs this evening. Brendon had told her to go and see if she can see anything different (he had been in there just before her). She came out screaming (not quite the reaction he was expecting). They all then headed back calmly and Brendon brought this big hedgehog out. It was making a lovely little nest in the chook house. I wonder if it was not thinking about aestivation (like hibernation but in very hot weather) as the heat really has been quite unbearable. 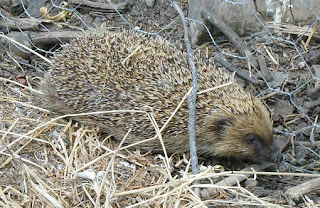 Everyone had a bit of a wipe and then Brendon put it down and it was off. Thankfully it could not easily get through the fence to head back into the chook area and so we watched it as it headed off away from the chooks.
We thank the Lord for the lovely day we could have together today and most importantly we thank Him for sending Christ.
Posted by Buckland at 10:00 PM