Out in the sun and off for a run 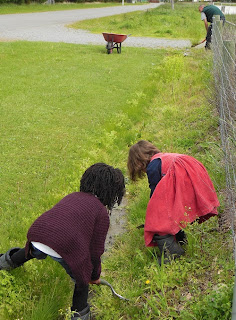 Brendon's hope for yesterday was to get this gutter cleared out. He got started but soon headed indoors as the rain came down. He works in the rain - so when you have a choice it's nicer to just come inside. Brendon probably would have just worked in the rain if the girls had not been with him.

Not sure what the birds were enjoying today. Thankfully not my seedlings. All the seedlings I planted have either been eaten by birds or hit by frost. :( 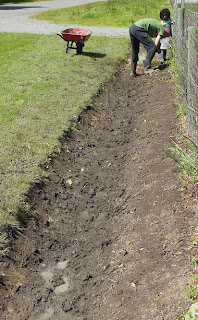 Thankfully the weather today was much nicer and so they got stuck in and got the whole section done. 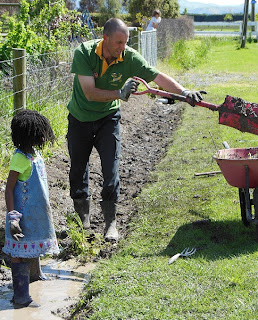 That last little bit was extra fun for Ruth as she watched the "dam" break and the water flow down a nicely cleaned gutter. 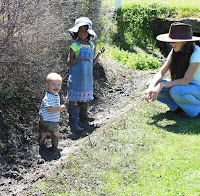 He even got a few meters done of the next section. Hezekiah was out there with them during that time (with Rachel supervising him). 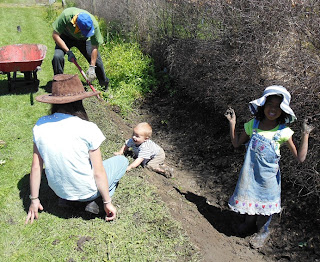 He had so much fun in the mud and enjoying climbing up the side and having Rachel help him slide back down. 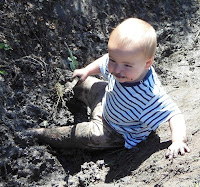 Mud fun - and his first taste of a worm. Ruth wanted to show him an earthworm and I knew what would happen. It was incredibly quick though that I could not even get to tell Ruth that he would eat it. He bit it in half and Ruth decided to rather take it away. 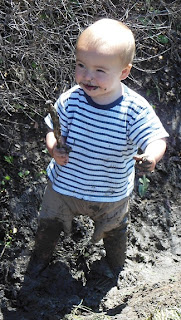 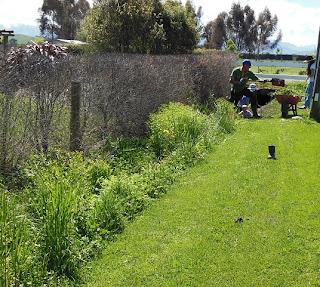 Brendon did not get as much done as he would have liked - but at least it's started. It's hard heavy work. And just for the record - it's work the council should do. The drain along the other street is really bad too but deep enough that the water is still flowing. 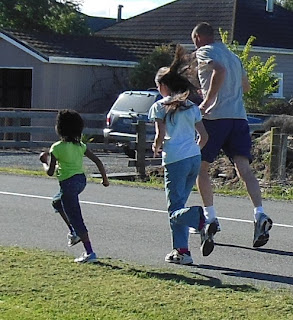 Late afternoon it was time for a run. Ruth had been given shoes and then Christine lent Rachel some - so no more bare foot running and they could head all the way up to the shops this time. 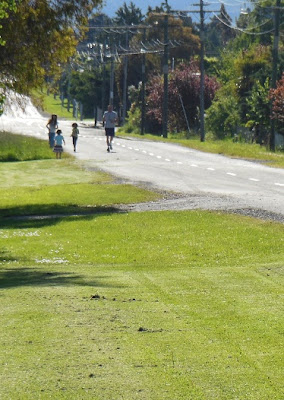 Hannah was waiting with me and asked if she could walk up to meet them. So when they got to her at that point she ran back with them. 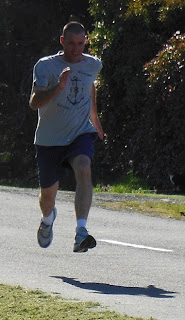 They had decided to do a bit of a sprint at the end and I got this nice one of Brendon - in the air. 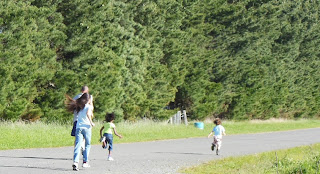 Ruth was not tired though (and Brendon knew she could go further) so they headed down to the Play Centre and back. Hannah decided to run with them but was really tired as it was just too far for her and she was left at her own at the back (which probably upset her more than being tired). 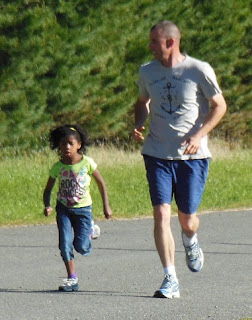 Brendon had told Hannah he was not going to stay back with her though as he wanted to run with Ruth and try and get her to go a bit faster. Although Rachel ran with them she is not a natural runner (she is too much like me in that way). It does look like Ruth might be the one to get Brendon running again though. She just loves it and is always asking if they can go for a run. So hopefully this summer these two will get to go out often. At least now Brendon knows Ruth can managed running around the block. It's about 1,5km - so a good distance for her to get started on. :-)