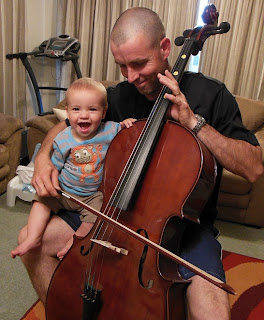 Monday saw the start of our new "to do list" and added to my list is making time for Brendon to get on his cello. So once the girls were in bed (Hezekiah only goes to bed at 8 - half an hour later) I kept Hezekiah away so that he could practice. Hezekiah was thrilled to sit in front and just put his hand on the cello and feel the wonderful vibrations - but a little later Brendon picked him up and let him hold the bow with him. You can see how happy he was with that. This little boy just loves music. 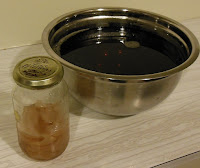 Monday also saw me start a Kombucha for the first time. It's a mushroom that you ferment forming a fizzy drink apparently a bit like ginger beer. Rachael (the ballet mother who visits every Tuesday afternoon) gave me my first mushroom last Tuesday - so at least I got it started before I see her again this week.

You add some sugar to boiling water - add organic black tea bags and then allow that to cool. Once it is cool you add the kumbucha mushroom and leave it to sit in a warm place for 7 to 10 days. During this time a new mushroom grows on the top of the liquid - so either I will have two mushrooms to make two batches (if the family love it) or I will have a second mushroom to give away. The tape over the bowl is so that a cloth can cover the bowl for the week while it ferments. So watch this space. Next week I should be able to give you my family's opinions. Rachael has 4 batches on the go at the moment as her family really enjoy it - especially on the hot days we have been having at the start of this week. 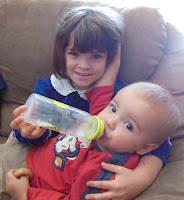 Tuesday - not the perfect angle to take this shot as there was so much sunlight behind them - but a cute one of Hannah giving Hezekiah his bottle. 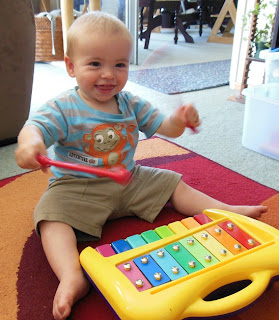 This is a better photo to show the wonderful quality of my new camera. The top photo too actually. I love that it is specifically working wonderfully indoors with not ideal lighting. And what beautiful clear photos too. I am so pleased. :-)
And look at that happy musical boy again. I finally got to swapping toys around and took a big bag of baby toys out to the garage and brought in some others. This was among the new selection and he learnt so quickly hot to hold the mallets (I had to look up what their official name was). He also knows to only hit the xylophone part with the mallets and use his fingers for the lower keyboard area. It's just wonderful when music can bring so much joy. 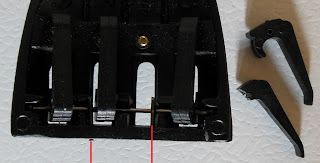 Music can also bring frustration. I had that with Brendon's cello this week. We had the 2nd fine tuner break - on Tuesday morning around 3am. It gave Brendon and I such a fright as the cello is kept in our room and it makes a huge noise when it breaks. It's not even 6 months old - so it's really frustrating. When the first one broke I sent the whole tail piece back and when they returned it they gave me an extra fine tuner piece. I finally managed to find it and by the end of the day had managed to replace it (easier said than done). 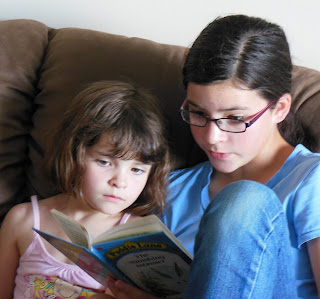 On Wednesday I met with the head master of the local school to discuss our children's involvement with the school and extramural activities they have on. We had a really good meeting and got to discuss all that will be involved with it. I am really thankful for his willingness to help us in this area. It would not be an issue if we had more home schooling families around us - but with us being in the country it makes it a bit of a challenge. I am really thankful that the school's policy is to help home schoolers as much as they can and I felt really positive after our chat. Everything the girls have been able to participate in so far has been such a blessing to us and so I look forward to them having more opportunities in the years ahead. The girls know many of the children their age as well as a number of the teachers - so that helps too.
Photo - one of Rachel's "to do list" items is to read to her sisters. She loves reading to herself but needs the extra bit of encouragement to take the time to read to them and Hannah especially appreciates this. 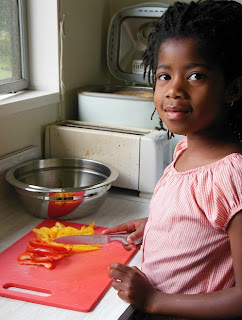 On Thursday the builder came around with the electrician so that he could get his quote in for our new room. On Tuesday we had the valuer come around - so hopefully within the next week or so we will have our Registered Evaluation and the Fixed Price contract from the builder - two conditions on our loan approval. One step closer......
On Thursday Ruth was very pleased that I got things out early enough for her to cut up most of the items for the salad. She always wants to help but I don't always leave enough time and have to often do things quickly myself. I am learning though that she really loves this and so will make an effort to give extra time to have my helper doing more and more.

It has not even been 3 weeks and Rachel has finished that big book she was lent. Kerry saw it when she visited and so lent Rachel the whole Love comes softly series. She already got started on the first one on Friday and was onto book two by Saturday. :-)

On Saturday evening we also finished watching the final Lord of the Rings dvd. I don't think Brendon and I ever got to watch this one - so it was nice to see the completed story. It was nice for Rachel to watch the movies after reading the books. She was actually the one who got them out the library (and paid the $2 rental). 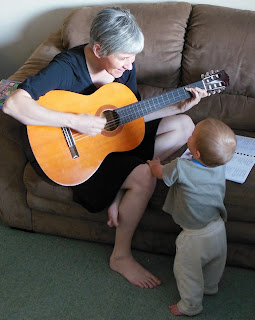 And to round off the musical week Brendon got a photo of me on the guitar. With me making more effort to get Brendon time for his music I thought I would see if I could get the time for myself too. It's been great to get the guitar and song books out again and the children are really enjoying it too. As soon as I get it out they all come running. We have focused on learning a few simple songs for Hannah's sake. So she has felt included as she is able to sing with now. And Hezekiah just loves it as he does all music. :-)
Posted by Buckland at 10:00 PM