What a busy week 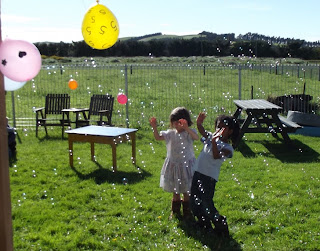 On Tuesday we headed down to Play Centre for one of the girls 5th birthday party and last day at Play Centre. We normally only attend the Friday session and I was reminded again today why. Little Hannah just does not cope with it when there are so many children. The main reason is probably because there is more chance of someone saying "I'm not your friend" which just breaks her little heart.
The bubble machine was fun though - and although the children had headed off for another fun thing to do - I asked Ruth and Hannah to come and pose for a photo. :-)

When we got home I decided to try and get some of these seedlings planted. Especially the corn, sunflowers and marrows. You can see form the first photo how lovely and warm it was with a beautiful clear sky. While I was busy though a massive dark cloud came over and eventually it was pouring down. Ruth quickly got Hezekiah in while I put the last two seedlings in (they had taken turns helping with the previous ones). And it went like this a few times through the day. It felt like we were living in Auckland. :-) 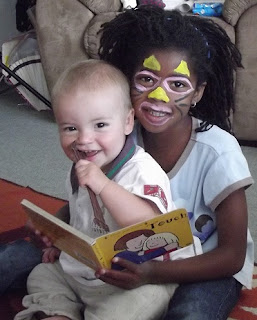 Rachel was at the school this morning and again at lunch time for music practice. They got to sing one of their items during the Assembly this morning - so that was something different and nice for Rachel to experience.
You can tell there was face painting at the party this morning too. :-)
On Wednesday morning I had Sandy (my midwife) visit. It was good to catch up with her again.
After lunch we had Kerry come and visit with her younger ones and it was nice for me to get to catch up with her too.
Thursday saw me out with Rachel from 8am till after 11pm. Thursday gets a whole post of it's own though. 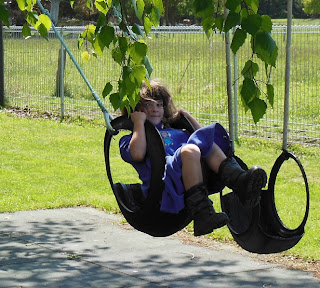 On Friday morning I decided I would rather have Hezekiah at home for his morning nap so that I could just get some time at home after the whole day out on Thursday. Because Ruth is now 6 she is no longer registered with the Play Centre although she can visit as Rachel does when I am there. So Hannah had to stay on her own today. I was wondering how this would go after the tearful day on Tuesday but she was absolutely fine. 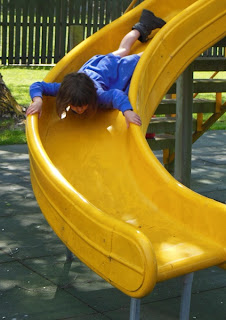 There were only 5 children there and so she got loads of time with the teacher getting a huge pile of books read to her. She also spent time playing with the others and also playing on her own. So it was a great morning for her and I felt a bit more normal for the hours spent at home. 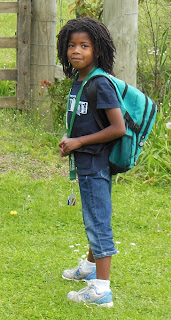 A lovely photo of Ruth in her new sneakers. I am so thankful to one of the ballet mothers who - after reading my previous post about our barefoot runners - said that her girls had a pair that did not fit. They look hardly worn (what so often happens with how fast their feet grow) and Ruth was thrilled with them. She ran up to fetch the post today. I can't believe how big she is getting. She is now as old as what Rachel was when we moved to NZ.
Noortjie phoned to ask if the younger girls would like to go with her to "messy church" in Waipra this afternoon. They left before 3 and were only back after 7. I was really pleased that Ruth got something special to do today as she was disappointed with not going to Play Centre in the morning and then Rachel and I were out to Youth Group in the evening.
So this week - and especially today - it's felt like a train station at our house.

It was lovely to have everyone home on Saturday though for another fellowship meeting. It was only Kerry with her children this time but it was a lovely time of getting to know one another a bit more. And still a garden full of children having fun - so that was special too. I did not manage to get Hezekiah in this photo but he had so much fun playing tag with the rest of them. 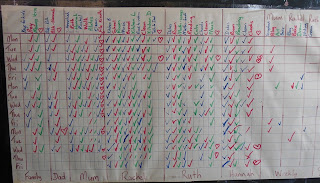 Our "chore chart" for the last 3 weeks has filled up - so a new one is now in the making for the next 4 weeks. It's been great to see how much it has helped everyone and how it is helping to get new habits formed.
Posted by Buckland at 10:00 PM