Rachel and I were on the road before 8am this morning for a long day ahead. The music teacher was struggling to find mothers to help with the traveling and so I managed to organize Noortjie to come and spend the WHOLE DAY with my younger 3 so that I could help out.

So we picked up our 4 other passengers and headed off for morning rehearsal. I dropped them there at 9:30 and then got some of my own errands done including picking up my replacement camera.

I love the top photo of the whole group. With 2,000 children singing it was just amazing. I got back in time to get a few nice photos of them. 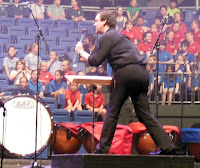 The conductor that I got to see was full of fun as well as giving them a lot of instruction on how to make the performance even better.
The rehearsal was done by 12 and so we headed off to a local shopping centre for lunch. 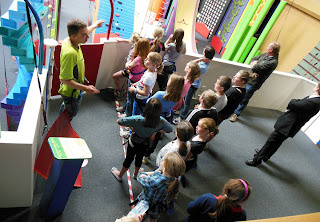 At 3 we had an hour booked in at Clip and Climb. After getting their harnesses put on and checked they got the safety talk and then had to slide down the fireman's pole to get started. 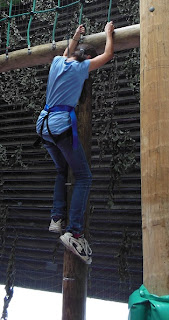 Rachel got started on this one but after going about half way up decided to start her descent. She was NOT interested in letting go but wanted to climb down. I then learnt that the last time she did climbing she was hurt really badly when coming down - twice. 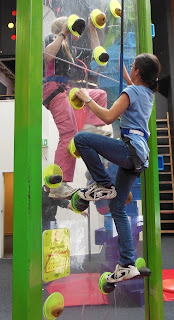 This was the next one she tried. I fun one where you can race with a friend. 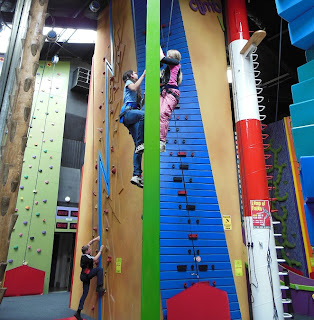 It's a rather difficult one to climb - so both Hayley and Rachel did really well to get this high. I think they stopped not long after I took this photo. Rachel then carefully climbed down. 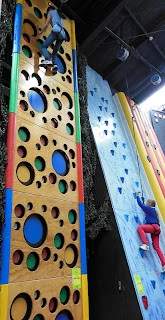 I suggested Rachel spend some time on this wall as it was a nice easy one to climb. I encouraged her to just climb up 1 section and then practice coming down. Then she went up a little further each time. After doing this 3 or 4 times she went right to the top.

And managed to let go. The other children where all cheering for her and where a great support and encouragement. Once she was down she even got some extra tips - like leaning backwards so that the rope did not hit her in the chest. This also helped her to get her feet more in front of her so that she could feel safer (using her feet if need be to stop her bumping into anything). 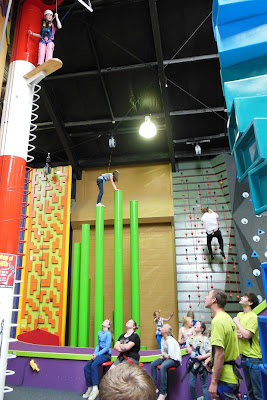 It was incredible that the fear had nothing to do with the height - it was just the memory of being hurt coming down. She proved that by climbing up those green poles later - I just missed getting a photo.
This photo was great though - with three activities on the go. 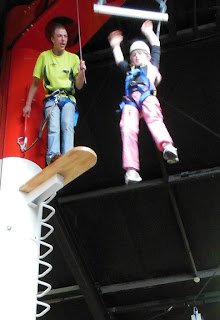 Hayley was about to do this "leap of faith" where you jump out and try and catch the swing. She was a bit nervous though and so one of the helpers headed up and brought the swing to her. She then held onto it and dropped from there. 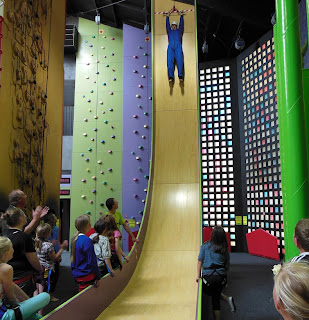 The "leap of faith" and "vertical slide" were each an extra $5 - so not everyone had a turn. It was fun watching those who did though and they all got cheered on wonderfully. The music teacher went all the way to the top of the slide - so that inspired some of the other children to do the same.

Rachel then found that these were lovely ones to have "races" on. 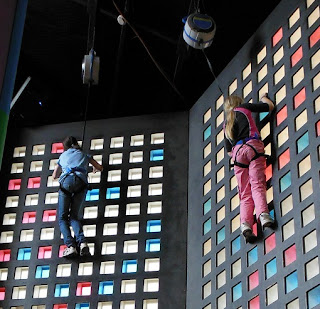 And then someone else to race. Hayley gave her a run for her money. :-) 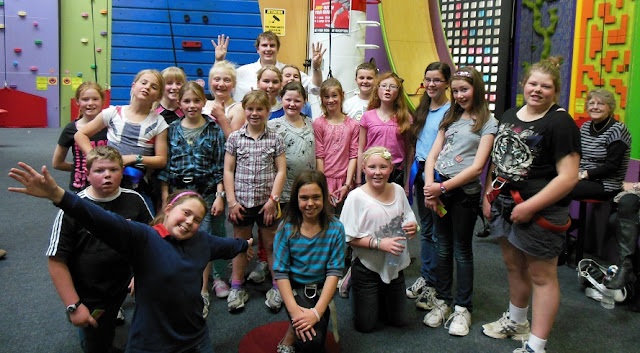 I think all the children had a great time.

We then headed to a local shopping centre to kill some time and have dinner before being back at the arena by 6pm. The tickets are booked really well so that you are opposite your own children. So this was our view with Hurunui College directly across from us. I was so thankful for my new camera as I could get nice photos without a flash (flash photography not being allowed). 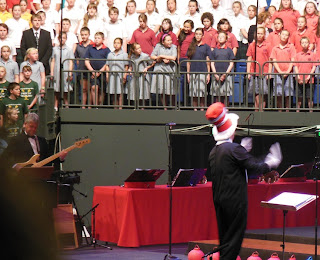 The conductor dressed as the "Cat in the Hat" for their Dr. Seuss songs. What fun.

There were different groups of people accompanying the choir on various instruments. This really inspired Rachel to work on her violin. Rachel said this conductor was a lot of fun. How she would love to be able to play in something like this. Just being a part of the singing was incredible though. 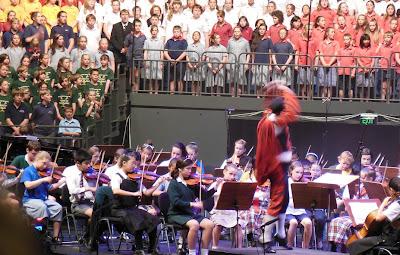 Loads of fun with the bull fighting song.

This was probably one of the highlights for me. This orchestra was just incredible. They accompanied the choir for a number of their songs and I so enjoyed them. I enjoyed them so much I totally forgot to get a small video clip of them all.
It was an amazing evening and I thank the Lord that we could be a part of it.
Posted by Buckland at 11:30 PM