Balloon heads and a billy goat

Someone had fun last night with some balloons. This table was "set" this morning when I came to make Brendon and I our early morning coffee. We were up by around 5:30 or 6 every day and breakfast is only at 7:30 - so a coffee and rusk was a must.

Hannah was especially entertained by the balloons when she saw them at breakfast. All set up playing a game - complete with faces and even one (sleeve) holding a mug of coffee.
Ruth learn a new game this year and I had to laugh when I saw her playing it this morning. Age is clearly not an issue for her. It would probably be called "Double this, double that". 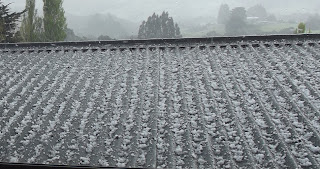 Just before lunch there was a huge thunder storm accompanied by lots of hail. A lovely memory maker for the children. Thankfully Brendon had gotten quite a lot of our stuff packed before all the rain - but it did make packing up and getting everyone into the car a bit more of a challenge. Our car was solidly packed with Hezekiah's high chair wedged in next to Ruth. So it was a tight fit and a bit tricky in the rain. 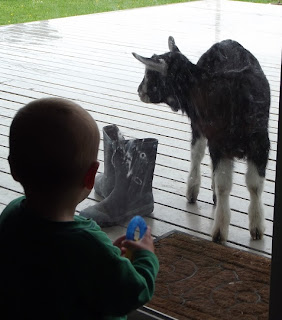 We got home and started unpacking and sorting things out. I heard this "Baa" sound and could not work out where it was coming from. I could not think of any kids toy that had such a realistic sound to it. So I looked out the window and could not believe it - there was a kid - bleating sadly wanting to come in. 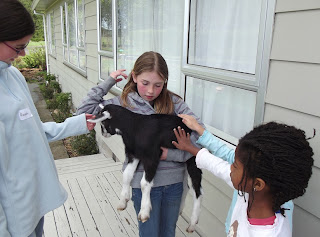 Thankfully the first neighbour I got hold of said it was hers. The lady who dropped it off obviously got the directions slightly wrong and dropped it on the right instead of the left of the road. It was still a bit nervous about being caught and picked up - but hunger helped. At least the children got to give him a little pat before he headed off home.
Posted by Buckland at 10:00 PM