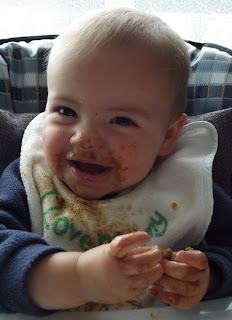 Monday 8: Another item that we got from the left over food at camp was a packet of ginger nut biscuits. Hezekiah had a try of one today and it was a wonderful success. It kept him quiet for ages. :-) And it did not take too long to clean him up afterwards either. 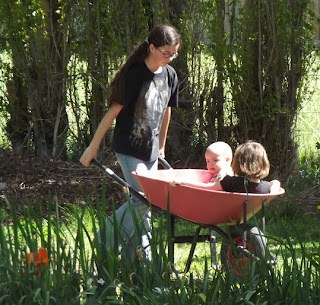 Wednesday 10: Rachel spending some time playing with the younger two outside in the lovely sunshine. It's the time of year where you have to make the most of it. You just never know when a day of rain and cold may arrive. 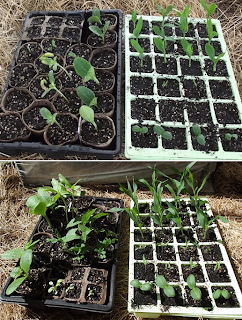 Thursday 11: An update on the seedlings. Top photo taken on the first - and then the bottom one today - 10 days later. We had our neighbour come and check on the chooks while we were away and so she checked on the seedlings too. Two years ago we lost our whole lot when we went to church camp - so it was nice to see them doing so well after our time away this year. Now we just need to find the time to get some more planted so that we can have a continuous supply - especially of the lettuce, cucumber and tomato. 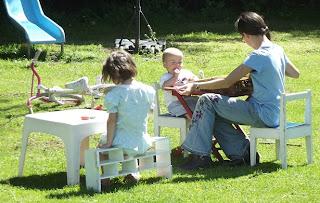 Hezekiah sitting so nicely at the table and Hannah being creative in finding a seat for herself. Another glorious day.

Saturday 13: Finally the day for the Polkadots concert has arrived. Hannah has been counting down the days. It was a free concert - just needing to actually book tickets on-line with them (which they then e-mailed and I printed out). They even gave a free download for the music for the concert so the girls have been learning the songs over the last month or so. 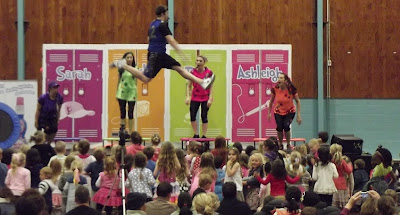 The younger girls had both left socks at camp so we organized with Mark and Katrina to pick them up on our way to the concert. They invited us to have lunch with them and it was great getting to know them a bit more.
The day turned out to be a LOT colder than I had anticipated - so the girls and I were not dressed as warmly as we would have liked. 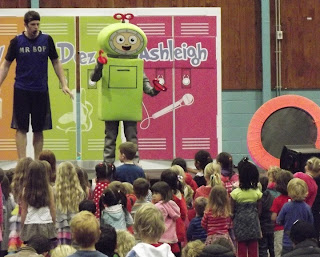 Some fun "extra" characters for the children to enjoy. Hannah said her favourite song was when the polkadots dressed up and the one was a Tiger.

Hezekiah enjoyed walking around and dancing with some of the songs. There were free water bottles and yogurt samples being handed out - so he enjoyed that too.

Hannah really enjoyed the concert even though she said her legs were sore after jumping on the first song so she did not do much dancing along. In the week afterwards she would often say that she wants to go to the Polkadots concert again - so it was a wonderful memory for her - and that made the cold day out really worth it. Even as I do this blog post a week later - when she saw the photos she again said she wants to go again.
Posted by Buckland at 10:00 PM