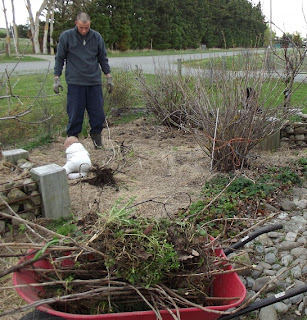 Hezekiah enjoyed "helping" Brendon outside with some gardening on Saturday morning. Unfortunately as soon as he saw me come out he started moaning to come to me and Hannah headed off too. If I had just managed to creep quietly out a few minutes before I would have had a lovely photo with Brendon and all three younger ones with their hands all busy. Brendon has been doing his best at working out how to prune the berry bushes. At least having cut off the dead branches and the ones that are too low. 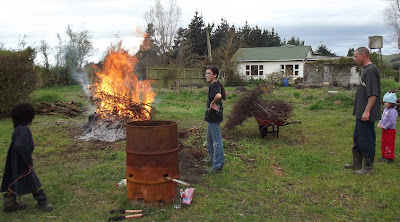 Our neighbour had a fire going in the afternoon and so Brendon asked if he could bring over some of our old dry stuff to burn. He must have taken over 6 wheel barrow loads full. It was so nice to get rid of it.
Rachel had been roasting marshmallows by the time we got there and so she did a couple for us as well. :-)

This morning Ruth asked if she could go over to the horses with Rachel. Because I knew Christine was going to be there I agreed that she could go over. She was also hoping she might get a ride - so made sure she had her helmet on. 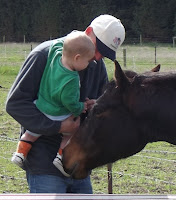 Once Hezekiah was up from his nap we all headed over. Hezekiah always sees the horses from our lounge and so he was thrilled to get up close. 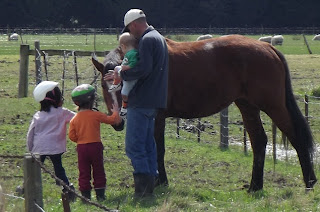 While Rachel was doing some lessons with Christine the other children enjoyed patting the other two horses. This one is Chicken. 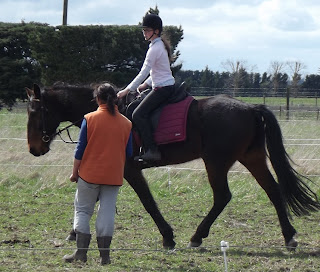 Christine is actually the one who has encouraged these lessons. Charlie is her daughter's horse who has been "visiting" and will be going back soon. Christine has asked Rachel to come down every afternoon this coming week for a lesson. Wow - what a blessing. 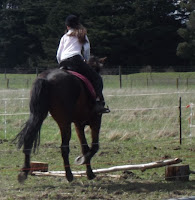 Charlie is a very big and strong horse and so Rachel does not ride him bare back. Because of the extra time she has had riding him - Christine allowed her to do a small jump today. Christine has said that Auto (the horse Rachel normally rides and does a lot of bare back work on) is now too old for jumping - and so Rachel has missed the jumping practice. She was even jumping bare back with Auto. So it was nice for her to feel like she was doing a little bit of jumping work again. 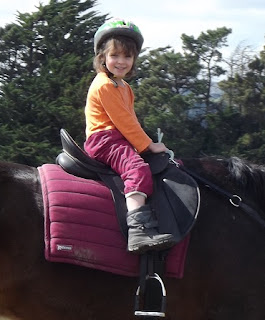 Hannah then got to have her ride (Rachel leading her around). 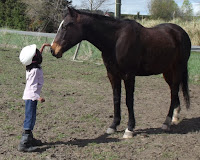 Ruth giving Porky some attention. He is a very gentle horse and so friendly. Ruth had already had a ride and so she was patiently waiting - hoping she could perhaps get a second ride (which she did). 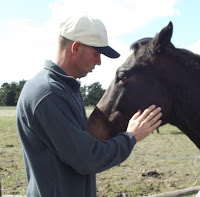 Porky even got Brendon to give him some affection. 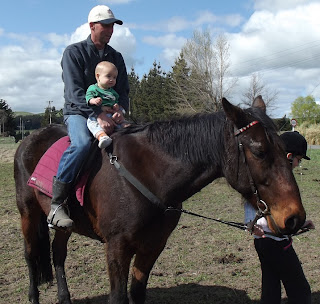 Hezekiah then wanted a ride and it was going to be much easier with Brendon up there with him. It was incredible to see Brendon up on a horse. It's a place he would really rather not be. :-) 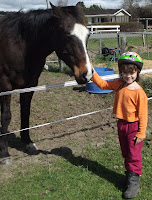 Hannah's turn to have a chat with Porky. It's lovely to see the children so relaxed around the horses (as I drill in safety). It helps having horses that just make you feel comfortable though. All three of these horses were just so friendly. 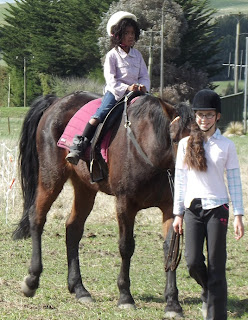 Ruth got a second ride which was nice - for her and mother with the camera.

We had a laugh after lunch as we spotted Ruth in Hezekiah's swing. I went and took this photo but when I was back inside she did not realize we were watching through the curtain. The real reason for our laughing was that she had tried to get out but was stuck. When I came out to take the photo I asked her if she was stuck and she said "no". 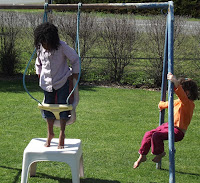 She just had to work out her plan still. Thankfully Hannah was around to help out by fetching their plastic table. Ruth had made a plan - and it worked. Our little engineer in the making. :-) 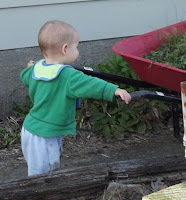 Later in the afternoon we finally got around to planting our seeds. Hezekiah again LOVED being outside and playing around in the beds (and mud). 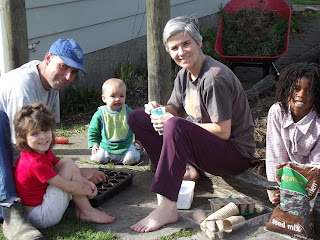 Rachel spent the afternoon reading inside (no surprise there) - but helped us out by being photographer so that we could get this nice photo. Thanks Rachel. There were only two seed trays available at the shop I bought things on-line from and they both have lids. So this should help keep the seeds moist and warm through germination. We are looking forward to seeing them start to grow. Ruth was a great help putting the potting soil in and then they both helped planting the seeds. Oh - and double click on the photo to see Hezekiah's face up close. He had so much fun. :-)
Posted by Buckland at 10:00 PM