Although officially we should have waited till at least Friday to eat the Feta - the girls were so excited about trying it that we made a salad with it today. It's terrible to have to pay SO MUCH for tomato, cucumber and lettuce - but it was really enjoyed by all. I look forward to the warmer weather and hopefully prices coming down. Not to mention eventually having them growing in the garden.

On Thursday I took Ruth down to the mobile dental clinic in Amberley to just check out her gum. It looks worryingly low on her first new tooth. The dental nurse checked it really well and assured me that there was no root exposed. So her "big teeth" are just really big and so the gum is lower than on the baby teeth. I only realized once we were on the road that I should have taken my camera with. So a photo from my phone will have to do. It's a lovely set up they have and makes it so easy for them to visit all the schools through the year. I am glad it was not too far from us for this unexpected visit.

This week for Rachel could be summarised with "horse riding". She has spent many late nights riding with Christine - getting some more lessons in. Here they are heading off on a ride together. Christine's daughter (the owner of Charlie) was here for the weekend - so Rachel was back on Auto for this one.

On Saturday we headed over to the farm to get some nice old pig poo (manure as it's nice name) for our veggie garden. And even though I had my camera the photo was all fuzzy (so no real improvement making it bigger). Ruth as always wanted to help. It would be lovely to be able to borrow a rotary hoe and dig it in. At least we got the load though as it will add so much to the soil. 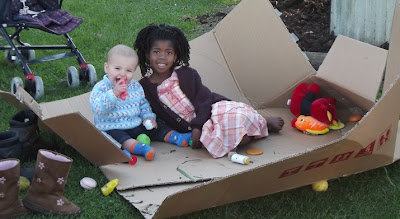 Ruth also helped by playing wonderfully with Hezekiah once he woke from his nap. She is such a special big sister. We had been putting boxes down over the manure (we have been collecting boxes for ages) but this nice big one from Brendon's cello was a nice play area. 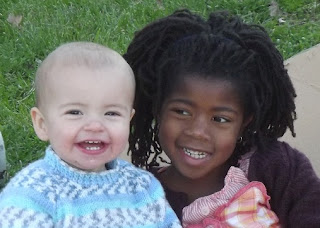 A nice close up. I think these two will be good friends. 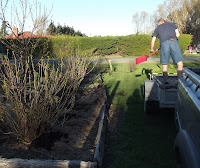 And the last little bit for the berry and fruit area. I had no idea a whole trainer load would get spread so far so quickly.

Beds done - with the bigger one even covered with boxes.
Now to just get some straw to keep the boxes from flying away. :-) 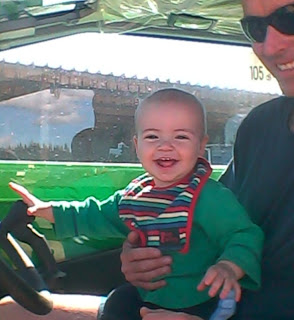 Oh - and while we were at the farm Hezekiah got his first touch of a piglet. I can't believe it's his first time "up close" and he is almost 1 already. Again - I forgot to bring my camera - so could not get a photo. But I took a photo with my phone of his first little ride in a tractor. He was THRILLED.

And just for the record - this was the tractor.
Posted by Buckland at 10:00 PM

Labels: Garden, Horses, Meals and Food, These make me smile