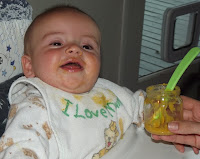 Even though I never felt Hezekiah had a huge appetite when it comes to drinking milk (I obviously have always just had more than enough for him) - now that he is onto solids I can see the difference between him and the girls (you can't "see" how much more milk he is drinking). For the first few days he just had a couple of teaspoons. Well - in less than a week he is finishing 120ml bottles of food. So much for thinking I could freeze food in the little containers that I used for the last two girls - they are way too small. 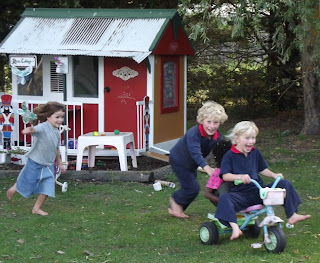 On Wednesday Sarah popped in for a cuppa and the children had such a fun time outside together. Neeve and Ruth are such contrasts in colour. They are just a couple months apart in age and do ballet together now - so it was nice for them to get some extra play time together. 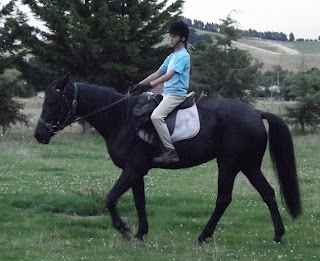 Christine had suggested Rachel come for a ride after dinner. So I headed off with her to get a few photos. She is so happy being able to ride almost every day. Christine has told us about a Derby on Sunday and with the weather forecast not looking so good for the next couple of days - the extra practice this evening was her suggestion. Make hay (get practice in) while the sun shines.
Thankfully the weather report was wrong and Rachel got to practice again on Thursday and Friday. I found the pair of jodhpurs that Rachel had been given years ago and other than needing a new elastic they were perfect. 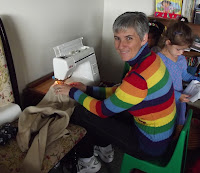 So I made a plan with my sewing machine on Thursday and got a new elastic put in for her. She is so excited about Sunday. Christine even gave her an old jacket that was going to be thrown out as it had a bit rip and Rachel and I got that fixed up too.

Small jumps already.
I got some short video clips of Rachel riding on Wednesday too. It's amazing how much she has learnt in just two weeks. She really is a natural. 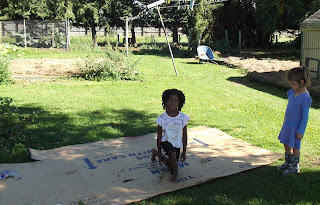 The weather was so good in fact that Hezekiah and I spent quite a bit of time outside. This helped me stretch him to a 4 hour schedule (he woke up but I wanted him to wait for an hour before having milk). So this allowed me to get loads of work done on the veggie garden. I got it all covered with straw over the few days I worked. Ruth was a big help too. She especially likes taking the staples out of the big boxes that I got. 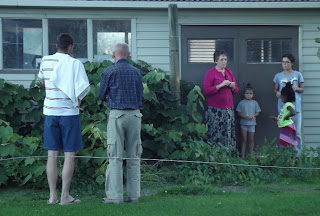 On Friday Brian and Julia came for dinner. It was lovely to catch up with them again. The girls were so excited about showing them around the garden and were pleased to see the grapes were ripe and ready to be tasted. 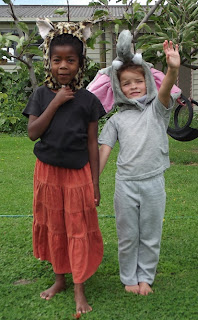 On Saturday Rachel went up to the show grounds to help get things ready for the Derby and then spent a few hours getting Auto and all the gear cleaned and ready for tomorrow too.
The younger girls had a birthday party to go to in Hawarden - one of the little girls from play centre. So that was a highlight for them. Also fun to dress up as animals for the party.
Posted by Buckland at 9:00 PM