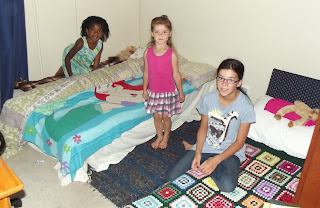 Before we headed off to my parents today I remembered to take a photo of the girls beds. Something simple perhaps - but nice for them to be able to remember how it was set up. Brendon's parents had bought the single fold out bed for Rachel to use when we visited while living in SA (with only 1 bed needed for children) and then bought the double fold out bed for the other two on this trip. They totally rearranged their study to fit the girls in which we really appreciate.

On the way to my parents we laughed so much. After our trip to Mabula Hannah now calls VW Beetles - Dung Beetles. So every time one was spotted on the road we heard Hannah say "I see a green Dung Beetle" ect. And then to have a "Dung Beetle" parked at my parents place was just the cherry on top. :-) 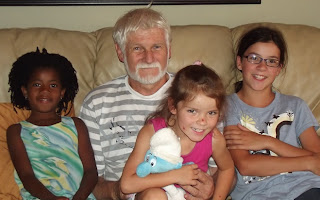 My Dad was on his way out to give blood when we arrived - so he ended up taking all three girls with him. He always encourages children to see it as he saw his Dad give blood when he was growing up and so it was just natural for him to do it himself.
It was funny to hear the stories when they got back though. Keep in mind that Hannah thought there was "so much blood" at Hezekiah's birth - an entire 1/2 a cup perhaps. So to see a whole bag of blood was quite something for her. She asked Oupa "are you going to die". Oupa and Hannah have become such special friends through all the times we have had to visit. What a blessing. 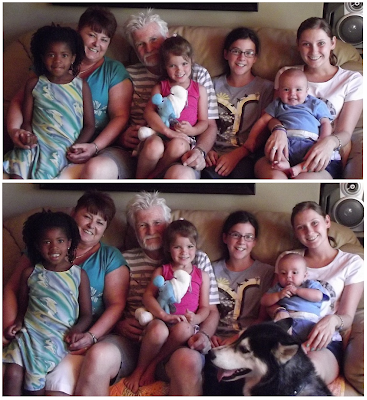 And as we had the camera out we decided to get a fuller photo. One of the dogs decided to join too. And I could just not decide between the two - so put them both on. The 2nd photo is probably in general better - but Hezekiah's lovely smile is precious on the first one.

While the girls were out Michelle got some extra cuddle time with Hezekiah.

And again we were blessed with wonderful weather and the pool was enjoyed - again. :-) 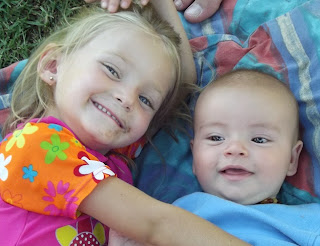 Nicole does not really like the cold water - so although she did have a swim she did not stay in as long as the others. So she enjoyed some time with Hezekiah. It was a bit too cold for him today too.   What a blessing to have Hannah so relaxed in the pool now. 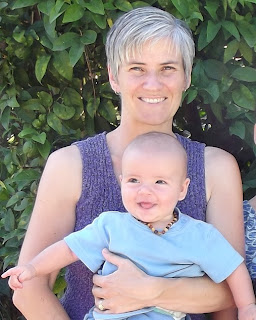 We tried to get a new family photo but Hannah pulled silly faces and they did not look great. At least it was a nice shot of Hezekiah and I.

Then it was time to get some updated photos for our prayer cards. The one we have of Gillian and Paul was taken before their wedding - almost 5 years ago now. And it was nice to get one of Michelle and her boyfriend Michael. At least we have many to choose from for Graham and Ola. 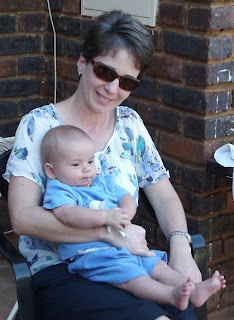 Hezekiah enjoyed some time with Lisa too today. Even though Craig did make an effort to get to see us to say goodbye today (he had so much golf on), I did not have to worry about a new family photo for them as I have a copy of a lovely professional photo they had taken. 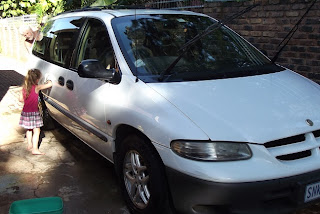 Brendon wanted to get the car cleaned inside and out this afternoon for returning it tomorrow morning. He had so many helpers - not only the two younger girls but my Dad as well. We are so thankful that we could use this car. There are not many families in SA with more than 3 children because of how expensive it is to get a car that has more than 5 seats. 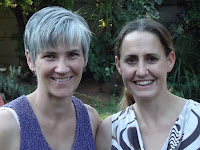 It was lovely to have Gaby pop over for a visit in the afternoon too. We were at school together through primary and high school and have kept in touch over facebook. 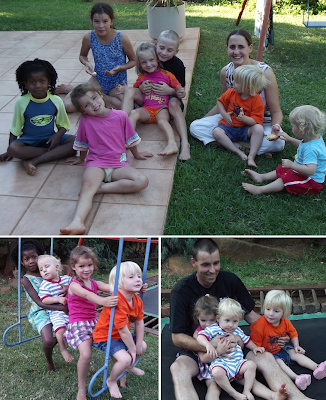 It was lovely to meet her children and watch all the children playing so nicely together. They loved the swing and the fun Brendon had with them on the trampoline.

Another "after dark" drive back to Brendon's parents and finally I got to take a photo of the "coloured bridge". The girls always enjoyed seeing it. They have all done really well with the late nights and traveling around. We have really had a wonderful holiday. 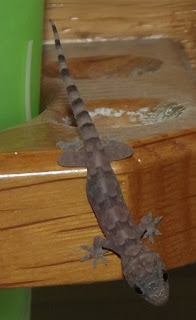 Brendon then took this photo of a tiny lizard that was next to the bathroom cup (yes - those are the holes for the toothbrushes behind it). Great photo Brendon. Thank you God for your amazing creation, for friends and family and the wonderful time we have had in SA.
Posted by Buckland at 9:00 PM