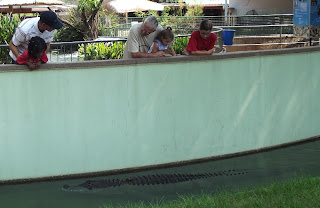 This morning we headed off to Pretoria Zoo. All the girls had this on their “to do list” while we are in SA – so it was nice to make some special memories for them. I asked Hannah what she was excited about seeing and she said “a dragon”. So we started by heading over to the reptile section. It was lovely to watch this croc moving along.

Then we headed into the “Dragons and Monsters” section. Who said they don’t have dragons at a zoo?

A real treat to see Kimono Dragons and Gila Monsters. 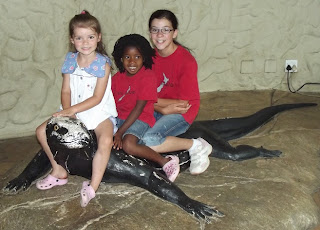 And get a photo sitting on one (even though it was only “pretend”). Rachel remembers having a photo taken of her sitting on it when we visited the zoo years ago. 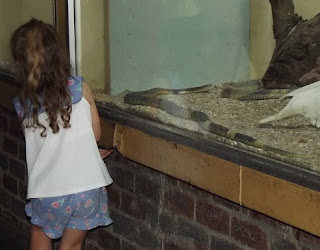 And before leaving the reptile area we had a quick look at some of the snakes. I was really impressed with Hannah as she is normally petrified of snakes and she was quite happy to walk next to this snake even though it was moving along really quickly. 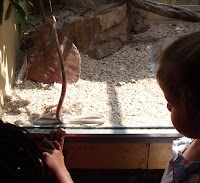 This little one kept moving up the glass and “playing” with anyone who came past.

And we got to see this one move from the ground up onto this branch. I don’t think I have ever seen so many snakes moving around at the zoo before – so although it was a quick visit to this section it was well worth it. 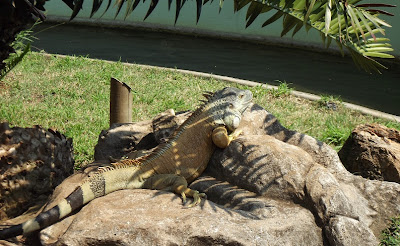 Enjoying the sun – and what a beautiful creature. 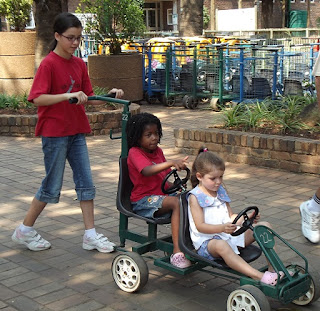 We decided it would be a good idea to hire one of these for the day as I am sure we will have some tired legs after all the walking we plan on doing. And it’s loads of fun too and adds to the memory of it all. Rachel still remembers the one she rode in at our last visit when she was Ruth’s age. 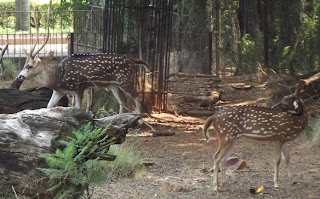 What beautiful deer. We do have deer in NZ but not with pretty spots like this. 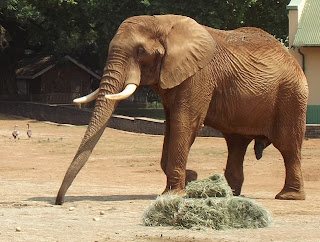 The one “feeding time” that we managed to be at was the first one – the elephants. Although most of them just picked up a butternut and walked a way. This male came along and picked up all the potatoes and other vegetables that had been thrown out for them though. I was feeding Hezekiah on the other side of the enclosure and so did get to see all the butternut being picked up. I had to laugh though when I heard that Grandpa had been calling this elephant “Nellie the Elephant”. Rachel told him it would have to be “Eddie the Elephant” as it was a male.

It was great to be able to get to see more of the hippos than we normally do – especially the baby. Rachel and I stayed a little longer and the mother actually walked over to a different part of the pool. It was so sweet to see the baby follow and actually grab onto it’s mother’s tail to help it keep up with her. 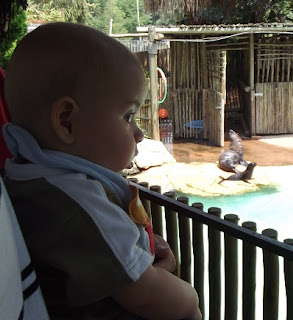 We heard a huge noise coming from the seals and so headed over there. We all had fun watching this mother and baby swimming around but boy was it noisy as all of the seals were making this incredible noise. Hezekiah was looking at the other side of the enclosure where most of the noise was coming from.

Here is a little clip just to give you a sample of the noise. What a pity I did not film for just a few seconds more to get the elegant dive into the pool. 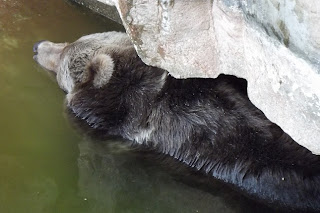 Then we were finally at Ruth’s viewing request – the bears. She has seen so many teddy bears and cartoon bears (there is a cartoon bear on her math programme) that she said she did not know that there were real bears. This one in the water really reminded us of Jungle book and as we all started singing “It’s just the bear necessities” he moved around a little which got everyone excited. 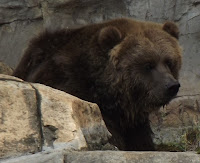 It was nice that the 2nd bear was out the water as we got to see his face really nicely. As we had walked up to this section we were all singing “Lions and Tigers and Bears” from the Wizard of Oz (as that was exactly what we were heading to see). 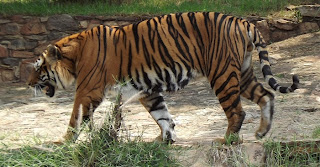 Another blessing was that we got to see the Tiger right at the front of his enclosure. The Tigers and Lions have got really big enclosures and so it’s always such a treat when you do get to see them. Hannah was disappointed that the Lion was not to be seen but her wish was granted later. 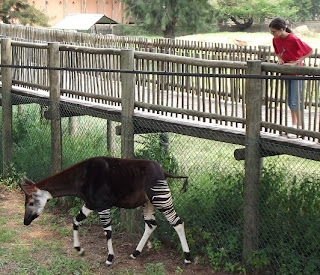 Unfortunately there were union meetings today and so the kiosk at the top of the zoo (after the Tigers and Lions) was closed. So we contented ourselves with some water and headed down to the shop (the only place selling today) for some ice cream. Thankfully we spotted this walkway that gave us at least a bit of a change on the downward route as the normal circle route was closed. Isn’t this the most amazing animal you have ever seen? They are known to be very shy and so we were again really blessed by having this one come right up to us.

Nice for the girls to get to see porcupines too. They know the stories of our dogs getting attacked by porcupines and so it’s nice to put a visual picture to the story. 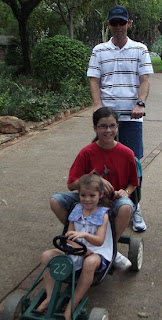 Even Rachel managed to get a ride (downhill) and give her feet a break.

Thankfully Hezekiah had a nice sleep in the pram. 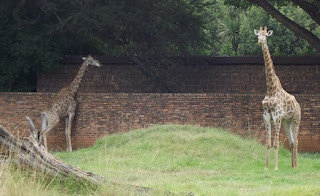 It was nice that the giraffe where out when we passed them on our way down. I had seen them when I fed Hezekiah earlier but the others had missed them (they have a huge “house” that they can go into and perhaps got fed earlier). 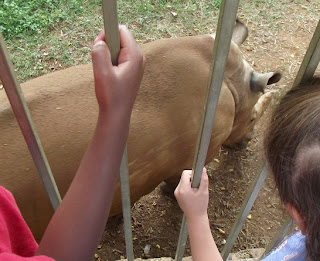 This rhino was really sociable – or perhaps liked the smell of one of us. We had spotted him behind his gate on the far side of the enclosure and Rachel was so close to him she could have touched his horn. When we got around to this side he came walking right up to us and followed us along as we walked. On this side the viewing area is raised – so no touching – but lovely to see it so close.
Posted by Buckland at 9:02 PM