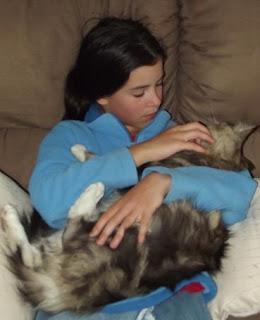 What a relief to get a call from the lady at our old place to say that Tiger is there. Brendon went past yesterday on his way home from work - wondering if he had made his way back. So Brendon picked him up on the way home from work this morning. I was so pleased to see him. He was wet and hungry when he got here - but he is home. Thank you Lord!
Later in the day (once he had filled his tummy and dried off) he wanted a cuddle and got a nice one from Rachel. I have often heard of cats making their way back to old houses but it's the first time I have seen it for myself. And it was over 5km that he traveled. I wonder if he was perhaps missing Rachel and thought she might have been left at the old house. Hopefully with her home now he will settle properly here. We are getting a cat flap put in on Wednesday and I am sure that will also help.

Brendon and I put the last of the lace curtains up today. We really did feel quite exposed without them even though there is not all that much traffic on the road. I suppose that's what comes from living with no neighbours for over 8 years.
Rachel took this photo and realized she needed to force the flash. Well - it would not work. I got so upset - thinking my camera was broken with less than two weeks till our overseas trip. Thankfully I had a look later and saw that the function button had been bumped. Once I had that back to it's normal setting the flash worked fine. What a relief. I think I have really had enough of camera's breaking in the last 4 years. 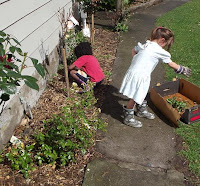 We had quite a lot of rain in the morning but then the sky cleared and we had beautiful sunshine. It was lovely out and the girls even helped get some weeding done. 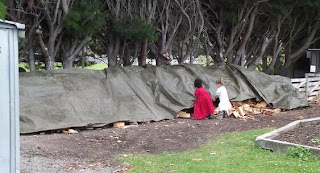 Later we heard thunder and saw huge black clouds heading our way - so we quickly put the tarp on the wood (which we wished we had done yesterday). This had been an extra item on my list of things done last week as I helped Brendon offload 3 of the 5 loads. So perhaps these things are all adding up to my tiredness. I must add though that Brendon does keep telling me to take it easy.

It's been a bit like watching a one day cricket match though. I started off with 40 boxes to unpack (some were not numbered and on my list) and only 20 days till our SA trip. I got it down to 19 boxes and 15 days but finally today I got it down to just 7 boxes and 12 days. There is definitely a psychological advantage when it's less than 1 a day. I won't drag it out but at least I know I am close to done now.
Posted by Buckland at 9:00 PM