Dogs, cats and a TV 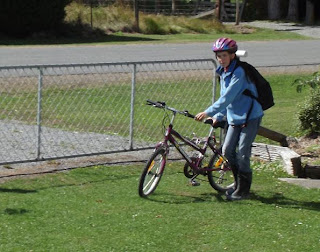 Monday: Rachel loves the idea of riding to the POBox to fetch the post. It's a shorter trip than our old driveway. The big difference now is that she must wear her helmet. Ruth wanted to ride with her but I need Brendon to check on Ruth's riding ability before I allow her on the road. It will be much easier to ride on a lovely road compared to our bumpy old driveway - but with the trucks that can come down the road I am not going to take any chances.

Our one neighbours children came over with some cookies today (and a friendly "Welcome to the neighbourhood). They breed dogs - so it was quite appropriate to get dog biscuit shaped cookies. :-) I just managed to get a photo before they were finished. They were lovely shortbread cookies. 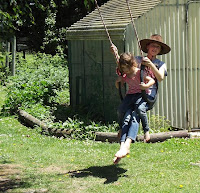 Tuesday: Never too big for a swing. I am a little nervous with both of them on there but Hannah really enjoys swinging with Rachel. You can see all the weeding that is needed in the vegetable garden behind them on the left. 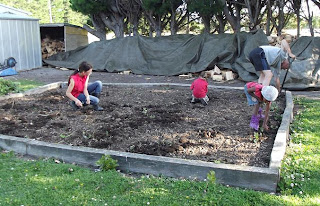 We got started on the other veggie patch today as there were not too many weeds and some potatoes. 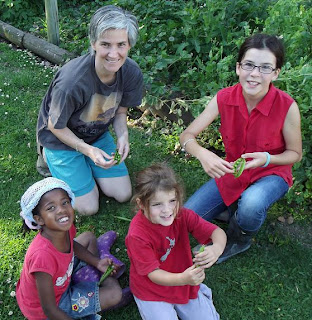 As a reward for getting that all done the girls got to eat some fresh peas. Ruth does not like peas but did not mind a few fresh ones.
Wednesday: Dug up some more potatoes - enough for dinner - and Rachel made sausages and cooked up all the different sized potatoes. They also picked some more peas and had fresh peas with their meal. Rachel was thrilled to have a meal that was almost totally"home grown". She said Dad helped grow the pig for the sausages - so that counts too. ;-) 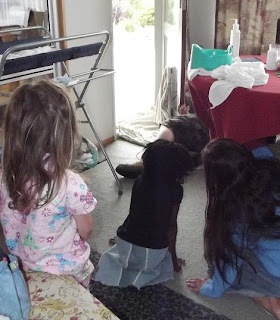 We also had the cat flap installed today. The girls enjoyed watching how it was done.

And as soon as it was done Hannah had a closer look. I watched her see if she could get her head through. I am glad she can't. When she saw me watching her she had such a cute smile. The cat flap looks nice though. Hopefully the cats don't take too long to learn to use it. 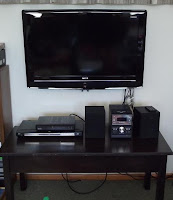 In the afternoon our project was the TV. After setting the TV up here on the Saturday after moving in we decided that we liked it in that spot and at that height. So we have moved the TV cabinet into Rachel and Ruth's room and mounted the TV onto the wall (the bracket was one of our shopping items last Friday). This is much safer too and Brendon said insurance companies are not paying out for damaged TV's due to earthquakes anymore - so it's good to have it safely bolted on. We had to move the aerial though and the cables that I ordered arrived today. That meant Brendon had to get under the floor again (which is NOT fun) but it was good to get it all set up. Now the free view decoder, DVD player and hifi can sit on the bench and not on the floor. Unfortunately since the move the hifi is not working. Brendon took it to a friend to have a look and he said when he set it up at home it worked perfectly. He returned it to us and it won't work at all. So very frustrating.
The laptop also played up today and the girls could not do their on-line math. I tried to fix it on my own and then ended up spending almost an hour on the phone with three different companies - one call went to India and the other two to the Philippines. I was so glad when I finally had it working again (and so were the girls). I am also having trouble with my home computer not starting up properly and Brendon's ride on won't start either.
Thursday: Today Brendon managed to borrowed a ride on from the farm and I cut the grass for him so that he could sit with his foot up. He has a nasty bite on his foot and it is really swollen.
I cut his hair for him yesterday and went to get my hair cut today. The lady felt so bad about my last appointment not happening (my name had been rubbed out but no one had cancelled it with me) that she did not charge me for the cut today - so that was nice. 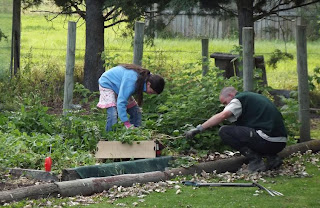 I finally got the one side of the garage cleared today and so we could try and see if our van would fit. It is just too high. The garage doors are really old though - so we will have to look at re-doing the doors completely.
Friday: Only a week before our SA trip. Brendon really wants to get the weeding done before we go as we don't want to come back to a jungle. Rachel has been helping. Once I had fed Hezekiah (and taken this photo) I headed out to help too (from 7:30 to 8:30). Hezekiah was happy to sit in a stroller and listen to the doves while we worked. We got so much cleared which was great.
I have also finally gotten back to tightening Ruth's hair. So hopefully I will have that all done before we leave too.
Posted by Buckland at 9:00 PM