Boxes out and bags in 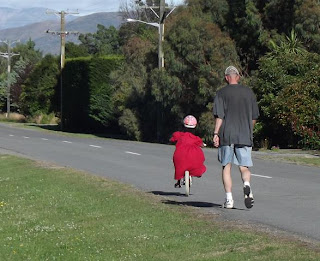 Brendon's foot was much better yesterday and so he walked down to the shops to get a couple of things I needed. Ruth asked if she could ride with so that Dad could check her riding skills. He was happy with her riding but told her to stop and look behind her before crossing at the shops as she has not practiced looking back while riding. Later in the day he saw her practicing looking behind while driving around the garden. She is a very determined little girl.
Hezekiah has been feeding again at around 3 or 4am since we moved. I was not sure if my milk supply had been effected by all the extra stress - so I wanted to make sure he was getting enough and fed him when he woke. On Thursday though I decided to help him stretch to a 3 hours routine. He had started to not look very hungry when he woke for a feed after 2 1/2 hours and although I had to hold him a couple of times to get him to the 3 hours, he quickly settled into the new routine himself. My goal in this was to make sure he was drinking really well at each feed so that he could start going through the night again. I was really missing those 8 to 9 hours. I thank the Lord that he has gotten back to that so quickly. The first couple of nights he woke at 3 or 4am but I was able to get him back to sleep without feeding him - so I felt improvement had already been made. (On Sunday night he slept through.) 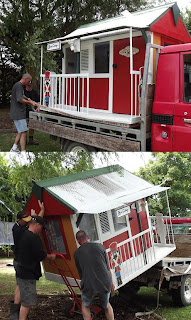 Brendon and Rachel headed into town by 10:30 to collect a play house we had bought for the younger girls. The sellers (and a friend in town) helped load it and 2 neighbours who work with Brendon helped off load it this side. 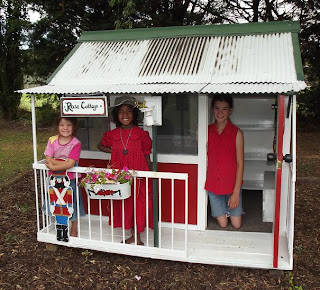 The girls were thrilled. Rachel knows she is too big to play here often - but she has already been invited for tea. I know they are going to spend many happy hours playing out here. 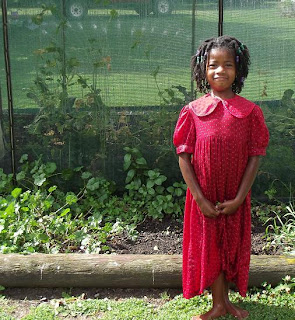 I got some more weeding done in the morning (Brendon, Rachel and I got loads done the previous evening) and in the afternoon we put the sprinkler in the hot house to get that nice and soft so we can weed in there. Ruth decided to have some "water fun" and would stand over the sprinkler - completely soaking herself.
I have finally gotten back to working on her hair again and am now sure we will get it all tightened before we leave for SA.

Here is a shot of Ruth's new tooth - coming up in the correct place in her mouth (her baby teeth had been pushed forward from all her dummy sucking at night in her first 4 years). The baby tooth is loose and we are hoping will come out on it's own (and not need to be pulled). We keep saying how funny it will be if it comes out at the airport on Friday. Rachel lost a tooth at the airport when we left SA.

Brendon and I got boxes down on most of the veggie garden yesterday. We don't have straw to put on top yet - so had to use wood just to stop them from blowing away. This is so that we don't come back to a jungle as it controls the weeds so well. 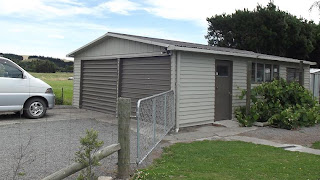 We had a very full afternoon as we also had a local builder pop around to chat about our garage. I had finally cleared the one side of the garage to find that our car does NOT fit through the doorway (only just). We chatted about options and he asked if we would like it done while we are away. If that could happen it would be wonderful. So here is the before photo. 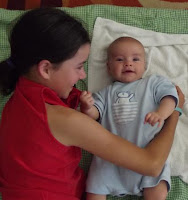 While we chatted to him Rachel was playing with Hezekiah. He would grab her top and roll himself over towards her. They played so nicely together. 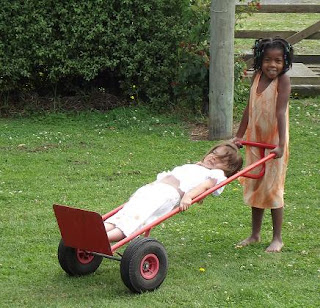 With things possibly happening in the garage while we are away we needed to move things around (getting the sides of the garage clear). So Brendon brought all the book boxes in and piled them behind the couch (this trolley we are borrowing from Alby has been a great help). These boxes will be unpacked once our book shelf has been made.

My goal today however was to get all the other boxes unpacked. I had done all the nicely marked, packed and recorded boxes but still had 5 boxes of hastily packed things that were really horrible to do. I knew that sorting was needed and so had been putting it off - with the boxes lining the passage wall. I finally got them done today and so the boxes have officially been replaced by luggage bags - which are now lining the passage wall. We got so many things marked off our "to do list" today which was great. The only negative is that Rachel and Ruth have had runny noses this week and Brendon started feeling sick today. So he is taking flu tablets and we are hoping we can all be well for our flight on Friday. Wow - I can't believe we only have 4 days left before we fly.
Posted by Buckland at 9:00 PM