Of helpers and hats 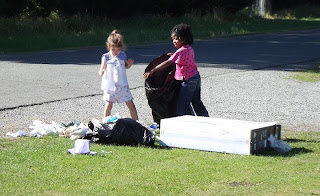 Tuesday: Rubbish collection today and we were warned by Alby that there is a dog that likes ripping up the bags - so don't put it out the night before but rather in the morning. So Brendon took it out on his way to work at 5:30. This was obviously way too early as the dog got to it anyway. My wonderful girls put it all in a new bag and even took turns holding and packing. It's so nice to have our rubbish collected though. It's been over 8 years of us having to get rid of our own rubbish. We just have to get used to having neighbourhood dogs roaming the streets. 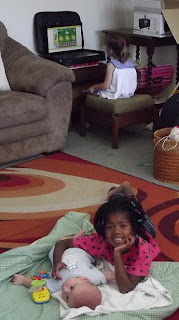 It was good to get the laptop set up for the girls. There are only a few toys available and so it's nice for Hannah especially to have something different to do.
Swimming lessons have been terrible this week with Hannah. She has cried non-stop every time. It has been so frustrating. I am thankful that she has done what has been asked of her - she just cries while doing it. :( I have tried to encourage her and I have reassured her numerous times that no one is going to put her head under the water and she only needs to do what she is comfortable with doing. The poor child just seems terrified.

On Wednesday the Spencer family came for lunch after swimming lessons which was great. We had a lovely picnic lunch under one of the big trees in our garden which was fun. 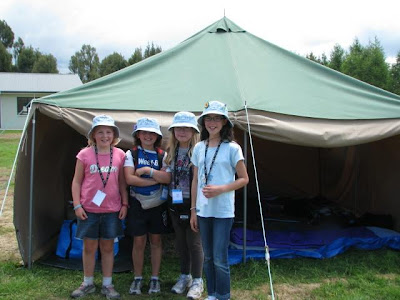 I also got this photo of Rachel (sent to me from a friend of a friend who visited them). All looking so happy. I was surprised to see how tall Rachel is compared to the other girls. :-) Facebook is great and through that I found out about a live camera that was set up at Jamboree and at any time I could have a look what their weather was like. They even saved 4 photos from each day (morning, noon, afternoon and evening) and so I could look back over the previous days too. It was nice to see that it had not been raining and I think the bit of cloud each day would have helped it not to be too hot.

I had a look at the GGNZ facebook page and found this photo too. What a lovely one of their opening ceremony. Now we know why a "sun hat" was not on the packing list. They all got one in their group colour. What an experience with almost 3,000 people at Jamboree. 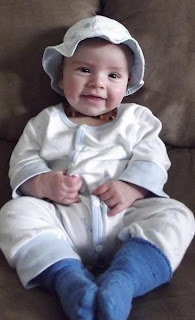 Thursday was freezing for us with such a cold wind blowing. Hezekiah was kitted out with hat and socks for our trip to the swimming pool. When I arrived Kerry said "he looks like a flower". I thought Brendon would not be pleased to hear his son described like that but when I showed him the hat on he said the exact same thing. ;-) At least the hat has blue and green on it and the pictures are of bugs.

We got our first Courier delivery today - a gift from the estate agent. Brendon had wondered about it - thinking we would probably get something and he was right. It gave us some nice snacks for our trip into town on Friday.

On Wednesday afternoon Brendon and Ruth went into town to pick up the new bunk bed we had ordered. While they were out Hannah and I chatted to Grandpa and Nana on Skype (our regular Wednesday chat) and I enjoyed the technology that is now at my fingertips as I took the laptop and walked them around the house and around the garden. 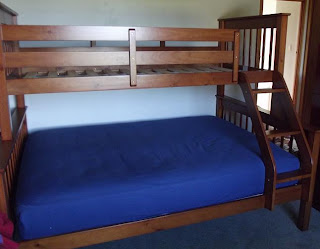 I had done so much unpacking on Tuesday and Wednesday that I decided to have a break from that on Thursday and surprise Brendon by having the bed made. I managed to get all the frame pieces put together (all the darker pieces) but as Brendon was home by 3 and I had the swimming lessons to go to in the morning - I ran out of time. He was thrilled with what was already done and he then put all the slats in and it was all done before 5. There were 50 pieces of wood - so not a small task. It was great to then have the evening off and we enjoyed watching "Defiance" once the girls were in bed.
Posted by Buckland at 9:00 PM