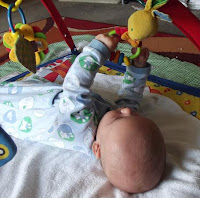 Sunday: Hezekiah is getting really good at grabbing his toys. He loves this rabbit as did the girls.

Unfortunately Hannah was still feeling sick today. No fever - just a sore tummy so she is not eating much at all. She played some computer games in the morning and then had a nap on the couch. Brendon worked till lunch time and then we all watched Cars 2 together in the afternoon. 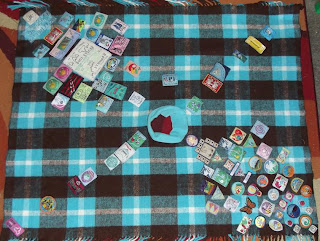 My goal for Sunday was to get Rachel's campfire blanket finished. I had over 70 patches and badges to sew on and it took ages to do. I am glad it's done. Top left are all her Brownie patches. Bottom right are all her Brownie badges (ones she has earned and which she wore on her sash). The diagonal lines are the swap patches that she has gotten over the years. I think it will look lovely when she wears it and I think all the badges make it warmer too. ;-)
﻿
﻿

Monday: Although Brendon worked this morning he was done after 3 hours and home just after 9am which was lovely. We were off by 10:30 though to take Hannah to the doctor. It was day 3 of her having a sore tummy and not eating anything. Just as we got to the end of our driveway she vomited. So we turned around, cleaned everything up and headed off again. The receptionist gave her some water which she then vomited up a few minutes later.
﻿
﻿﻿ ﻿The doc is sure it is just a tummy bug and we were thankful that was the end of the vomiting for the day. She continued to have a sore tummy through the day and just nibbled on coco pops and sipped on water.

Thankfully Brendon and I did manage to get some packing done in the afternoon which was great. 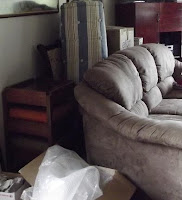 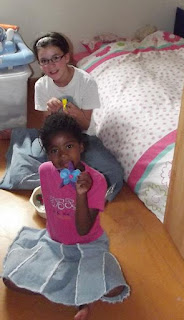 Tuesday: Another day on the couch for Hannah. At least she did manage to eat a little bit more today and she has not vomited again. But poor thing.
Brendon and I manged to get quite a bit packed too. We are now storing boxes in the lounge as well. We are also clearing Rachel's room so that the lady moving in here is able to start bringing boxes during the week before we move. So Rachel's bed has now moved into the library (with boxes and empty bookshelves filling the other side of the room). She was so excited about "sleeping upstairs" though. Ruth and her did some sewing this afternoon and chose to work in "Rachel's room".
Hezekiah didn't have a great day again today so we will have to do the 3 month photos tomorrow. Perhaps Hannah will be feeling better and we can get an updated photo with all 4 of them.
Posted by Buckland at 7:00 PM