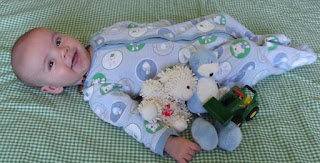 Wow - three months already. And as hoped - his colic has cleared. He is already struggling with the first bottom teeth though - poor chap. Thankfully they are not keeping him up at night and he has settled into going 9 hours at night now which is wonderful (having dropped the 3 or 4am feed). 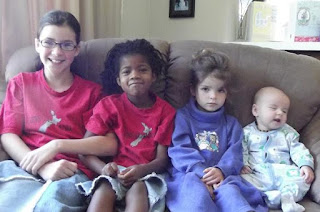 6.4kg and 65cm. So he is keeping up with being top of the charts in his height and following the curve nicely with his weight too. Crazy that he is already wearing clothes that are 6-12 months.
The children's monthly photo was not any better this morning than it would have been yesterday. This was the 5th morning of having Hannah feeling unwell. I like this photo though as it captures a bit of Ruth that you don't always see in photos - that silliness that gets Rachel giggling. Hezekiah looks likes he's saying "not the camera again!!!" :-)

This one's cute as it looks like Hannah and Hezekiah are chatting about something serious. 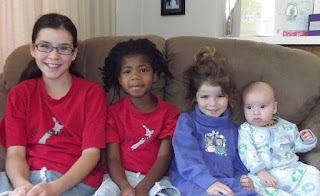 And another one. Even getting a smile from Hannah. Just before lunch time Hannah seemed to instantly "come right". She finished the porridge that she had asked for and only nibbled at earlier and started talking and walking around. It was incredible to see. I realized how quiet she had been over the last 4 days. It was also amazing to have her ask me a few times in the afternoon - "what can I clean?" So I had to find little jobs for her to do. Eventually we got her into a cooler dress and Rachel was thrilled to have the 3rd actor back so that they could have the full cast for practice.
Unfortunately when Brendon got home he was not well. His stomach was sore and he was just exhausted. He has been tired the whole week - so perhaps he has been fighting the same bugs as her. So one up :) but another one down. :(
Posted by Buckland at 10:01 PM