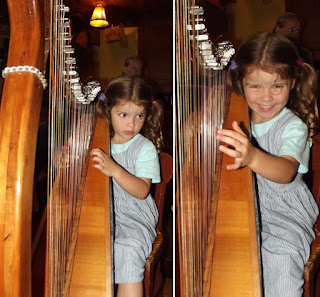 On Thursday evening we had dinner with new friends. Rachel was thrilled with the kittens they had and Hannah had a great time on the oldest daughter's harp. First photo - concentrating really hard. Second photo - smile for the camera. It was interesting to watch her play on it when it first came out. Then the daughter played a few songs for us and gave Hannah another turn. Well the sounds she then got out where really lovely. She obviously saw how to pluck the strings individually and did a good job of it. Such a beautiful instrument and one I always thought would be wonderful to play. I don't suppose anyone has a hard they would like us to baby sit for them. ;-) 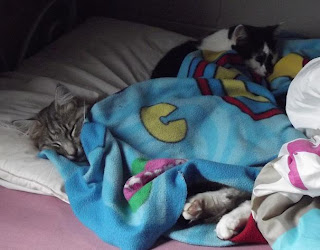 Hannah has really enjoyed having the cats sleep on her bed lately. We have noticed that if she has one of them on her bed when she goes to bed at night she is quieter (and does not bother Ruth as much) and gets to sleep quicker. I found the cats like this the one morning. She had tucked them up nicely.
We have been keeping Patches in at night since her attack. We are hoping to put a cat flap in at the new house. One of the small benefits of owning your own place. 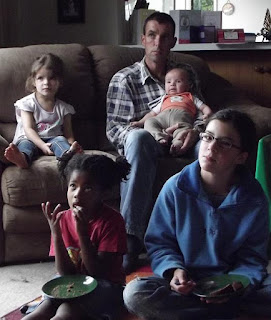 We did not have any major plans for Saturday as Brendon worked till lunch time. Hannah was also not feeling well and hardly ate anything through the day. In the afternoon they all watched a movie together. Even Hezekiah enjoys watching the TV. 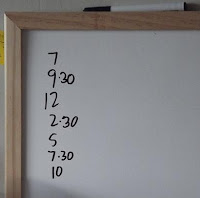 And Hezekiah has settled into a wonderfully predictable routine. There are odd days when things differ slightly - but on the whole it follows this pattern. It's a first for me to have a predictable day and it's rather nice. The feed that is not on the "schedule" is the early morning one. He normally feeds between 3 and 4am but has had a few stretches till 5 or 6. Hopefully it won't be too long before he drops that one all together.
Posted by Buckland at 9:00 PM