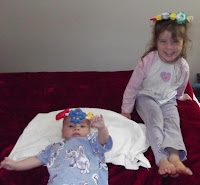 On Sunday after lunch Brendon decided to sort through his cupboard and take out all the clothes that he will not wear again. Thankfully he still fits in the suit he was married in - not bad for almost 15 years later. Ok - he had to wear a belt back then.... hehe. He had a 2nd suit though that he knows he will never wear again as well as a couple of jackets. So while we were busy Hezekiah lay on our bed. Hannah decided she would play with him. She was a princess and he was a prince. So sweet. 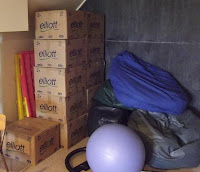 Rachel, Hezekiah and I headed off to the toy library for an hour in the evening to help with some year end cleaning. Hezekiah was due for a feed during that time - so he had to come with and I did some card sorting with my free hand while he fed. When we got home Brendon had packed another 5 boxes. 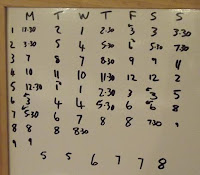 Hezekiah has had a lovely pattern of night sleep this week. He generally gets at least 5 hours in a row but worked it up to 8 hours on Saturday night. He was back to 5 on Sunday night - so I know he has not settled into a predictable pattern yet. He is only 9 weeks old though - so he is doing really well. 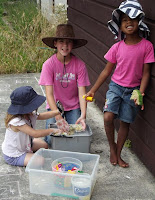 I got the girls helping with some sorting today. I got them to clean all their play dough toys. They had a fun time with that. Especially Hannah. She just loves playing with water. 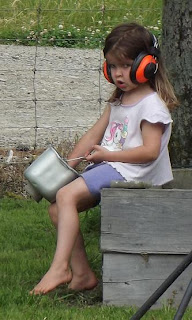 The lady who is moving into this house when we move out organized for someone to come and clear out the overgrown veggie patch. His weed eater and rotary hoe were far to loud for Hannah though (who wanted to watch what he was doing when he first arrived) and so she got Dad's ear muffs.

She enjoyed having them on so kept them on when she went to play in the sand pit. Such a funny wee thing.
Posted by Buckland at 9:00 PM