Today the Play Centre had it's Christmas Party. The details were to bring a $5 present for each child. We then found out that a "Father Christmas" would be handing out the presents. And what a way to arrive. :-) 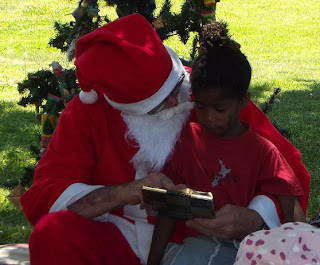 Ruth had come up with the idea of her choosing Hannah's present and Hannah choosing hers. We bought them when we were in Kaipoi for the Ballet concert - and the girls wrapped them for each other too. So when Ruth's present came out the bag Hannah immediately said "That's Ruth's." And she knew hers was from Ruth and not Santa - but it was all very exciting for her none the less. 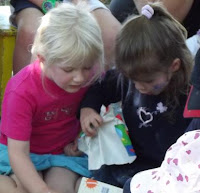 She was thrilled to find that Ruth had chosen a phone for her. She had been quite upset at the shop when she chose a phone for Ruth but then wanted one for herself too. She also got some Dora bouncy balls which she thinks are "really cool". She was also very happy that Katy was at the party. They play so nicely together.
Rachel played her Carol music again and again the background noise is just too loud. The Play Centre teacher told me afterwards that she got many lovely comments about her playing and that Father Christmas was especially impressed.

It was an incredibly hot day though and so after dinner we headed down to the pool to cool off. 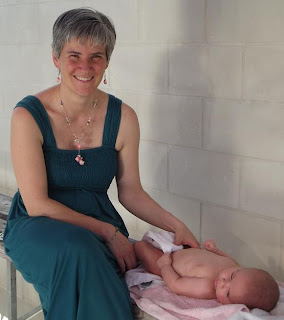 Hezekiah was also so hot - so he enjoyed some time with nothing on to help him cool off. He was NOT interested in the cold water (cold compared to his bath) and screamed when I put his feet in. The water was a lovely 26 though and the rest of the family really enjoyed it. For most of the time we were the only people at the pool - so I was on duty with Hezekiah. Brendon offered to swap but it was  too late. We only got home at 7:30pm and it was still 26 degrees outside.
Please notice my jewelry. I decided to buy two sets and I think I might be able to get used to wearing dangly earrings.
Posted by Buckland at 9:00 PM