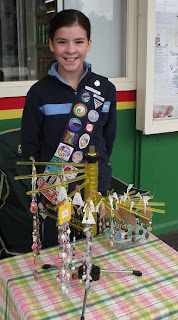 Our friend who gave Rachel the earrings to sell for Jamboree fundraising sent us two boxes full of beads and things. She was doing a clean out in her craft room and we feel so blessed with all that she sent. She also sent some necklace and earring sets  so Rachel spent 3 hours outside the 4 square this morning doing some selling (and chatting). She did really well and sold around $75 worth. She also chatted to a few locals and everyone seems to know we will be moving into Hawarden. She even met a new neighbour who has horses. The lady told Rachel she could possibly get to have some lessons with her. You can imagine how excited Rachel was about all this. It's funny that we will be moving into the village but will end up having horses around us.

While Rachel was out the younger girls watched this Bible movie. It starts with creation and goes up to Abraham's offering Issac. It was wonderful to get to reinforce the stories we have been talking with our Jesse Tree. Hannah was really impacted by the last part - when Abraham has to offer Issac. She knew Abraham would be told "NO - don't kill Issac" but she was crying when Abraham put Issac on the wood. It really helped her to understand that the ram took Issac's place. Afterwards Ruth said "ok - so Issac is like us and the ram is like Jesus." It was wonderful to know that she has really understood what this story (and the whole idea of the Jesse tree) is about. 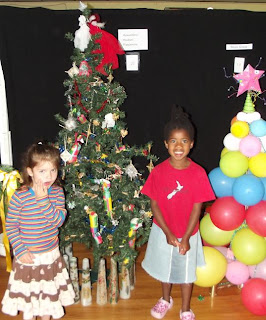 I was especially glad to have such a Christ focused morning as we were off to the local Christmas tree festival in the afternoon. The girls were pleased to see the Play Centre tree that they helped decorate. Sarah's one for the Music group was next to it - what a clever idea with the balloons.
Perhaps next year we can use all of this year's paper plate decorations and put up a Jesse Tree again. 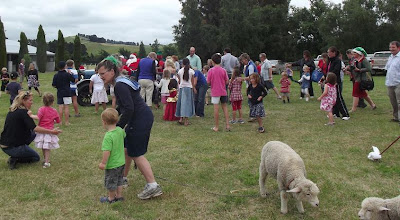 A highlight for the children was when "Father Christmas" came. Even though Hannah knows it's just a man dressed up - it was still loads of fun for her. Again my girls did not do well at the lolly scramble (something I am glad they are not good at). Rachel took them over to Santa's helper and she made sure at least all the children did get a lolly or two.
Another big reason for being at the festival was that Rachel got an opportunity to play the Christmas Carol Medley on her violin. Sarah organized for all her singing pupils to sing through the afternoon and it was lovely that she thought to invite Rachel to play too. The video is not great as I was too far away and the noise from outside the tent was quite load (I only realized this when I watched the video at home). She did really well though. This is just a section of the song to give you a bit of an idea. The violin teacher said she did really well. Rachel has not had any lessons this year (only the few she had over a year ago) and so she has done really well to teach herself this peace. Perhaps once we have moved into Hawarden it will be easier to organize lessons for her as she will be able to just walk up to the school.
Posted by Buckland at 9:00 PM

Well done Rachel, that is lovely violin playing and really amazing to have worked on it yourself!!