Of milk, tummies and potties 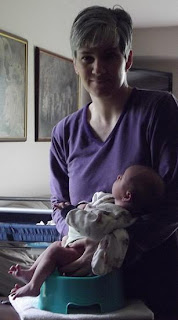 Some things I forgot to write about yesterday was that I could already hear Hezekiah gulping as he nursed. Even when Maureen visited she said she heard "frequent swallows". So he put in his order for milk that first night and it's already on it's way.
Another note Maureen made yesterday was that Hezekiah "Christened Belinda!! Probably won't be the last time." All mothers of boys know what this is about (and many others of you can guess from the common baby boy nappy changing videos on AFV).
So even though this photo was taken on the 20th it does fit here as I put him on the potty when he was just 1 day old. I had potty trained both Ruth and Hannah as babies and was a little unsure about how it would work with a boy. I did not start this early with Hannah (she was at least a week or two old) but decided that if he was going to wee (or pee as they say in NZ) when his nappy was taken off then he may as well do it on the potty. The main difference was that I used a little bowl for Hannah at first where with Hezekiah I needed to go straight to this potty (with it's higher front bit).
Note: At the time this photo was taken (just over 2 weeks old) Hezekiah was already really good about using the potty. It was even easy to tell when he was finished his poos as he would only then do a wee. 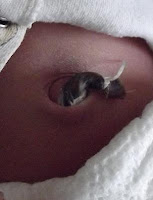 I took a photo of his cord today (already getting nice and dry). Before the birth the girls had asked about it and I could not find any photos of their cords in that first week. So just for the record - this is what it looks like as it dries out.
Last night Hezekiah settled at about 10pm and slept till 5am. The only problem was that I did not sleep well at all. I lay awake listening to his breathing and worrying if he was ok. There were times when his breathing was so incredibly rapid that I got quite frightened. Eventually I asked Brendon to get his watch so that I could count his breaths in a minute. This was a good thing as it made me realize that it was not all the time. It did fluctuate quite a bit and Maureen had told me about this too.
The negative today was that Hezekiah was starting to look quite jaundiced - all the way from his tummy up. Even the whites of his eyes were yellow. It was far worse than what the girls had. After chatting with my mother a few days later I learnt that my brothers struggled with jaundice far more than us 3 girls. So perhaps that pattern will be the same with my children.
Again Maureen was such a blessing - giving me all the encouragement that I needed through this. It's hard to deal with a problem (even if it's small) when the emotions are doing their thing with the milk coming in. And boy did I have a day of it today. Eventually I had a slight fever and had been shivering with cold. I called Maureen and she reassured me that it could all just be with my milk "coming in". Brendon had helped me to check and make sure there were no blocked ducts causing infection (that had happened with Rachel). Maureen suggested I have a nice hot shower and really massage the breasts and get some of the milk out. Well - I must have had the longest shower I have ever had. I was in there for ages. I did feel so much better afterwards though. This little boy did put in a big order for milk and has now gotten all sleepy with the jaundice. I do know though that this too will pass.
Posted by Buckland at 9:00 PM