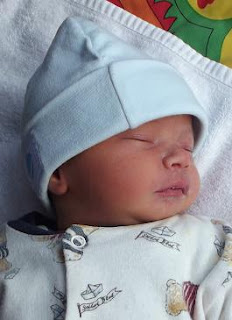 It's been a bit wet and chilly this week which makes it really hard when your little man needs sun for his jaundice. Thankfully it was already looking less intense today and even his urine is becoming more dilute. It's hard when the jaundice causes baby to be so sleepy and so does not really want to drink all that much but the milk is exactly what will help him. 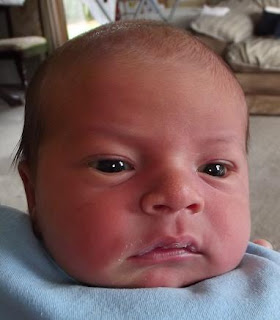 At least he was awake long enough for me to get a photo of him with his eyes open.
His eyes are really dark which surprised me. I am so used to European babies having blue eyes but his are brown right from the start. 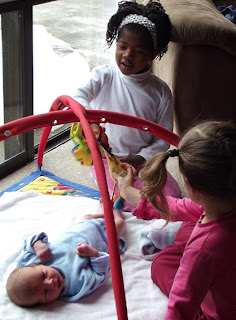 Thankfully later in the morning the sun did make an appearance and so he could at least get his little legs into the sun. The girls enjoy talking to him and showing him all the different toys. We had to limit the number of toys they hung up to 2 for now - otherwise this poor little man will be quite overwhelmed. I have already seen Hezekiah fixing his gaze on me and "tracking" as I move from side to side. It's just amazing to watch them grow and learn. 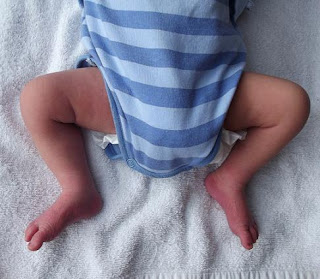 Little froggy legs. I think he spent a lot of time like this in the womb too as I often felt a leg on either side of my tummy.
I bought some cheap disposable nappies for this first week. No one wants to clean cloth nappies with meconium on them! And the disposables are easy enough to keep off his belly button too. So once the cord is off he will move into his cloth nappies
I was feeling much better today physically and emotionally. It was a rough day yesterday but once I realized that it was just the roller coaster of emotions that goes with the milk coming in - it helped me to just go with it (ie not worry about just crying for nothing) and know that things would be better soon. I was glad it was only the one day and I felt myself again today.
I had to smile at the irony of things last night as my breasts were so full though. For the last few months of the pregnancy I could not sleep on my back (not wanting to cause any circulation problems) and last night I was pinned to my back as it was just too painful to be on my side. This too will pass though. :-)
Posted by Buckland at 9:00 PM