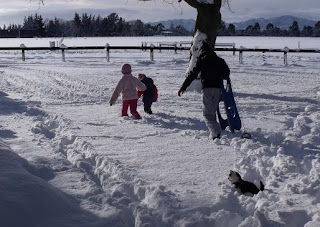 By 9:15 the girls were wrapped up and out the door. They just loved walking through the thick snow. Rachel wanted to see if she could pull Hannah on the sled but it was just too thick. 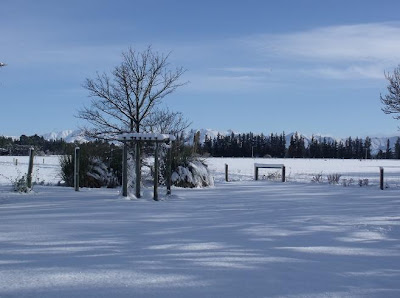 At least the sun was shining wonderfully while there were out there. It was just so beautiful. And to finally have enough snow to even cover the longer grass on the fields around the house. 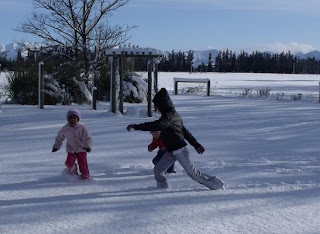 So much fun. As Rachel's boots were not even long enough to be above the snow we knew the Ruth's would be totally covered. So we put their pants on the outside of the boots to stop at least some of the snow getting into the boots. 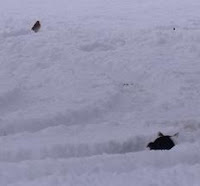 Patches found the car tracks quite helpful - she could hide from the birds and get quite close. Whenever it snows there seems to be so many birds under this big tree in the drive. So Patches had a lovely time hunting today.

This is a photo I took in July but did not put on the blog. Just to give you an idea of how many birds enjoy this area. Quite a few had even flown off before I took the photo. It's been the same every time it's snowed. 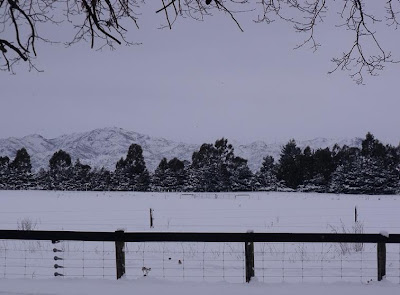 And I just love this one with the mountains and trees.
After lunch I went outside to get some fresh snow to make the girls
Slush Puppies. 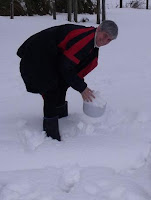 They thought there snow drinks were wonderful. Thankfully Brendon was home a little earlier than usual. By 4:30 we were all out - ready to make a HUGE snow ball (Brendon brought his work boots home so that I could wear his home ones). First I planned a family photo (thanks to the tripod in the lounge).
And then we got rolling. When it was done (we could not move it one more inch as it was SO heavy) I headed back to the house to get my camera. When I got back they were having a game of snow soccer. :-) 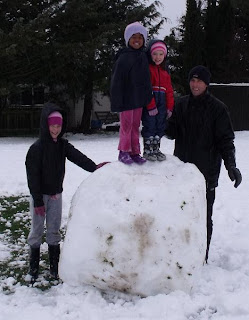 Then it was time to pose with our snow ball - probably better named "snow boulder" as it was so big. 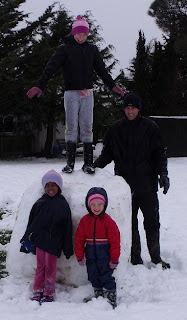 We got it almost as tall as Ruth. It would be interesting to know how much it weighed. 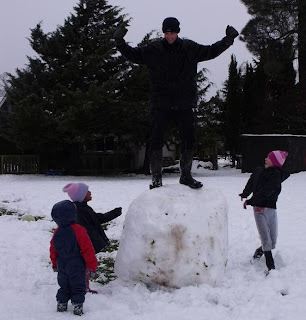 Dad too. You can just see the bit of a green path from were we zigzagged down the lawn. If only we had one or two extra men at hand - we could have created a monster one.
I was just about to have my turn on top but as Brendon was going to take the camera I saw how wet his gloves were. Rather not. I had been wearing his extra pair of gloves over mine - so I could take the outer ones off and still have dry warm hands.

Quickly getting some snow angels done before we head inside. 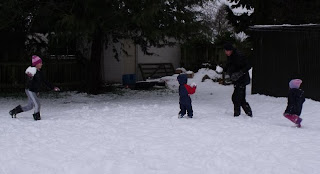 And this seems to be the tradition as everyone starts to head home - a last minute snow ball fight. I tucked my camera inside my jacket and got involved too. The frustrating thing for Rachel and I though was that he caught almost every ball we threw at him. It must be all that childhood training as a goalkeeper in soccer! We had no chance. Thankfully he let Ruth get closer - so she managed to get a few to land on him. 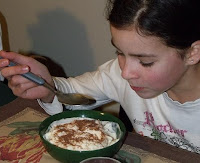 After dinner I asked Rachel to go out and get some fresh snow. The girls were SO excited about eating home made snow cream. :-) Brendon had bought some cream on the way home. I added some sugar and vanilla and then snow (a cup at a time). We sprinkled some milo on the top and it was enjoyed by all. It was FREEZING cold though.
Another wonderful day. Thank you Lord.
Posted by Buckland at 8:59 PM