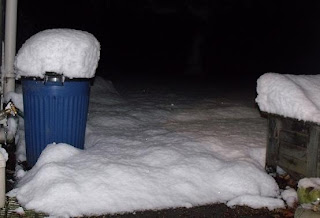 I did not sleep wonderfully well last night. The only benefits to being up often is keeping the fire going through the night but more special was the stunning moonlit garden I got to enjoy at midnight. A clear sky, bright moon and a garden loaded with snow. Just spectacular.
And then by 5am I was wide awake and knew I would not get back to sleep. So I got up. Just before 6 I took this photo outside the back door (using a flash) to show you just how much snow has fallen. A good 30cm. 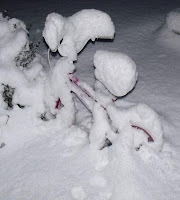 Hannah's bike on the patio was well covered too. 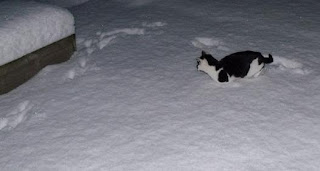 Just before 7 Patches clearly wanted to go out and play in the snow again. Normally the snow does not build up on the patio much as it's just too warm. But here she is in thick snow on the patio. She had so much fun jumping around in it. So cute to watch. 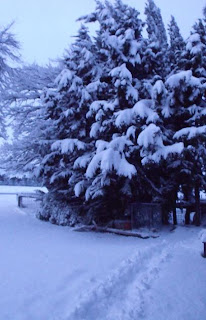 You can see the path Brendon has made to get to the woodshed and how much snow has collected on the trees.

So much snow has fallen. That lump to the right is Hannah's motorbike (lying on it's side).

The snow had also started to pack up against the window which the girls thought was "so cool". 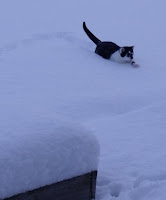 By 7:30 Patches wanted to go out again and this time she ventured off the patio. It was so funny to watch her. She quickly decided it was just too deep and so made a quick turn and waded back to the patio. 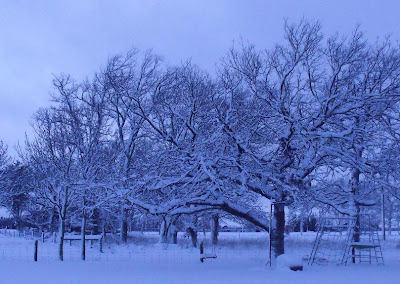 I then decided to head outside to get some photos. Brendon was waiting to hear about getting a lift to work - he normally leaves at 7 and I am generally only getting out of bed by now. So it was nice to be up and about.
The trees just look so stunning all laden in snow - even with the early morning blue tint that photos have before the sun is up. 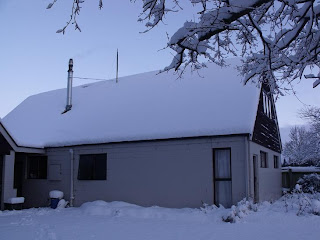 It was nice to finally see the house for myself - all covered in snow. Quite something with the fact that our roof is so incredibly steep. 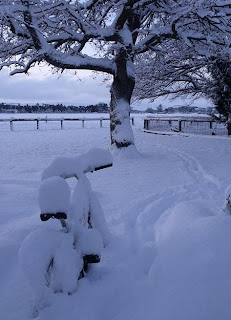 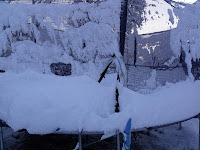 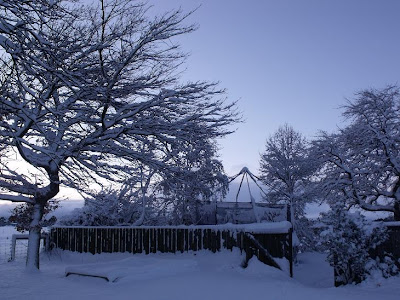 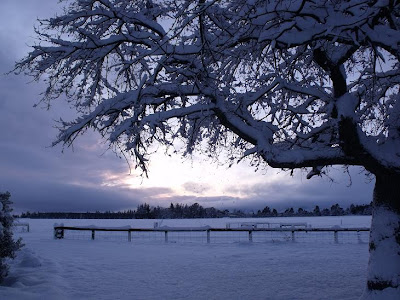 And this is probably my favourite photo from this morning. 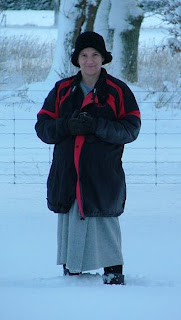 Brendon also managed to get a shot of me with my old camera. You can see my boots are covered. I had to shake the snow off my socks before I came inside. 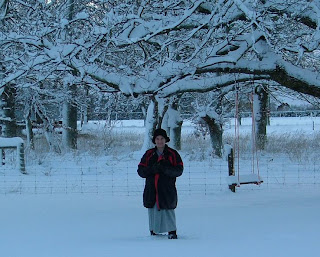 Such a treat to have so much snow. 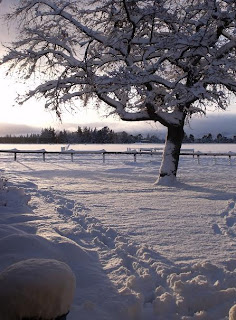 By 8 the sun was shining brightly and things were beautiful in a different way. 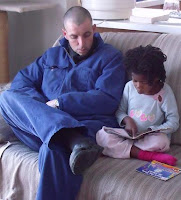 The tap was obviously dripping a bit last night.
Brendon waiting for his lift to arrive. There was no way his little ute would manage through all that snow. So Ruth took the opportunity to read to him for a while. 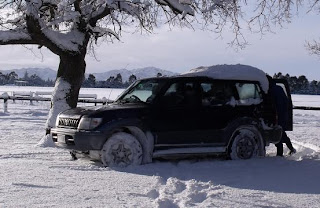 His lift arrived just before 9. Steve had gone and picked up quite a few people from Waikari and Hawarden.
The snow is really beautiful and enjoyable for the children but I do feel sorry for all the farmers who have to be out there working.
Posted by Buckland at 9:00 PM