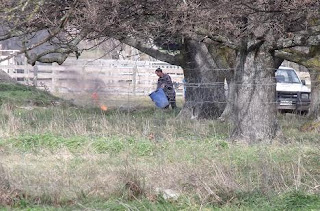 This week's Fly Lady zone was the entrance and wonderfully Brendon took this to include the entrance area outside. So he got busy this morning (with the girls help) and they got so much done. They even moved the cars out the garage and swept that out. He noticed that the owners had a fire going so he emptied his fire drum and took the latest lot of rubbish down there to burn. 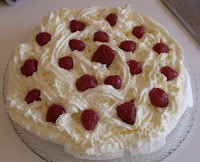 Then Rachel and I made a pavlova. She had gotten a "Pavlova Magic" in her food hamper where all that you add is water and sugar. We had bought the cream and a tin of strawberries to put on top and the result looked quite good (it tasted good too). I phoned our old neighbours to find out if they were around for us to bring it for afternoon tea. We had a lovely visit with them. Lynn actually still had a birthday present for Ruth - so that was a nice surprise for her. 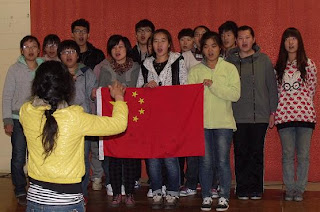 In the evening we headed out to a Community Concert in Waipra as there were students on a cultural school trip from China at the concert too. Rachel and I really enjoyed chatting to the teacher afterwards. We had a little bit of a Chinese lesson and learnt how to pronounce Chairman Mao correctly. We also learnt that depending on how you "sing" mao (as it comes down to the tune of the word) it could mean cat, hat, fur or even money. No wonder it's such a hard language to learn. 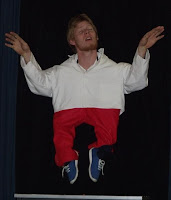 The highlight for the night however was definitely the team of two men who had a number of different items they put on including doing some Charleston dancing, a hat show (with loads of different hat tricks - some of which were incredibly funny) as well as the famous "little man" act. This was hilarious and including a Michael Jackson song and the theme song from Chariots of fire among others.
All in all a great day. Thank you Lord.