Thankfully Brendon took a photo of my 32 week tum yesterday as today was really cold and cloudy. I don't think it's changed much over the last few weeks but he says it's bigger. Maureen is coming to see me tomorrow and then her visits change to every 2 weeks. That does make it feel like we are in the last stretch now. 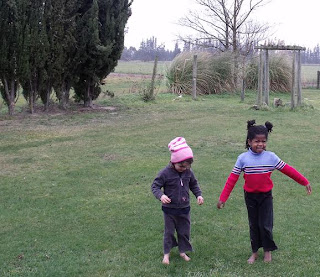 The girls got all excited when they spotted a few flakes of snow. We let them quickly run outside and then they were more than happy to be indoors - nice and warm. We had originally hoped to go on the Weka Pass Train today - but the weather really was not suited to being on an open train. The girls only really understood about it being too cold once they had been outside. At least I have the website now and can check which weeks it's running.

Steve gave us a pack of Patoa bacon a couple of weeks ago and we enjoyed it for lunch today. So nice to see a picture of the farm on the packaging.
Posted by Buckland at 9:00 PM