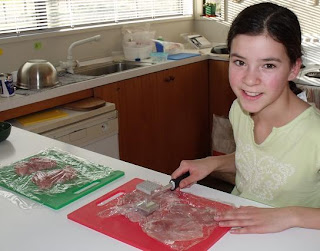 When Rachel and I came back from Auckland Ruth had said she would like to eat the food that Rachel had made. So I decided her birthday would be a good day to do it on. A special dinner for a special day.
It also happened that the local shop had a special on skinless - mostly de-boned chicken thighs. I have never seen them before - let alone have them on special. So that was an added bonus. They used de-boned skinless chicken breasts at the masterclass - but Anna had said the thighs would be nicer. First step is to flatten them out (after I took all the bone out). 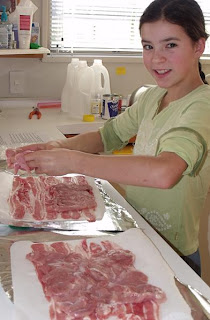 Then you layer the chicken on pieces of bacon. They used a fancy meat (similar to bacon but more salty and thinner) for this at the masterclass - but again - it's something I have never seen in the shops. The bacon worked fine though. 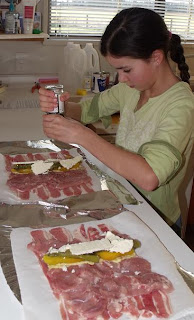 Then you fill the bonbon with garlic butter, asparagus (we had to used tinned - I don't know where they got their fresh ones from), capsicum (we could not get red so went with yellow), cheese (we used some feta from Rachel's prize - the recipe has a different fancy one) and salt and pepper. You then wrap your bonbon up and cook it for 40 min at 180. Allow to stand before cutting.

Rachel also made the vegetable fritters and we all thoroughly enjoyed the meal.
If you use red capsicum it looks even nicer as the yellow was lost next to the green asparagus. But part of Rachel's lesson today was that you don't have to always have exactly what the recipe calls for. Improvisation also works at times. :-)
Posted by Buckland at 8:59 PM