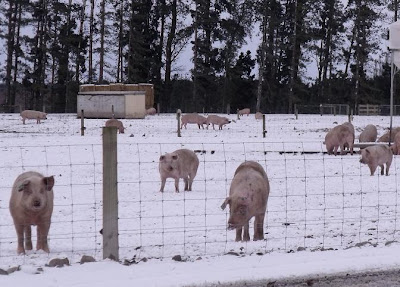 By 2:30 Brendon was home which was lovely. He had some afternoon tea and then we got everything ready to head out to do some sledding. It was so strange seeing the pig farm all covered in snow.
The spot on the farm that had been recommended for sledding had almost no slow on at this stage. Brendon was amazed at how much it had melted in just a couple of hours. The neighbour however had a bit more snow on his section of the hill though  (the hill changed angle at the fence line and so this section obviously does not get as much sun and was not as warm). Brendon hopped over the fence to have a go but did not get the sled straight enough and came off - much to the delight of the older girls.
He tried again and had a short but successful slide down and so the girls hopped over and had a few goes. Nice and gentle for Hannah on the glider. 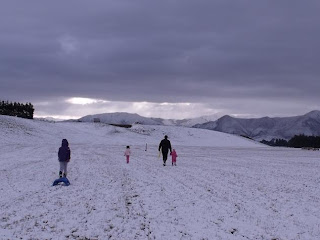 Even though it looked like a long way off we decided it would be worth the walk to head over to the section that looked a lot whiter further on. 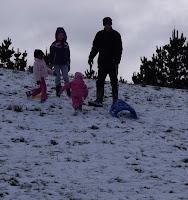 Our first stop. It was quite a bit steeper here as you can see by how much effort little Hannah had to put into getting up.
So they had a few turns in this section. A much longer ride than the first attempts so they were all very pleased. 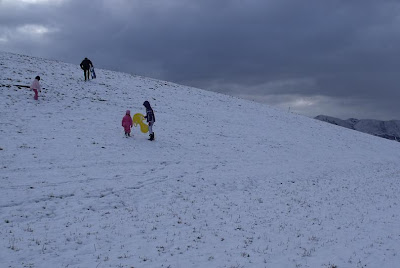 Then Brendon decided to head over to the right a little more and get even higher.

And although a little more bumpy - the speed was great.

Ruth decided she wanted to go right from the top too. I got a bit worried when I saw her foot slip a bit - but she did a great job staying on.

Rachel then got the courage up to go from the top too. She found it VERY bumpy though - hence the ow, ow, ow all the way down. 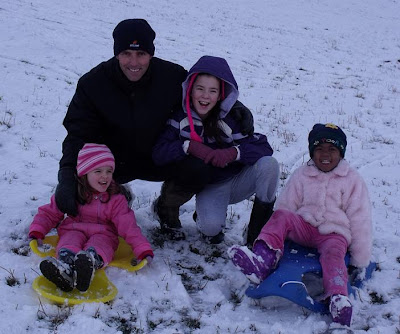 What an amazing afternoon of fun. 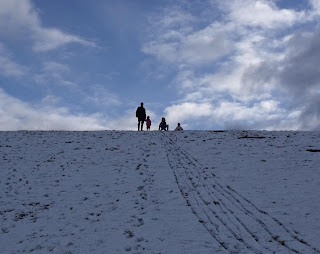 A great hill for sledding. 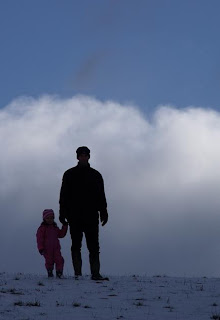 Dad and daughter. Waiting for the sled.
Eventually we had to say "last turn" so that we could get home before anyone was too wet. At least this last one for Rachel was not as bumpy.
Ruth had a nice fast last ride too. You can see how nice and light the snow glider is. Great for little ones as they can carry it themselves. The sled is quite heavy so this is great for Ruth.
Hannah finally decided she would join Dad on the sled right from the top. It was quite bumpy though and when she told Grandpa and Nana about it she said "there were 5 bumps". 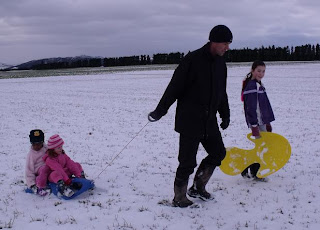 I wondered how the girls would manage with the walk back to the car. Thankfully Dad gave them both a lift back half way and then Ruth was fine to walk the rest of the way.

On the way home I got these photos of some piglets enjoying the snow. 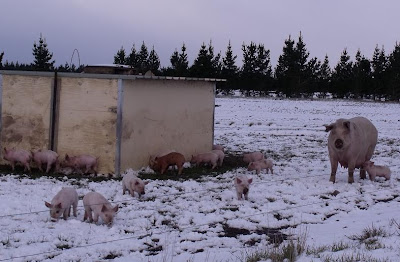 What a memorable day. Thank you Lord!
Posted by Buckland at 8:56 PM