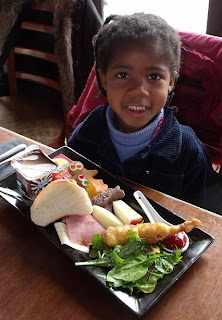 We normally try to do something special on the girls birthdays and this year Ruth's choice was to eat at the Mud House (a very fancy restaurant about 30 min from us). For months every time we drove past she would ask about going there. So eventually we realized this was going to be a really special treat for her. A very strange request for a 5 year old - but she was thrilled. She has been looking forward to this for many months now (well over 6) and so I am sure she will remember it for quite some time. 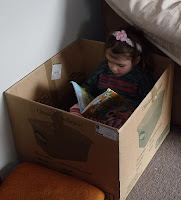 I had to smile at Hannah sitting reading in this box when we got home after lunch. It always amazes me how much fun a box can be. 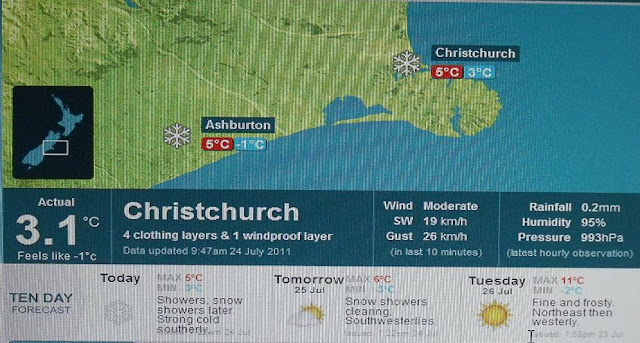 The forecast for today. SNOW!!! Before we left for lunch the girls enjoyed watching a few snow flakes falling. There has been no rain - so that's been different. There is no question of rain / sleet / snow. It's very clearly snow - but not a lot. By the time we had left it had stopped but the girls keep checking and hoping. 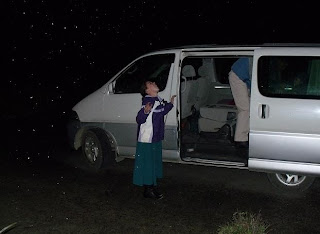 Just before we left Bible study they got their wish. It had been snowing for a few minutes before we left and we could already see some snow collecting on the floor and the car. So the excitement levels were incredibly high.
Rachel enjoying catching some flakes in her mouth while Dad helps the younger two get buckled in.
They loved watching the snow as we drove home. It's incredible how excited they were about it. 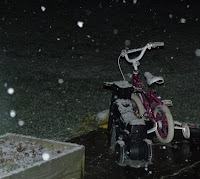 With light shining out the kitchen window we could enjoy watching from the lounge. 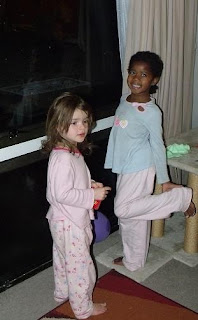 It was nice that they got to watch it a bit more before going to bed. Now the hope of having a white garden in the morning is a very real possibility. 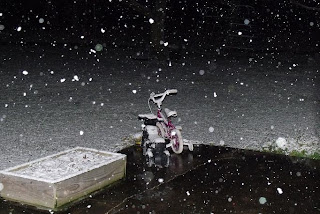 Just an hour and a half later the extra snow that had fallen was quite visible. When I was up at midnight though (a "normal" nightly trip to the bathroom for a pregnant lady) I had a look and the snow had stopped and there was not much more than at 8:30pm. So it does not look like it will be as much snow as we had 3 years ago. It also sounds like Christchurch has had loads more. I can see it's going to be a fun day for many people tomorrow.
Posted by Buckland at 9:00 PM