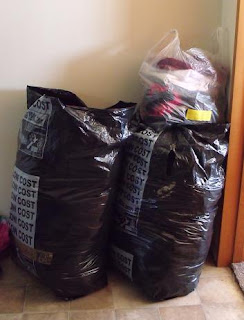 As the girls did not want to join Dad outside with gardening at 9 this morning (it was still quite cold for us - although not for him) he said he would stay in and help me with some clothes sorting. We managed to sort through the whole of Hannah's cupboard (which was totally overloaded) and get out all the clothes that are too small for her. She was not that interested in being a model so we each got an item that we checked on her and knew was just right (either pants or shirt) and then she could go off and play. It was so nice doing this with Brendon, it halved my work load but the company was the most appreciated. We ended up filling a black bag with all the clothes there were so many. I also managed to contact a lady in the area who has a 2 year old and she was very thankful for the offer of the clothes. I think she will get a bit of a shock as to how much there is though. :-) The 2nd bag was from all the things that Rachel is giving away - mostly of things that are too big for her. We have a few friends who have passed clothes on to Rachel but there are just too many (a girl can only wear so many pairs of pants) and Rachel has also been able to be honest about what she knows she will just not want to wear. So although she has a number of pants and tops that she has added to her wardrobe as well as some that she looks forward to fitting into some day - it's been great to clear out the extra.
After lunch I was so exhausted I headed to bed for a nap. Brendon then had time to get into the garden and get a few things done. So it was a nice quiet but productive day.
Posted by Buckland at 9:00 PM