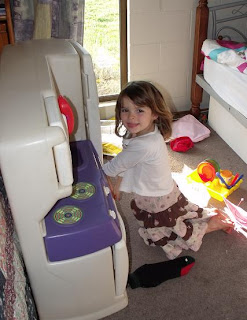 Although there was no Music and Movement this morning I made sure we got to the toy library. For a while now when I tell Hannah it's room time in the afternoons she comes out with "it's boring". So at least today she had something different to play with. No more whining at room time. :-) We can keep the toys for 2 weeks, so every two weeks she can have a change.
We did see Sarah at the toy library though and she asked if we would be attending the show at 1:30. We had not originally planned to go but decided to head back into Hawarden after lunch. The show was based on the Wizard of Oz so it was nice that the girls recognised some of the songs. They were so pleased to have gone to watch it.

Rachel was also VERY pleased today to get her Delta Math book finished today. As she now has all the Narnia audio books on cd I had surprised her by buying one of these funny toys. The other girls got one at their last birthdays and even though it's a funny little toy Rachel was so pleased to have her own. 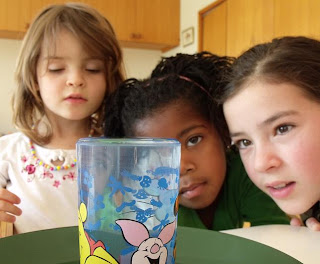 We even managed to get some water experiments done before we left for the show. The girls were so excited to tell Dad that water has a skin. 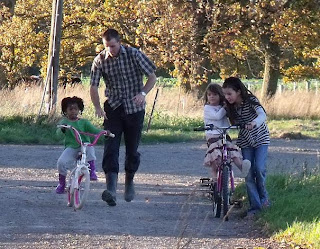 And Dad got some time with Ruth on her bike again. She is doing really well. It's just hard when you only have gravel road to practice on. A fall could be quite nasty - so Dad keeps running along while she learns. Rachel was a great big sister and gave Hannah a few rides on her bike.
Posted by Buckland at 9:00 PM